Hey guys,
Does anyone know of another type of glue I can use for gluing acrylic to acrylic? I used E6000 for this project but the spray paint I had used on the back of this clear acrylic started to bubble up

For clear acrylics, most folks use Weld-On #4 (or SciGrip now). It’s a thin runny solvent that actually causes the acrylics to melt together, and it’s really hard to use without having it get all over the place. But it’s very strong.

It’s clear acrylic with spray paint on the back to get that gradient effect. Thanks! I’ll try that out!

LOL, i hope you are using that kanji for it’s seasonal meaning rather than for your bookshelf!

Ohhh I looked it up lol. This is actually only part of the symbol

Ohhh I looked it up lol

LOL!
Yeah, in certain areas of Osaka or especially Shinjuku you get to see lots of variations on its usage

best laugh of the day. Thanks.

They make a medium body Scigrip that is much less runny and is easier to use. I use this frequently to adhere 3D-printed PLA parts.

I actually have some of that. And it won’t cause the spray paint I have on the back to bubble up?

I have no idea…you’ll have to test. If you are gluing pre-painted parts there’s always the chance that the adhesive will react with the paint.

With one surface painted any of the weld type products will be a problem. Either the paint will act as a barrier preventing the weld or it will be permeable which will likely cause degradation in the paint.

Depending on the use, rubber cement might work. Coat each surface and let it dry. Then attach the two pieces. Letting it dry first gives you a stronger bond but once the parts touch you can’t reposition them so you need to get it right the first time.

As I was typing this I had another thought. It may not be that the glue is interacting with the paint but rather that the paint is not adhering to the acrylic. If the paint has a poor bond then the type of glue isn’t going to make much of a difference.

Also, make sure the paint is fully cured before gluing.

Thanks! I’ll test it out!

You might also try good old hot glue. My guess is it would be gentle on the paint. You might need to rough up the opposite surface to get it to stick. No way around doing some tests any way you go…

I’ve had good luck with this stuff. It’s very watery and it can be tough to control. It’s bonds very quickly so that can be a good thing or bad depending on what you need. Titebond makes several versions with different viscosities though so you can get thicker/slower moving glue if ya need. 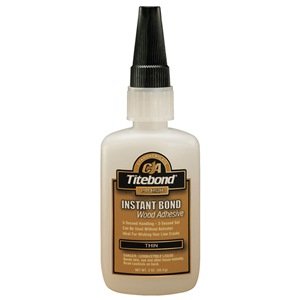 The kanji (Japanese Character) he posted has a couple of meanings, this is what makes Japanese such a fascinating language, each Character has different sounds and different meanings.

Traditionally it means Spring (as in the season) and ‘spring’ (as in the time of life - i.e. youth)
However it also has the meaning of love, but mostly sexual love, and this has been taken another step to be used in words like:
春画 shunga = pornography (‘love’ + ‘pictures’)
売春 baishun = prostitution (‘sell’ + ‘love’)

Japanese is such a fascinating language once you learn to read and write it.

For me the mind = blown moment was when i was translating The Chieko Poems by Kotaro Takamura (this is not my translation BTW).
The way Takamura used the Japanese Kanji (character alphabet) to carry the emotion he wanted to share was awe-inspiring from both a poetic and linguistic POV.

This is reflected in the immense world of puns and alt play on words that occur in the Japanese culture. I watch loads of anime and I love the subs. My personal favorite for this was my bride is a mermaid. They will use anything to pop between meanings.
“Written mermaid, pronounced chivalry.” was a frequent saying. The Kanji is very different, but the spoken is quite similar and so in Rōmaji becomes a play on words. So I laughed everytime it was said.

Yeah, our monastery is connected with the Ikeda family and wife of the head of the Ikeda’s is Princess Atsuko, the Emperor’s sister.
We used to host formal events for her and her noble friends (i mean essentially we were her monastery so if she wanted a shin-dig we weren’t gonna say no!).

They used to get together and, you know how some families play pictionary or charades? Well these parties used to have no improvisation and incense ceremony - wild times.

The other thing they used to do, and my Roshi was always pulled into this because he was very skilled, was pun competitions based on making minor plays on the kanji used in words… i would not consider myself a kanji neophyte at all… but man… this stuff was WAAAAAAY over my head - they loved it though.

it’s really hard to use without having it get all over the place.