The magic fingers thing has gotten away from me a bit. I set out to make a single box but the fingers were too big so I tried again and the fingers were too small so I put the one with too big fingers with the one that was too small and some bits went together fine but big could not be with big on any seam and small not with small so that took another cut and that made three boxes, then I ended up with a lid piece on the bottom so that was another box to finish and so on.

While all this was happening I needed a box for my tablets and something to cover the tissue box.

I also made one top to scale but have not finished it but somebody will make some comment about scale, so I added some scale. I had large scale tops designed for the tablet box but they each revealed bad spots in the wood so even painting them did not fix the problem, and as I can’t seem to find them at this moment I will have to add them later. 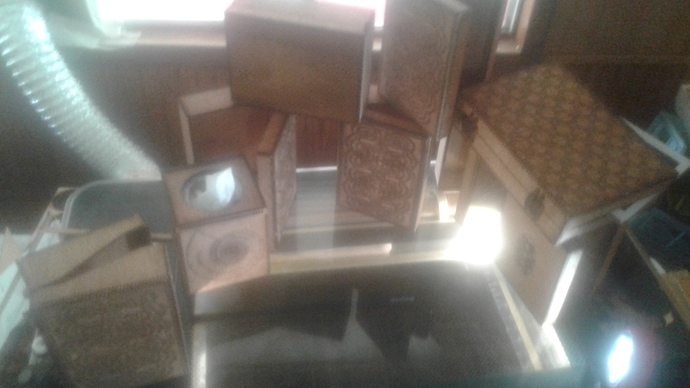 Lovely work. I can’t tell you how many box sides, tops, etc. that I can’t throw away and are just waiting for matching parts.

but the fingers were too big

Have you seen this? Does not have to be a large change, any little bump would do it.

are just waiting for matching parts.

I have tried to have a standard finger size for things made of the same thickness material and where possible at least one standard distance per box so at least two faces can steal parts from other boxes.

All the boxes in the picture have fingers at 4 mm on center.

Nice work. I too have many pieces waiting to be matched.

Does not have to be a large change, any little bump would do it.

That would depend a lot on the material used, solid wood, acrylic, and perhaps oak or birch plywoods might do ok, but the Lauan or so-called Revolution Plywood are too weak and break a lot as it is. the built-in-hinge is strong enough once glued and assembled, but I have had to replace the pin for the hinge with a bamboo skewer fitted in a saw-cut taking out the filler between the outer plys and running the length of the piece.

In other craft arenas … Unfinished projects are often referred to as UFO’s … Looks like you are conquering yours!

I did look at that tissue box and decided I could make a lamp of it. So this is my first rectangular lamp… 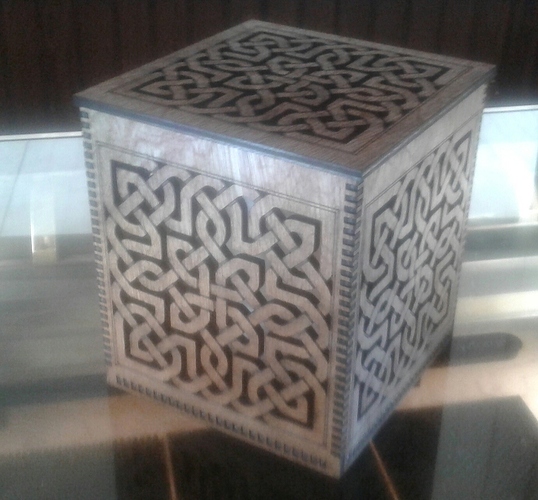 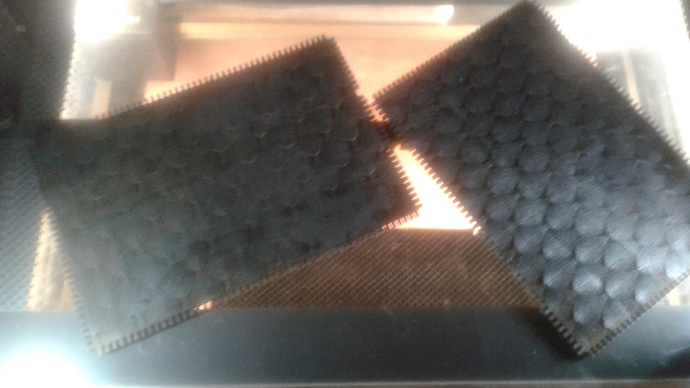