Just had a family wedding earlier in the month, and I decided to take on the guest book… with a twist. 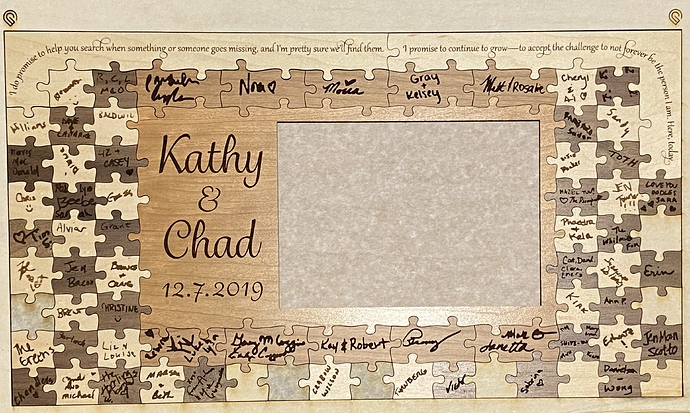 Maple/walnut/cherry PG (color choices not mine, but also not the one getting married sooooooo). About 18"x10".

There are 9 extra pieces that I’ll leave to the couple to fill with people who couldn’t make it. Quotes along the top are from their vows.

I’d share the pattern, but it’s only useful if you have 10 family members and 80 guests. Instead, here are the directions.

Made a 16x10 grid. Saved the SVG. Went into Illustrator and chopped it up using the direct selection tool (A).

Drew a rectangle selecting all the lines in the middle 60 pieces, careful not to grab any of the curves along the outside that I wanted to keep: 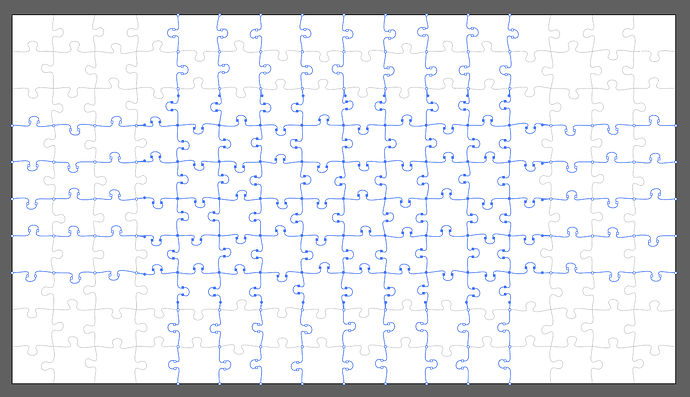 Hit Delete and they all went away. (Illustrator will show you the remaining vectors still connected to the puzzle, but once you click away, they’ll disappear.) 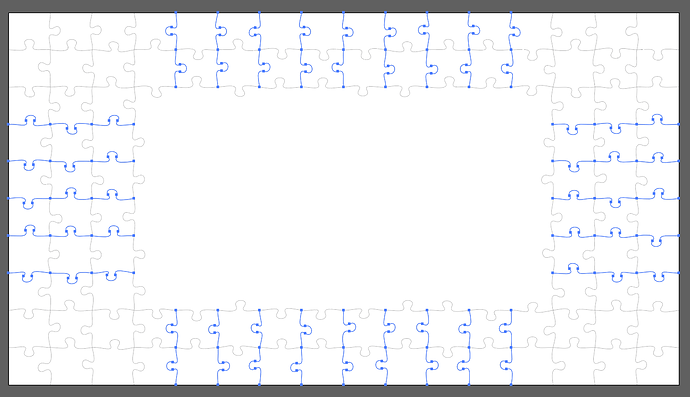 Did the same with the pieces above and below to make double-sized ones for family and close friends.

Did some text magic. (Outside font is Gabriola, with a few swashes. I applied the text to a path to round them. Inside is Grafolita Script, but beware: the characters were not connected, so after creating outlines I then found I had to Unite them in Pathfinder, or else they came out with the overlapping bits not being cut in the GF.)

Then lots of cutting. I assembled the mixed woods in the frame, then marked the back x/y coordinates (in Arabic so nobody could cheat!) and with a great big UP arrow, which only 10% of people mixed up. Everyone took a piece from a box (first inside, then outside, family pieces separate), and signed it in medium or fine Sharpie.

I then engraved the names a few at a time, centered on the GF, just using Trace, in high quality. It was fiddly, but I made it work with a handful of white post-it bits to nudge the image processing. It gave me stuff to pew pew and a bunch of noise to knock out, which I did, and then marked the recommended cut stage to Ignore, the engrave to HQ, and it did its thing.

If I had it to do over again, I’d have printed the pattern on paper, maybe double-sized, had them sign that, and dropped it onto the pieces in Illustrator, which would have been much more time in AI, but much less time back and forth to the GF. Or putting painter’s tape over the PG backing, so it’d have stayed white. LEARN FROM MY MISTAKES.

I put the Snapmarks down so that I could save the center bit for last (and actually, I’ll probably do it one more time in the end to fit it perfectly to the Fracture glass photo that’ll go in that 5x7 slot, because it’s actually more like 4.8x6.4).

Final steps will be to mount the puzzle and photo onto contact paper, and frame it.

Total time on this was probably a dozen hours of actual work. It just felt like 300.

What a great idea!!! Love this!

I wish I was that creative. I’m sure they’ll love this.

What a great idea - and thanks for sharing your process.

Would it have worked if people had just signed the finished piece and you didn’t engrave over it - just varnished it/sealed it?

How will the couple display it - won’t all the bits fall out if they hang it on the wall? Will it get framed?

This is a fantastic idea, so much better than the standard guest book!

They’ll get glued down and framed.