Fair enough. I should have said “my interpretation of the thread author’s design, which is itself an amalgamation of artwork sourced from the internet.” - but that doesn’t exactly roll off the tongue.

The full project did involve quite a few other elements, as it’s housed within a puzzle box that was crafted using materials and tools other than the Glowforge. Some of the components for the box are in the same Google Drive folder.

Per fair use guidelines,

IANAL but fair use only applies as a defense in cases where the rights holder is aggrieved. For the two of you there’s probably not enough will to pursue it but I suspect that if Hasbro or WB or JK (More precisely the Blair partnership who manages this stuff for JK) went after this your files would be taken down at the least, and possibly damages sought.

The more direct offense here is one of etiquette and common courtesy. Hiding behind something as flimsy as a fair use claim and the clearly baseless “transformative“ assertion won’t disguise the fact that you not only ripped off his work but then shared it in his own thread. Then because you knew it both wasn’t cool and was a violation of forum rules you put it on drive instead of here. You are absolutely sharing someone else’s work and you know it.

In the end, while you may be in the clear legally with @pubultrastar, you’re definitely not making a classy impression here. Since it appears to me that it’s a violation of the forum guidelines on sharing someone else’s work I’m gonna flag it. GF admins can make the call whether or not it stands.

Very well. I apologize, as I definitely seem to have violated the intent of the rules. Imitation is the finest form of flattery, and I meant no harm in the reproduction or sharing.

The fair use aspect was in regard to the copyright holder - Hasbro, WB, JK - I wasn’t trying to hide the fact that I was posting what is largely @pubultrastar’s idea. If I were, I wouldn’t have posted it as a reply in his own thread as you so directly pointed out.

I posted the file with the intent to help a few other members of the forum. If I take a step back and look at it from your point of view, I can appreciate that everyone else should have to make their own file the hard way if they want to create a similar project.

what is largely @pubultrastar’s idea

That’s not even clear. There are many home brew potter monopoly projects out in the wild. Here’s one from 2016, well before this project: 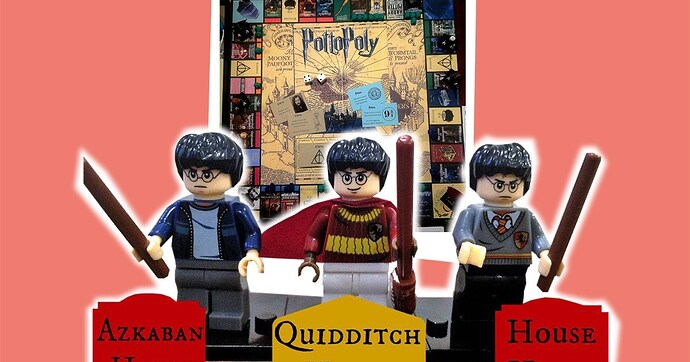 No, this is not a dream.

Normally I wouldn’t split hairs but this entire topic is about which hairs to split, so… the issue to me isn’t one of copying the idea, it’s copying the work he put into devising the execution.

Let’s talk about your “coins instead of paper money” idea. Now that I like, and it’s a fresh execution. I know you did it because you were low on time, but if there’s a next time and I were doing this I’d lean into it and make the coins a featured design element. That’s a good concept.

FWIW he also used coins in his final design, with what looks like metallic/mirrored acrylic. Very polished design. I cannot claim that idea either.

The files are not available

I can still save them directly from your post via right click. This is the normal way people share designs, so I’d say they’re still shared.

Heh i thought he did paper. It’s been so long I forgot the details. I’ll have to keep the coin concept in mind if I ever build a board game. Usually I don’t have the patience to actually build one, they’re involved projects.

I have obliterated the post - no links, no pictures, nothing.

For those reading this far, all you’ll need for the board are a dozen or so images from Google, the fonts, and a blank board template.

Because the board is large (probably the max dimension of your machine) I would recommend breaking the file up into pieces that will optimize travel time for the laser. Also worth considering higher power, higher speed for the same etch depth and faster cut. These steps combined saved me nearly an hour of burn time for each half.

I think that is all the help I can offer without attracting the ire of He Who Shall Not Be Named.

Just to be clear, I don’t have a problem being the inspiration behind a personal project. In fact, when someone asks me for the design on any of my monopoly boards, I point them to a template they can purchase to add their own graphics to, and list the fonts I used. My issue with this is you sharing the design I came up with on google drive. I spent a ton of time coming up with the layout, and the different aspects of the game, what properties to use, etc. You copied most of that, and found many of the graphics I used for my fan art board. I am flattered that you like my design, and appreciate you removing the link. It’s nice that you’re trying to be helpful to folks wanting to build their own Monopoly boards, as that is what the forum is about. Keep posting, but be mindful of the original creators if you draw inspiration from.

Thanks for the reply. I definitely respect the work that goes into an original design - it’s far easier to replicate what’s already been laid out than it is to innovate. You did the heavy lifting and it should be your choice to share or not. I’ve been on the other side of the discussion before, and that’s why I have absolutely no problem taking the files off the site.

I can only hope that random netizens spring to the defense of my intellectual property as aggressively (and abrasively!) as they did here for you. Cheers!