Has anyone cut foam before?

Why is acrylic crossed out?

Maybe because it’s 1/2" and their machine can’t handle it without risking fires?

Thanks for posting it!

Working aside from Proofgrade materials Beyond the Manual

This doesn’t contain settings but it contains good info for those who wonder what they can or cannot put into their laser:

Safe and hazardous materials Beyond the Manual

Hi, friends! I just found this super helpful chart online, and wanted to share with you. Clearly outlines what materials are safe to cut and what are not, and why.

There is so much I want to write.

All you have to do is point me to the source where someone was poisoned, or died from lasering PVC.

I’m not debating whether HCl is bad, what I was seeking was affirmative proof that its creation by lasering PVC could lead to death as you implied in your earlier post.

It comes down to exposure. A vented laser is risking the machine more than the operator. The concentrations of HCl in the air that you’re going to breathe simply isn’t enough to injure you unless you’ve got your mouth pressed to the vent outlet and you’re doing a significantly long cutting job.

The scientific illiteracy exhibited by positing that every potential hazardous chemical coming from a burning material is equal in effect as the apocryphal “they used it to gas troops in WWI” does not help with rational risk mitigation.

It’s sufficient to say don’t laser PVC because even in small quantities it will lead to unrecoverable machine damage. “And you could die!” is about as likely as you being hit by a meteorite as you’ve got your face pressed against the vent.

It’s simply not helpful to scare newbies with this kind of specious warning. They’ve got enough to worry about with things catching on fire to be wasting one brain cell on dying of a gas exposure.

I’ve spent a lot of hours treating CO poisoning, Cl poisoning, hydrazine exposure and others from things as innocuous as mixing bleach and ammonia to know what exposure levels are lethal vs irritating or undetectable.

Check the SDS (the MSDS is no longer the standard or appropriate document btw) for the air you’re breathing when you go for your nightly run. You’ll wonder how you made it back alive.

The whole point of the warnings not to lase PVC is that if those directions are followed, no one dies. So pointing to an article where someone died is going to prove a challenge. Maybe in the “Florida Man” archives…

The chemistry is very clear. It is trivially easy to find information on this subject and it all says exactly the same thing. Burning PVC is an extremely bad thing to do and a laser cutter burns PVC.

If you don’t not to believe, in spite of everyone saying exactly the same thing, and you’re not alarmed enough to do any investigation of your own, so be it. Free will can be a force for both good and bad.

However, if you have others you’re exposing to the risks outlined in this thread, you owe them the courtesy of at least giving them a warning. Something like “every single person in the GlowForge forum said exactly the same thing, that lasing PVC is very hazardous. I don’t believe them and don’t intend to do any research on this myself since my conviction is strong, but you might want to do some quick google searches or maybe just go outside while I run this print…”.

jamesdhatch is, or was, an EMT and teaches classes on laser cutting. He has done research and is asking for case histories, or another form of documentation, of people being harmed by the amount of aeorsolized HCL a laser cutter produces. As an instructor he has a responsibility to teach what is documented and that is all he is asking for. That a laser cutter will produce enough to corrode the inside of your machine is not in doubt. That it will produce enough, when diluted by the volume of air around a machine, to cause more than mild irritation, needs to be taught if the math supports it or there are case histories. I take his posts as a vain attempt to rein in well intentioned alarmism and not to dismiss the danger to a laser cutter of lasing PVC or any other material containing chlorides.

I take his posts as a vain attempt to rein in well intentioned alarmism and not to dismiss the danger to a laser cutter of lasing PVC or any other material containing chlorides.

Thank you. One person read what I wrote vs what they assumed.

In uppercase so there’s no doubt I AGREE CUTTING PVC AND RESULTING PRODUCTION OF HCL IS HAZARDOUS TO THE LASER CUTTER (MACHINE). I ALSO AGREE THAT HCL IS A HAZARDOUS CHEMICAL.

Hopefully that will forestall any further drivel that I’m ignoring what everyone else “knows”. I know that too.

I am simply looking for any data-driven proof that laser cutting PVC can or has ever caused death or serious injury to the human operating the laser which was claimed in the initiating post here.

Based on the responses to my request for proof (& my own research) the data to support the claim does not exist. I can only presume that it’s just one of those “don’t run with scissors” passing on of unsupported lore statements vs anything based in fact and who cares if we scare some newbie so much that they don’t even turn their machine on.

I’ve been soldering since I was 9 (43 years) - all lead based. In small rooms. Yet, still, I live and breathe…

Unless you are using way too much heat the risk of that is very small indeed.

Yet, still, I live and breathe…

Well undoubtedly your days are numbered and no one will feel bad because everyone knows lead is bad and breathing lead fumes will kill you so if you persist in perpetuating decades of bad behavior, it’s your own fault!

I have this little twitch…

Haha. Tomorrow playing with SLS, but tonight doing major renovation on the home maker space… And was on the road for the last 10 days…

renovation on the home maker space…

My wife has decided that now that all the kids are out of the house she’s commandeering one of the bedrooms and turning it into her space. Putting in special tables and such so she can sew or needlepoint prep/finish work, etc.

My maker space is either cold or dark - garage or basement

My maker space is either cold or dark - garage or basement 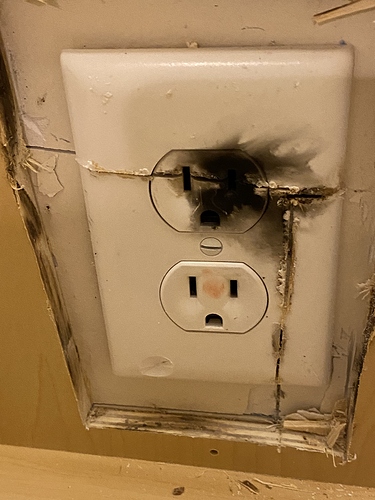 All in the same day?

Well I wouldn’t have left it smoldering for days…, it was actually within 5 minutes… the bolt was supposed to go in right above the outlet into the stud. Like maxwell smart, “missed it by that much!”. It was a pex pipe which shreds like butter, it requires a pro and the special tool to repair. Luckily each zone has a cutoff valve, but still got soaked.

I liked. For your description not your situation.

Wow, just wow! And he hit it in two, not just one direction. May I ask how old said son is?