Has anyone tried to engrave a challenge coin - a real coin?

We have been asked to engrave names on some challenge coins ( for a military unit ) to give as awards, anyone ever try this?? Thoughts? Advise?

You won’t be able to engrave into a real metal coin with the Glowforge. You could mark it with Cermark, moly-d, or even maybe water…
There are various colored acrylics that try to mimic the look of metal, and several people have done wooden nickels; a wooden nickel can be painted or treated with rub-n-buff for a metallic look.
You could engrave a wooden/acrylic coin and then use it to create a mold to cast real metal coins. 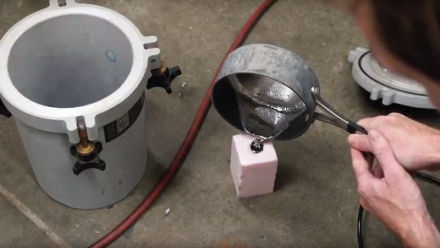 Casting metal parts from 3D-printed plastic or Styrofoam models is all the rage these days, and for good reason — casting is a way to turn one-offs into mass-produced parts. Seems like most o…

Likely best to check with a trophy shop or jeweler, as likely need mechanical engraving, especially if the only area to add the names is on the edge (and google). Many places already have the jigs and set up to do this–though not sure how close to you they’d be to your location…

But if room for the names on the face of the coin, then Cermark should work–but it’s going to look more like it’s printed, not engraved, based on samples of it that I’ve seen (as it’s more a chemical reaction between the coating and the metal, not physical removal of the metal as lasering other materials results in).

Thank you. This is what I was afraid of, unfortunately. But I would like to try the Cermark. Where would one purchase that product?

I’ve only looked at their website, no idea if it’s sold any other way… but usually sites of such special product will indicate if they have distributors or not.

You can buy it from Johnson Plastics. It’s not cheap.

I saw some on Etsy for a bit less (or at least smaller quantities).

Thanks. I will check there also.

You could engrave a wooden/acrylic coin and then use it to create a mold to cast real metal coins.

Well sure, if’n you gots a 3D SLA printer!

I’ve created a bunch of coins, but have not tried lasering names and such. Obviously, the metal itself would be an issue. Most of mine have been a zinc alloy. Don’t have any idea how (or if) it would mark with laser.
If I were to design a coin to be lasered, I would create a space for the desired engraving and have it color filled. I’m pretty sure that whatever type of paint they use for fill would be easily lasered. I have one that I’ve done with a large filled area and may try it just to see if it will work.

yes, if we were to have them made that is a great idea, however these are pre made coins… I think we are going to try the cermark and see what results we get from that.