Having trouble with photos on slate

I’ve seen several posts on this forum where users have made some very nice slate coasters with engraved photos, so I thought I’d give it a try. I’m trying to make a coaster set for a friend that has various pictures of their pet cat. But I’m having a hell of a time handling the grayscale gradients, and could use some advice from anyone who’s had some success.

Background: I’m a longtime photographer, very proficient in Photoshop. I can alter the images easily enough; I’m just having trouble getting consistent results. I’m sure that this is because engraving on slate requires you to alter the images in a way you’d never do for printing on ink. My GF is in good working order, and I have no reason to suspect a fault with the machine. My settings for all the examples shown below are:

These settings are based on threads I’ve read elsewhere on these forums where users got good results from them. I’m using 4" slate coasters purchased on Amazon, darkened with Tung oil prior to engraving (excess was wiped off and allowed to dry for at least 12 hours first).

I’ve had very good results engraving simple logos on slate, where you’re just using solid black lines with no gradient. But I’m trying for something more photo-realistic here, or at least as much as you can get on slate. And I’ve had one success that I’m happy with - this photo below. I’ve included a side-by-side image of the source photo, and the resulting coaster:

Problem is, I can’t seem to recreate that. The two samples below are examples of the problems I’ve been having. I used the exact same GF settings, on other coasters from the same set. The photos were similarly processed, and I felt I had a reasonable blend of blacks, whites, and grays, with some gradation between them yet enough contrast to show well on slate. But the final products are either too white or too stark, lacking in any sort of smooth gray gradients.

This seems to be a clear-cut case of GIGO. But it seems to me that the source photos for my two failures above are processed similarly to the one success I have at the top. So does anyone have any thoughts or suggestions on how I can process images for more consistent results?

(NOTE: I tried the GF tutorial on processing photos for engraving, but didn’t get good results from it).

Slate: you’re not going to get a ton of variation from your grayscale values. It’s either going to be hot enough to mark (bleach, whatever), hot enough to slag (bubble), or not hot enough to do much of anything.

The approach that I would take on this is to continue using vary-power, but I would dither the image in Photoshop before engraving it, which would involve making all of your levels adjustments, etc. convert it to grayscale, and then to bitmap. The next menu will give you several dithering methods.

You could use the convert to dots setting also, which is Glowforges dithering algorithms based on Floyd-Steinberg dithering. I feel like doing it in Photoshop though gives you a bit more control. You won’t be doing a true vary-power engrave because you only have black and white, your power will be either 0 or whatever the max power you have set. Using the vary-power is the best solution for an image that you have dithered on your own, so that the Glowforge software isn’t replicating/modifying your efforts.

Original image, zoomed out a bit: 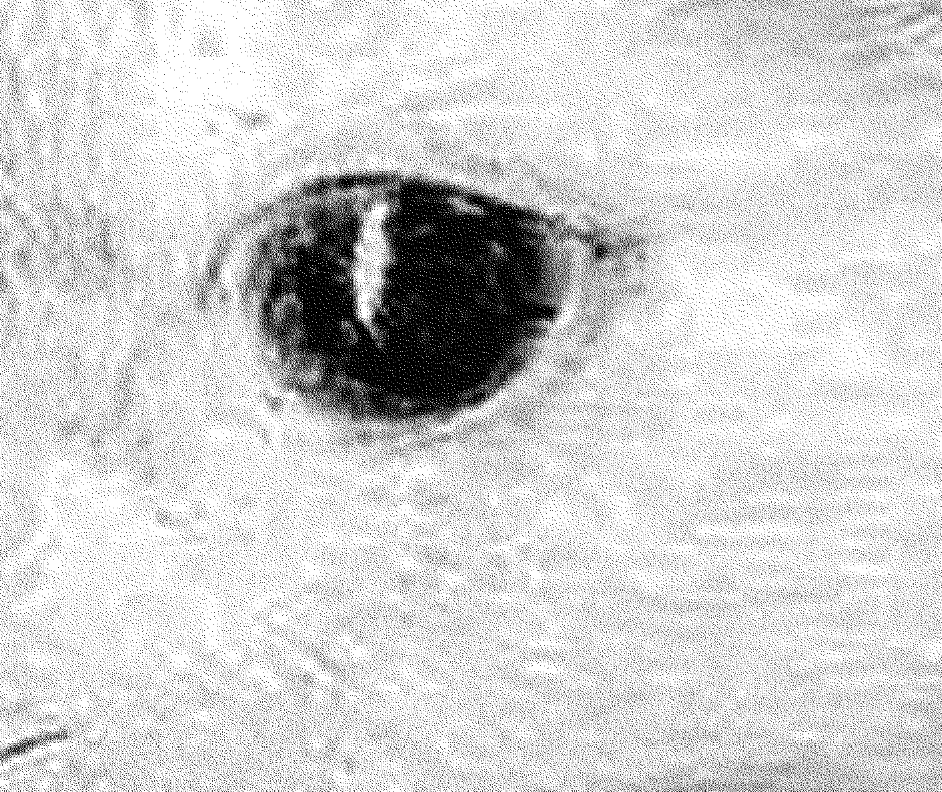 Original image, zoomed in on eye (you can see how this is using grayscale values for each pixel) 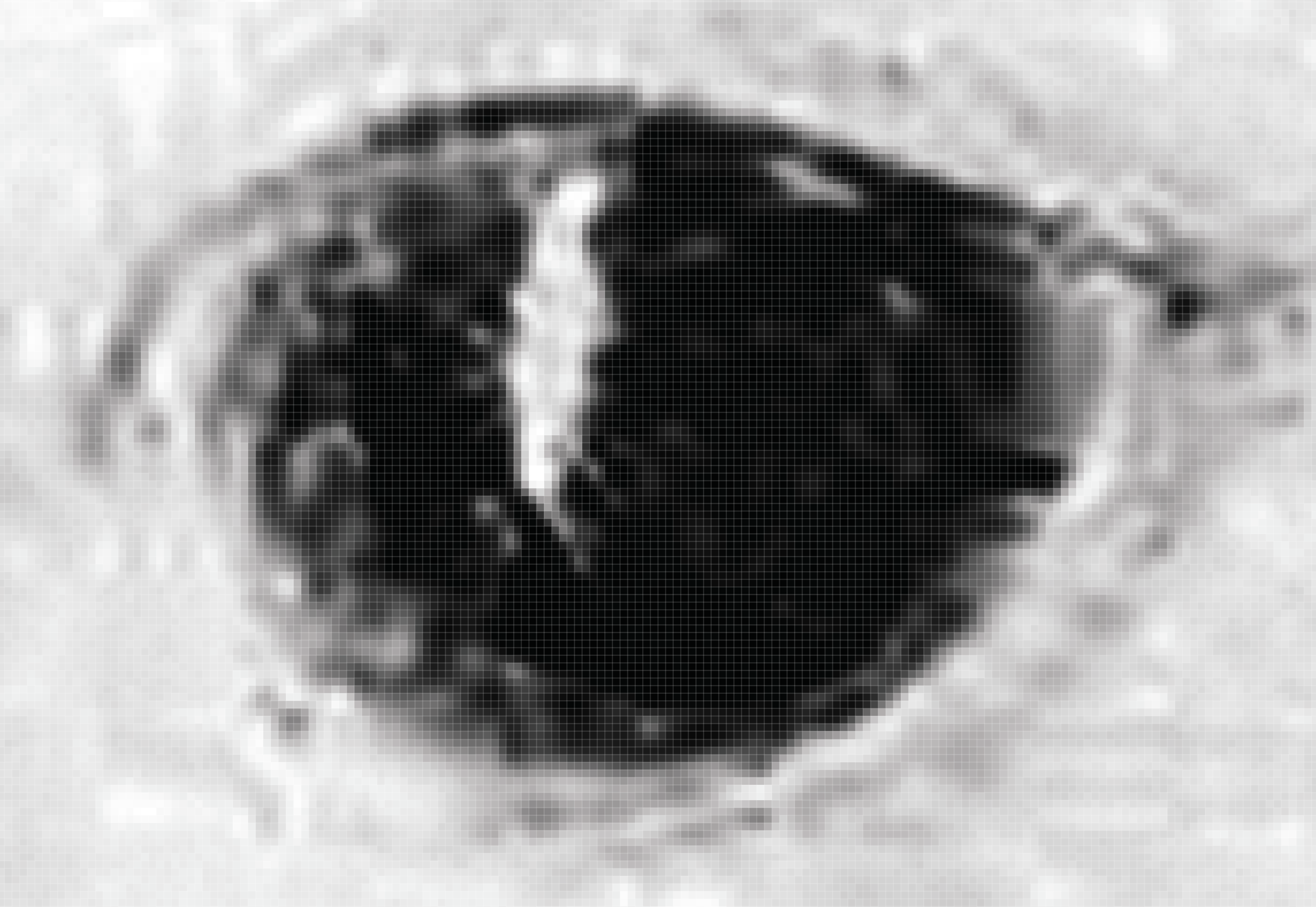 This is dithered. You can still see tonality, right? Shades of gray, etc. 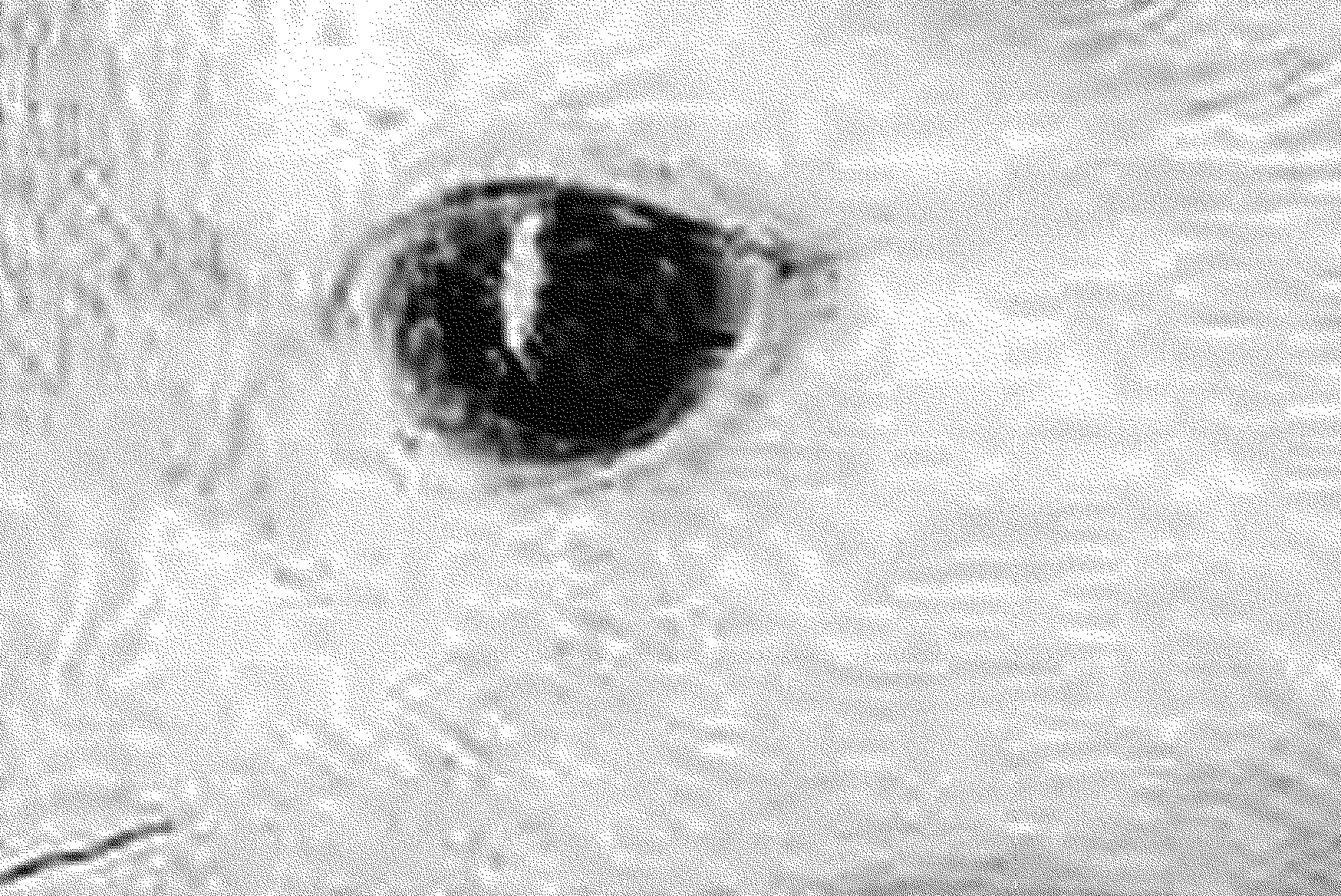 But, it’s all just black and white dots simulating tonality: 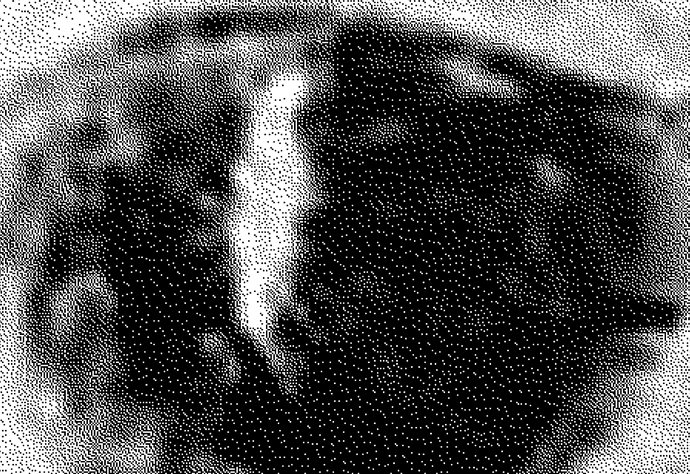 Excellent advice above. I’d go with dithering. This goes for anything that doesn’t do shades of grey well.
I use GIMP but the principles are the same.

Don’t forget to invert the colors in your image so the cat’s whites will be white and blacks will be black.

And just a workflow/testing hunt, you can use the back side of a slate coaster when your front side messes up so you get twice the testing from one piece.

I think the eyes are wholly appropriate for a cat.

Hah! You’re right! To me it looked like the cat needed to be inverted but upon closer look I can see that he already did it. Blame the odd coloring of the cat for fooling me.

I had a difficult time figuring out if it was inverted as well, until I inverted in Photoshop to see what we were working with. It can be tough to tell sometimes on natural subjects that are pushed to the high contrasts for laser engraving.

Thanks for the tips, especially jbmanning for the idea to dither the image in Photoshop. That idea to run tests on an already ruined coaster is a good one as well, since I already have a plentiful supply of those. My first attempt didn’t look much different from the previous one, but I’m thinking maybe that’s because the image has already been pushed too far into the high contrast range. Perhaps starting with the original color photos and re-processing them with a mind towards halftone dithering this time is a better approach. I’ll try that in a day or two and post the results. Fingers crossed. But I’ll keep an eye on this thread if anyone has any suggestions, especially for Photoshop settings when I do the conversion.