From so far back I bought a roll of this material from an artist that made theater props. It looks like gray cardboard but if sprayed with lacquer thinner gets floppy and stretchy and can be molded over a ball for example to make complex curves that even leather would be a challenge to form like that.

When it dries it looks like thin paper mache but is hard and stiff and waterproof. I made a bird head mask with it some years ago that never got finished for lack of the right sort of feathers I had intended for most of it and it was also a shade small for me to wear, so it has mostly just sat unfinished.

As I do not know where to find more and once used cannot be reformed by say spraying it again, and so I have been reluctant to use it up. I have no idea what the soluble plastic is, but the base fiber definitely looks like paper fiber.

I am sure it could be cut with the Glowforge, and assume that the plastic is not chlorine based but as I have no idea exactly what the material is I cannot check that.

I know there must be folk who have used this stuff routinely but without a name I cannot even Google it.

I have no idea what it is, but you’re making me want some. 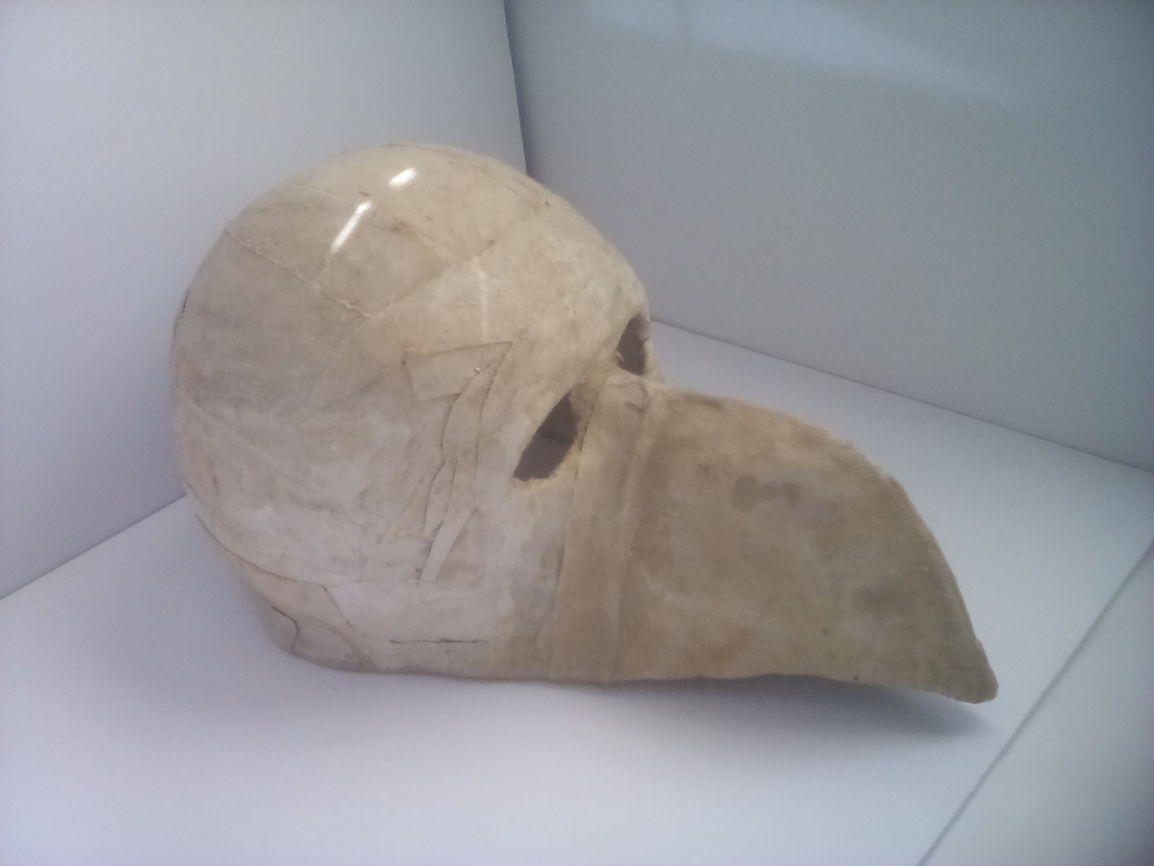 Worbla is really big in the costuming world, as is Sintra. They may be what you are looking for but I have never heard of a solvent being used to make them pliable, only heat.

Let us know if you figure it out.

They may be what you are looking for

You can cut this with the Laser (not sure about chemicals) but you would not use heat on it any more than doing so on cardboard, and before using the thinner is almost indistinguishable from cardboard.

How thick is it ?
Thanks, but as geek2nurse said, I now want some !
Or is this a cunning plot, along the lines of an SF novel I read years ago, where two teams were set to compete in secrecy, one told that the others had invented antigravity, and the second group told that the others had invented a time machine .
Deciding it must be possible, they each found a solution.
Now we know that the material exists, someone is going to invent it !

You should definitely NOT put sintra in a laser. Its PVC

Now we know that the material exists, someone is going to invent it !

If you could make large sheets of paper making it would not be very difficult. All you would need is good recycled wood or cotton fiber and a laserable plastic that would dissolve in lacquer thinner but not most other solvents (this stuff is not affected by paint thinner, or acetone) and the finer the powder the better.

Once dampened each bit of plastic goes into partial solution and when dried becomes like fiberglass but with the paper fibers instead of glass fiber and so is very strong. Some of the plastic also comes to the surface and so bonds to the molding material unless protected. Wax is not a good resist as lacquer thinner also dissolves wax.

The stuff mics at 0.04" and feels like thin leather though I recall it as stiffer a bit but at least the outer part has weathered a bit, and it is probably stiffer a few layers in.

idea what it is

While this was definitely not sold for it, you might look at some of the cast making materials as this stuff would be great for that, especially 30+ years ago when more modern open materials used today did not exist.

I thought lacquer thinner was acetone, so could you give me clarification of what it is you are describing ?
John

lacquer thinner was acetone, so could you give me clarification of what it is you are describing

They are different stuff, like toluene and paint thinner. Notably Acetone will not dissolve wax, but lacquer thinner will quite readily, a point I noted when polishing my wax models back in the days when I was casting wax jewelry designs, even exotic jewelry waxes.

Might it be mineral spirits, or even kerosene ?
I’ve got a chemistry background, but used to pure chemicals, so I’ve only the vaguest idea what mineral spirits actually are.
Likewise I’m familiar with the idea that some mixtures are better solvents than single components.
Your mention of open web fabrics set me thinking of alternative routes, like soaking a thin felt in very dilute shellac. A quick spray with methylated spirit(UK term - no idea of the US equivalent) might have a similar effect to your original description.
John

If no one here knows, ask at this big prop-making forum.

Again different issue. Mineral spirits is basically purified Kerosene. If you have a Kerosene heater or stove mineral spirits will work almost the same but be far cleaner and smell MUCH better. Again I do have direct experience in that. Having used kerosene heaters and stoves. Some folk have used mineral spirits in alcohol stoves or vice versa and lost houses or boats in the attempt as those are very different.

As you know from Chemistry there are many tests to determine if two similar chemicals are the same. Lacquer thinner and Acetone are different and aside from a different smell the wax solubility issue is a dead giveaway. You might even dissolve a bit of bees wax in the thinner to use on wood as it would be taken deeply into the grain before the thinner evaporated out. Just don’t put that wood in the laser after!

So since I didn’t know what was in lacquer thinner, I did a internet search. The quick summary is that there is no standard for what it contains, and that the low VOC ones are mostly just acetone.

Lacquer thinner is usually a mixture of solvents able to dissolve a number of different resins or plastics used in modern lacquer. Previously, lacquer thinners frequently contained alkyl esters like butyl or amyl acetate, ketones like acetone or methyl ethyl ketone, aromatic hydrocarbons like toluene, ethers such as glycol cellosolves, and/or alcohols. Modern lacquer thinners increasingly have to comply with low-VOC regulations. These formulations are often mostly acetone with small quantities of...

Interesting, as I first tried acetone to polish off tool marks on my jewelry waxes before casting the metal, and got almost no effect, but bought the labeled lacquer thinner and did very well with it. So when I was told that lacquer thinner was required to make this mystery material work and that other things would not work I did not quibble. I currently have both in the shop so I may do some experimenting.

I currently have both in the shop

Could you quote a brand, then I can try to follow your lead ?

I got both at Lowes as their Jasco brand and they are both sold together side by side on the shelf so if they were functionally the same I would not expect to see both sold as different from one to the other.

On the other hand the links are saying that what I had as lacquer thinner then might be quite different from what I just bought and have not even opened yet. It would be weird indeed if this material was like some of the ancient trees in Madagascar that their seeds can only germinate if they first pass through the gut of a dodo bird. Or in this case a material that might only exist as what I have and only work with a solvent no longer made.

Thanks for the heads up.
John