I apologize if this is in the wrong category. I have never posted here before.

I am setting up my new inline fan (Infinity S6) and I am getting horrible strong odor still. I have had it taped up, I have reduced the hose length, etc.

It then hit me that these parts came out at some point and I don’t remember why but I took them out. But I can’t find any documentation or set up videos that address these parts and where they go! Please help. I’m really tearing my hair out! 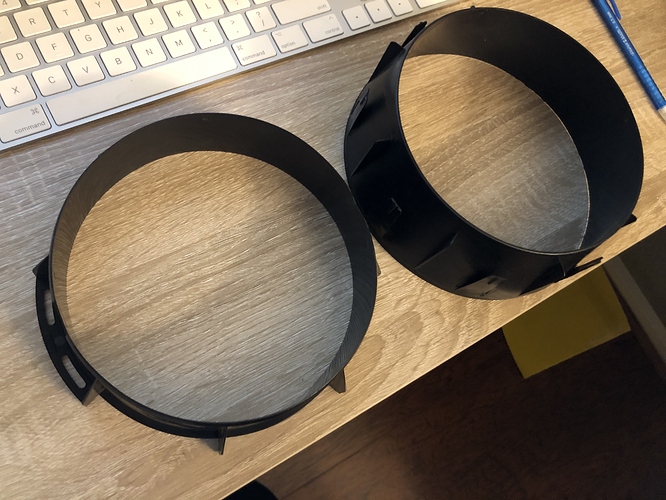 Yeah that tripped me up too.

Thank you…however, it mentions wind circle singular. I have two of them. Which one is in the picture on that page? I’m so confused.

Yes! I’m so sorry, I did see this page searching earlier and forgot about that. I can’t tell the difference with those pictures though. They make them look like the same size/shape. My two circles don’t seem to nest in themselves or even fit side by side very well. 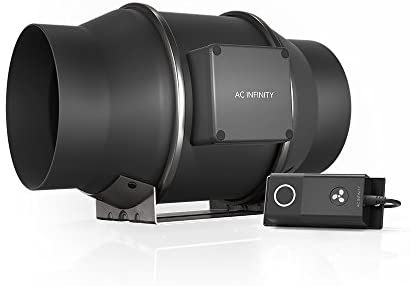 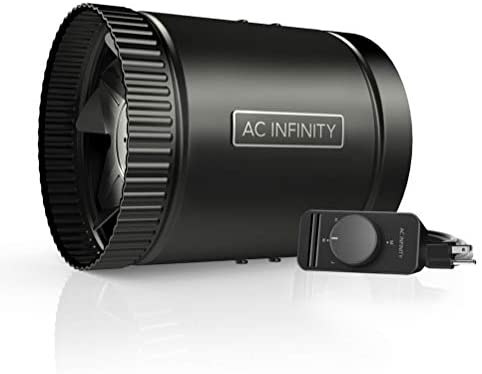 I guess my main question is how is a booster duct fan different from an inline duct fan?

The cheap one is an axial fan with a simple stamped metal blade impeller. They are cheap to make but have lower airflow and produce more noise. They are commonly used in HVAC to help boost airflow slightly to further reaches of a system such as rooms that are not as effectively heated or cooled as other parts of the home. The fans in the Glowforge are simple axial fans.

The other is a variant of a radial fan, sometimes called a “diagonal” fan, which are quieter and more efficient, and more expensive to produce, but in this case producing significantly more airflow at lower noise than the axial booster fan. They produce more pressure, which helps drive ventilation over long duct runs.

I use the Vivosun 6" version, much cheaper, same specs. 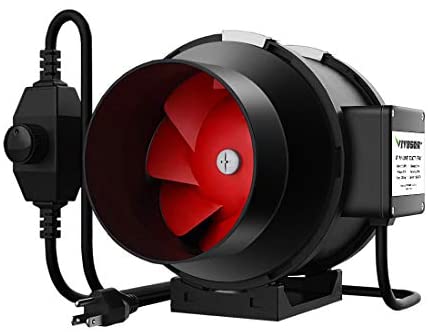 I’m still stuck. I figured out how to put the wind circles back in. I got a 3D printed extender for my rear exhaust. I bought an adjustable window vent that fits my window snuggly and I put weather stripping (?) along the top to try to get a good seal. Every single joint is taped strongly with foil tape. I have cut my tubing down to minimize turns (though it has to turn a bit to make it to the vent.) I’ve cleaned my entire machine as thorough as I can, including the air assist fan. I’m still having a pretty strong smell! I’m running out of ideas. I am a new renter (owned my previous house and had the compact filter and didn’t notice this much smell regardless) and I’m terrified I’m going to get kicked out if the smell continues this badly. (My machine is in a somewhat small bedroom of a house, not apartment.)

I’m willing to buy a good air filter or purifier. Anything. Even though I’ve already spent hundreds of dollars, I just need the smell as minimal as possible! Any further ideas?

Every single joint is taped strongly with foil tape.

Even the fan housing? Every seam and crack in the external fan unit needs to be sealed with silicone caulk or foil tape as well. Those things typically leak like sieves.

This is my set up right now. I had to grab the stool because I wasn’t ready to commit to mounting it on the wall yet. But how does it look? I didn’t do silicone on the joints, but I did buy some today and can untape to do that. (Would I be able to get it off later? Does that fan need to be cleaned ever?) 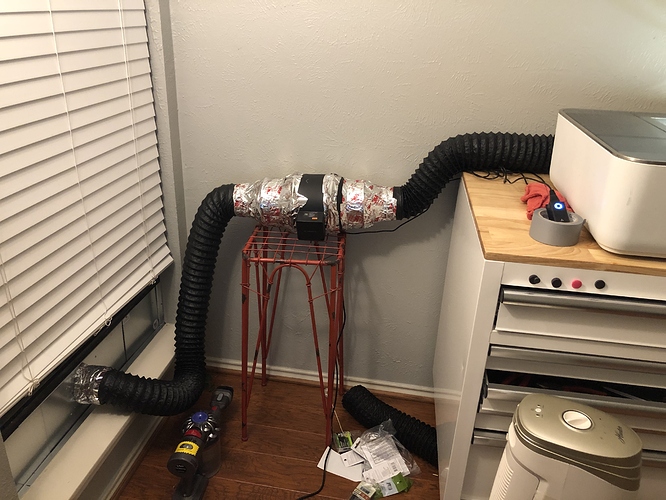 But how does it look?

It looks like you’ve probably got it all covered but if it was all sealed, you shouldn’t get any smells.

Are you sure the internal GF fan is clean (the one in the back on the inside of the grill where you attach the hose)?

With mine, I put my fan in just before it goes out the window so it’s pulling almost all the way & not pushing more than 6 or 8 iinches.

Is the adapter setup in the window sealed too? If it’s one of those that can expand or contract to fit different widths, you’ve got seams that would leak too.

Also if that’s a double-hung window, you want to make sure that where the lower unit now meets the upper unit is sealed. Any foam you use for that needs to be airproof - try breathing through it to see if air under pressure will come through. A good way to temporarily seal it is with some wide (4") blue painters tape. If you tape up the window and it’s fixed then you can easily pull off the tape and seal it properly with foam weather stripping.

I’d start at the GF and sniff all along the path. Every time you smell something, figure out how to tape or caulk it to seal it and move further along. You should be able to find every leak.

Also, you can use a candle to see where the air is coming out of your exhaust setup. When the flame wavers you’ve found a leak in the hose or fan.

BTW, is that hose supposed to be airtight? Some of those aren’t designed for complete airtightness and leak through the hose wall itself.

Great questions and I appreciate the help!

I cleaned the internal fan as best I could. It’s hard to reach. lol

I need the window set up to be temporary so do you have any ideas on how to seal up the edges and window panes that would be easy to remove each night? Would I just stuff something in the gaps?

I smelled around and I did smell some around the inline fan itself. I’m betting it’s the joints and the silicone will help!

The hose was recommended by all the FB groups I’m in. I assumed it would be okay.

I need the window set up to be temporary so do you have any ideas on how to seal up the edges and window panes that would be easy to remove each night? Would I just stuff something in the gaps?

Try foam window sealing - you can find it in Home Depot or Lowes. It’s made by Frost King, comes in rolls in a variety of widths & thicknesses. Pretty inexpensive. You can cut it with scissors so it’s easy to fit into the gaps.

I’d size the bottom unit so it fits snugly (with some of that foam sealing around the edges) and then seal up the seams in it so it doesn’t leak. Then a piece that goes in the gap between the upper & lower sash units.

Or, I’d make a piece that fits between the bottom of the upper sash unit and the windowsill - using either MDF or plexi/acrylic sheeting. I’d put a 4" dryer vent and seal that up. And I’d leave it in - just pull the hose and drop the window. No need to mess with the gap between the sash units. You’re only attaching/detaching the hose every day. It depends on whether you’re okay with having a sheet of material there all the time.

I really can’t leave the entire thing in the window every day. It definitely has to come out each time the machine isn’t in use. (I usually get all my work done at night after my regular job hours.) I will look for the foam sealing to help in the possible gaps!

I can’t believe how many people I’ve heard just “throw the hose out a window” and have no issues…they made this sound so easy!!! lol

I really can’t leave the entire thing in the window every day. It definitely has to come out each time the machine isn’t in use.

That’s why a panel that goes below the upper sash and stays in would work. The only part that stays in the window would be the part with a 4" hole in it. If you make it out of acrylic then no one would know it’s there unless they looked closely. But you lose the ability to open the lower window sash for fresh air as there’s a plexi/acrylic panel that’s sealing up the outside.

I did that for awhile when I had mine on the main floor. We have casement windows so I just made a panel that went on the inside of the window frame with the hole cut in it. That stayed in all the time. I opened or closed the window using the normal crank. Same concept for a double-hung window except the panel needs to go under the upper sash (but on the outside of the lower sash) because you need to be able to raise the bottom sash so you can attach the hose to the hole in the panel.

Even the fan housing? Every seam and crack in the external fan unit needs to be sealed with silicone caulk or foil tape as well. Those things typically leak like sieves

This! If thought I’d taped up pretty well but started getting crazy amounts of smoke. The foil tape was starting to straighten out where the fan housing had compund curves (most of it). Taking all that off and putting down a double layer of thin packing (clear 2") EVERYWHERE finally did the trick. Make sure you check for seams on all sides, including the bottom and where curved parts meet flat parts. In retrospect, spraying the whole fan with Plastidip would have been easier.

I guess I’m having a hard time picturing what you mean! But I definitely don’t want anything permanent in the window, even an acrylic panel. I don’t think I’d be able to lock it without jamming something in the top part? I’m too paranoid. But I might be misunderstanding the scenario you’re describing too.

I don’t think I’d be able to lock it without jamming something in the top part?

The acrylic would go on the outside of the lower sash. The lock would not be affected. Something like this: 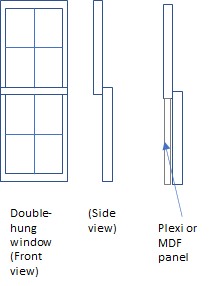 The acrylic would go on the outside of the lower sash. The lock would not be affected. Something like this:

OH!!! That is AMAZING! Thank you for the visual!!! I definitely wasn’t understanding but that makes sense! I already spent quite a bit of money on my adjustable vent options but I will keep this in mind!!!

But I worked on putting the silicone on the fan, and I taped up the adjustable vent joints while it’s in my window…the smell is definitely better today. I’m kind of scared to try acrylic though…

So I’ve tried a few more things (had a friend take a look and thought we solved it even)…but it’s just not helping. I have not had a chance to think about making a whole panel for the lower sash. It’s been a little crazy and I’ve just been coping the best I can. I’ve checked the joints (added silicone and put the tape on over it) and did the flashlight in the dark test, etc. I have cleaned everything. I just have a hard time understanding why I have so much smell when others have described the (nearly) exact situation with no extra special accommodations added and are fine.

I have emailed support but I guess they can’t really recommend much since I’m using an added inline fan, etc.

At this point, is there a reasonably-priced air purifier that would help? I have a (kind of cheap) Hunter brand in the room right now but I discovered it is discontinued and the filters are hard to find…and honestly, I suspect it’s just not that strong.