I’m having some trouble creating something in Inkscape.
I found a photo of a classic Barbie. I used the bezier tool to trace around it, using different layers. I want to cut out the profile of this and use it as a cake topper for my daughter’s 6th birthday party tomorrow (Yeah, nothing like last minute, huh?).

Well, when I was adding the little part that said “Happy Birthday,” I select the objects and then hit Path > Union to get rid of the parts inside, this weird line appears in the middle of my object, and I can’t figure out why. I’ve ready a bunch of the articles and watched videos in the matrix, but still can’t figure it out.

I’ve uploaded the Plain svg file so if anyone is able to help, that would be great!

I didn’t do anything with the text, just fixed the figure. (Open path and interior cuts not correctly subtracted out as a result.)

Jules beat me to it as usual, lol.
Anyway, I kept your image the same and made it cut, score, engrave.
Remove the guide text before printing
.BirthdaySign.zip (11.3 KB)

But…i combined the legs with the shape and that might not have been what he wanted, so yours might be the right way to do it.

Anyway, I’m off to catch a nap.

Awesome! Thanks for doing that. I could not figure out how to fix the figure. What did I do wrong with the bezier? Was I too sloppy and the lines were not meeting up?

Anyway, I kept your image the same and made it cut, score, engrave.

You rock!
Thanks for the help!

I’m just trying to understand more of what I did wrong also, so I can continue to get better in the future.

Awesome! Thanks for doing that. I could not figure out how to fix the figure. What did I do wrong with the bezier? Was I too sloppy and the lines were not meeting up?

Did you hand trace that? (Pretty great job on it.) Yeah, the starting and stopping end points on the midsection didn’t close. (Very close but not exact.)

Yes, hand traced. I have never done that before, but gave it a try. It was pretty ambitious.

And then I just needed to tell each object to turn into a path. That’s what else I did wrong, yes?

No, the only problem was the open path. Once that was closed it created a Filled shape that could be merged with the other filled shapes.

I assumed you wanted them joined together, since the head, torso and legs were separate traces. Merging them made the cut line go around the outside of the shape for cutting. Otherwise it would have cut off the head and legs separately.

The easy way to remember it is - Fills can be merged or subtracted, and then they create a joined outline automatically. The outline around the shape is the cutting line. If you then remove the fill color, just the cutting lines remain, and the interface has no trouble interpreting it.

In most drawing software, you can’t merge just outlines. The software doesn’t know what you want to do with it. So give it a fill color, merge it or subtract it or whatever you want, then take the fill color out.

Not sure how to do a lot of things I do in Inkscape, but I keep it around to check things and also a few nice perks, (which I shift over to Corel when accomplished).
BUT…
I treated the doll as one item, and fixed some paths.
Then I took the ‘KNIFE’ tool to where legs met dress (made the little segment green for a score and tidied up the orange segments.
Also used KNIFE where sign and dress merge. Tidied up outer cut lines and again made inner elements green to show a different thing than the cut (orange).
Left it up to you as to dress or sign in front. Could just eliminate the green segment there that is not wanted.

Probably lots of ways to do things, but I have found out a long time ago that Node Control is your friend.
This is called ‘Shape Tool’ in Corel. If using it and zoom in a little where the paths merge, you can usually see if there are double lines or open paths.

Not really sure Inkscape has a Knife (slice) function. Someone else can chime in here if they know, and state what the function is called, since I do not remember ever using in in Inkscape (too lazy to go digging at the moment, sorry).

Anyway, hope this steered you towards a better understanding.
Say happy 6th birthday for me.
(Way too verbose as usual, meh).
Happy Trails…

@jules when you are troubleshooting designs are you saying you try to fill them and depending on how that works you determine if the paths were closed properly? If not, you close them and try again. Once the fill completely fills the design you then remove the fill and leave the outline stroke for cutting?

I’m just looking for your thought process on how you debug them and find the paths are not complete etc!

That’s exactly right. Sometimes it’s easier to see the problem when you drop a fill color into it. And sometimes you have to just suspect what the problem is (the line that Bruce said appeared across his drawing) and then zoom way the heck in and see if you can find it.

The more of them that you see, the easier it is to spot them, and I’ve got years of practice from finding them in my own files.

Thanks for all of your verbosity! That really helps me to learn.
I don’t know if Inkscape has a knife tool either, but I’ll definitely be looking into it.

I ended up leaving off the sign altogether, so that the cake topper could be used as a toy after. I thought it would work better this way, without the Happy Birthday callout on the side.

Here’s how it turned out: 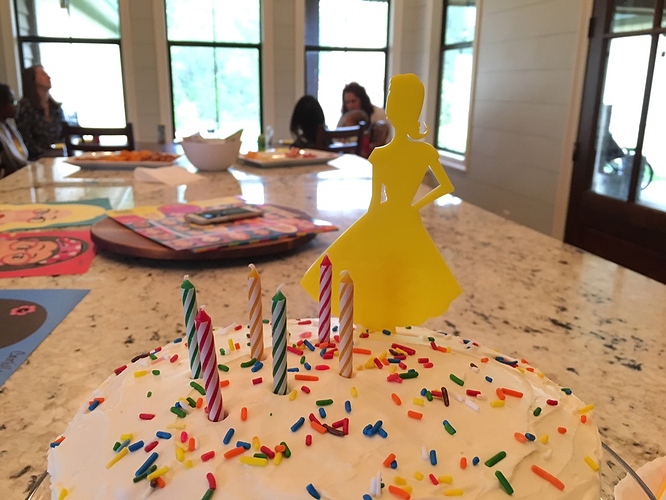