I made this yesterday and love the way they came out. Just need to add a sawtooth hanger to the back. 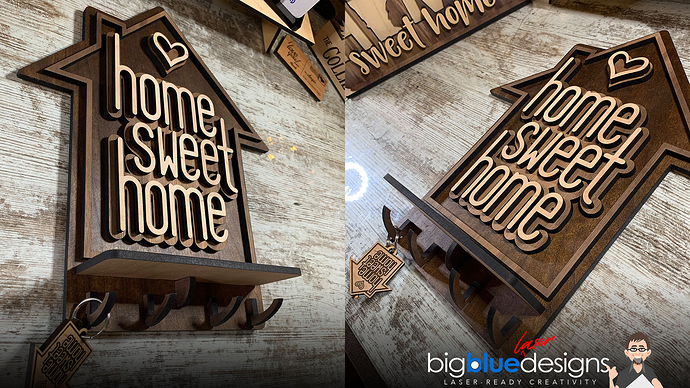 One more layer and you’d have the depth to make a keyhole hanger integrated into the design, it’d sit completely flush.

I’ve considered that. But I’m trying to keep the overall material usage down.

I could be more explicit, like how I like your typeface choice and overall design sense, use of layers and “whitespace” in this. I can tell that you worked on it some because of the way that the typeface “stroke” is almost identical to the layer “border”, which is a pleasing bit of proportion and obviously intentional. Likewise your house outline appears to be the same thickness and that’s a nice design language that you’ve built here. One notable exception is the variable width heart, but again that is such an obvious exception that I believe it’s intentional, going for a “hand-drawn” calligraphic look. I suspect you purchased or otherwise downloaded that heart, that’s a really common look these days, which makes sense because it’s a successful design.

I just don’t often offer specific design feedback because I think it tends to come off like people telling you that your design was somehow lacking and generally find it kind of rude. But here we are, so…

I almost didn’t say anything about the keyholes, because… well, rude… but I get the impression that this is a potentially saleable item judging by your watermark, and if it were me, anything that is secondary manual labor like adding a hanger is to be avoided.

I could question your shelf design for not being supported on each end as well but I doubt you’ll be putting anything too heavy on the edges that could torque it. If I were trying to make it bomb proof (so customers don’t whine later) I would probably have reinforced that a bit more, but who knows maybe you prototyped this and tested how strong it is and ergo you can ignore me. (You can ignore me anyway!)

Anyway I’m not your target market, I don’t go for home goods like this anyway, so I shoulda just stayed out of it, what do I know?

It’s really nice. This is going to be a good seller!