House numbers, my first real project on the GF

My wife design/laid it out and off we went. Cherry ply with lacquer for the face, 2 layers of baltic birch for the backing, and black acrylic for the numbers inlaid to the front. I also made a nice keyhole on the back to hang it on a screw by cutting a rectangle out of the middle layer, and then an overlapping keyhole shape on the back layer. Worked really well and kept a router out of the mix. Overall really happy, other than a glitch with my AI file that the GF app didn’t like which caused the tip of the tail at the bottom to not engrave even though it appeared as it would in the preview. 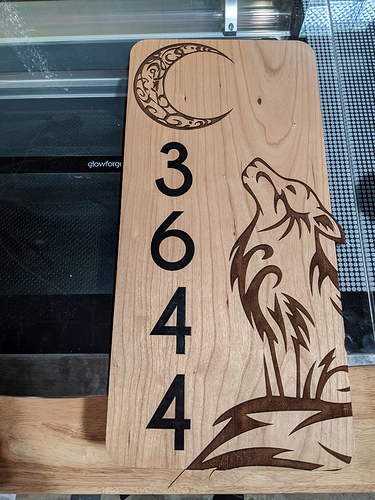 the tail at the bottom to not engrave

It may be an open vector that will only be horizontal in the GFUI but not in the software. Close the vector and it should work if that happens another time (might be a bit late now)

Thanks, I suspect you are right. Illustrator is new to me, and I was fighting with cropping the parts of the wolf that were outside the border, and then including the ear and the tail. I obviously did something different between the two, and probably missed connecting the paths on the tail.

Welcome. This sign will certainly dress up the neighborhood. Nicely done.

Which hopefully is not amid one of the HOA’s from hell.
I have been stunned by some of the items a few friends who live in restrictive HOA have banged into.
I know they cannot all be crazy train, but after completely reading one rules list (which it seems is another form of fine print everyone ignores until they cannot) it came across as a control freak manifesto and I gave condolences to my friend. I was also told that select people make it their daily job to sweep the neighborhood, looking for transgressions. (Bored housewife’s or a bounty. Who knows?).

Anyway. Pointing the wife to your exhibit @autocrosser . She has been making noises that convince me she is not a fan of our house numbers anymore.
As long as the cuteness overload is contained to a point it is not embarrasing, whatever she wants will be fine.

Yes, the ear gives it more dimension, and I like that you added acrylic.