I am trying to remove an area so that I can insert a piece of leather into the recess.

I noticed that 3d engraving a pattern removes the darkest (blackest) area to about 1mm which is perfect, however when I upload the shape as a complete black .svg file, the option to 3d engrave is no longer available.

You don’t necessarily need to use 3D Engrave. A regular engrave with grayscale set to “Vary Power” will have the same effect.

You uploaded a vector shape most likely, 3d engraving and vary power are disabled for vector shapes.

You can tweak your engrave settings manually to get the exact depth of engrave you like.

I can’t offer much guidance on settings, because how hard and fast you hit that piece will depend entirely on the material in question – e.g. Basswood takes almost nothing, rosewood is really hard to engrave.

One thing you might want to consider is running a score around the edge at the end to ablate some of the residue that will form in the corners… but that might not be needed. Experimentation is the best bet here.

Also, 3D engrave is only available as an option for certain materials.

Depth engrave is only available in pixel images as they will have the range of shading needed. You can engrave vector shapes but only to a single depth. You can assign both color and outline to different colors and then set that outline to an engrave on the first pass and change it to cut out on the second putting you leather at the location of the engrave.

Guys/girls… I just wanted to say a quick thank you…

@wbgraphic Vary Power is also not available when you upload a solid image i.e. no pattern… but I will try a regular engrave the next time rather than a 3d thank

@evansd2 I will try uploading a non vector file… I’ve only been uploading .svg files so far and have to say I have had the option to 3D engrave on proofgrade medium draftboard as supplied with the glowforge… but I totally get there is a difference so will try it with a .png thank you both

@rpegg thank you for the heads up

thank you all I will let you know how I go

Guys… I uploaded a .png file and did 2 tests… a 3D engrave and a Vary Power… both were perfect and basically identical… thank you all very much

My only question now is controlling the depth? (which can only be done in pixel images like .png

Do I change the focus height?

It’s cutting a little deep and is currently set at 3.17mm… do I increase this to 4mm? (the draftboard is only 3mm)

Depth will be determined by the combination of speed and power that you choose. I generally start by slowing it down a little, to go deeper.

Nope - you slow it down a little bit or increase the LPI.
(Wait…I need to let @geek2nurse answer here, she’s bored.)

I’m drugged, so my answers should probably be taken with a grain of salt for the next few days.

I generally start by slowing it down a little, to go deeper.

Your medications are showing girl

What’s my excuse?..I thought he wanted to go deeper too!

(Sorry @duncan - to not cut as deeply you speed it up some or reduce the LPI.)

Reducing power may be better to avoid the striations that can occur a low LPI levels. I usually fuss with power first (I try to run everything as fast as possible) and then speed and only then LPI - but that’s because I rarely do more than 270 LPI so reductions there quickly run into the striation issue.

But if it’s starting at 340 or something I totally agree (& it will go faster too!).

I have curly hair AND dopey meds. I’m doomed.

which can only be done in pixel images like .png

I find it best to load the PNG image into Inkscape, which can the make outlines that are vectors that match the image.

The output is an SVG but it will contain the pixel data in the image as well as the vectors around it. When it is loaded into the GFUI you will have a layer for the pixel image and a layer with the vector data.

When you use “vary power” the black will get your highest amount and everything else will get less by how much lighter it is, and white will get the lowest amount you say ( default is zero)

If you have a vector file set to engrave it will go with the power speed and lpi you set so is like vary power if it was all black.

Thank yo all for your advice… I did want to go deeper… also wanted to know just how to control it all… I’ve not got on to experimenting with LPI (Lines Per Inch?) but have got the final job done thank you all to your help.

It was mainly for the iPhone Amplifier in this pic in order to create a recess for the leather top to sit into. Also used it to create the polka dot pattern on the Bitcoin Boom sign behind.

These are my first creations: 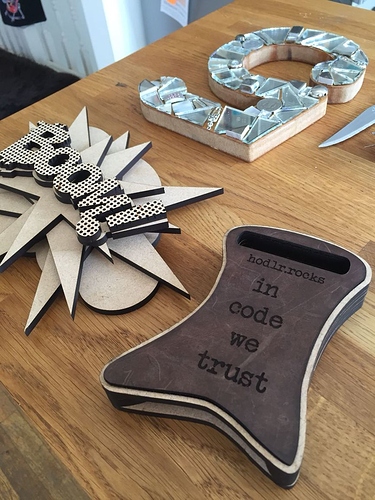 You did an amazing job on all of these. Great collaboration!

Oh yeah, very cool mosaic you got going in the back there.

Nice stuff! I love the “boom.”