How long is long? What is your longest engrave?

I have been doing a lot of 2-3 inch diameter variable engrave “Tests” at 2500 speed full power and 1355 LPI and a customer wants one 10 inches in diameter. After several tries spending a long time thinking about it, the GFUI kept coming back with “you’re kidding! right?”.

So first I dropped off everything but the engrave trying to ease the job, and it still laughed at me, so I dropped the LPI in half and it still refused but I refused to take no for an answer and just tried over and over.

Eventually, it decided to submit and gave a time of 51/2 hours.

Now looking at it I see it will need two passes

What is everyone else’s longest single-pass time? 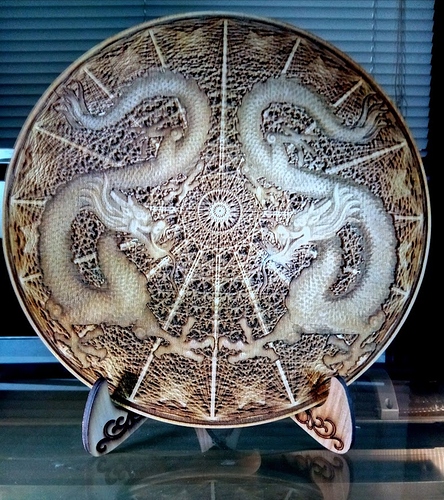 Ended up about 10 hours of Glowforge time, was two passes.

My longest was in the 3 hour range - but I’ve never seen a reason to do that many LPI - the wood grain would get in the way LONG before that. I get beautiful results at 270 LPI for wood, and have gone as high as 450 in acrylic

mine was 3.5 hours. a present for my parent’s wedding anniversary. I think I posted a picture of it someplace on here.

My longest engraves were around the 5-6hr mark, that was for a pretty full bed tho, speed at 1000, 450lpi fill power. Back when I was making christmas ornaments

Just under three hours, but I spent at least twice that cleaning up the image.

That is a long engrave, but turned out beautiful!

I would love to know the usage stats on your machine, @rbtdanforth. It’s a workhorse.

I spent at least twice that cleaning up the image.

There was quite a lot of work before and after, but not enough before, I could have put more contrast in the dragons but careful work after enhanced what was there.

My image was a scan of a seventeenth century map. The yellowed paper may look good on a display, but not to a laser cutter. GIMP could only do so much. The rest was pixel by pixel.

my very first engraving was 7 hours, a copy of my family’s c.o.a. I used the mdf sheet that came with my GF, Should have started much smaller, as it was all I could do to stop from drifting over to the GF to stare at it in anticipation!

it was all I could do to stop from drifting over to the GF to stare at it in anticipation!

Welcome to the group!

You should drift over and watch it frequently. Even in engraves on wood I know well, and expect no problems there can be many types of surprises, especially if you have not done that job many times. There have been many sad stories of fire disasters that they were not paying attention when a fire started and destroyed their Glowforge if not a lot more.

I’m not far from it when it’s up and running, for sure! I meant that I was probably a bit neglectful of the other things I should have been doing!