How to Add something you Forgot into an Open File. 🤔

but sometimes you just want to find out whether the adhesive on the PG veneer is permanent or not, you know?

yep… as to the PG veneer, I’m not sure which 3M adhesive it uses. I’ve only used it for indoor applications so far… it’s certainly not a “repositionable” adhesive!

Yeah, the only references to it I’ve been able to find have been that it’s 3M, but nothing more specific than that. People who have skinned their laptops seem happy with it, so it seems pretty sturdy. I’m thinking about wrapping my Apple Pencil but want to know what I’m working with first…clearly some experiments are in order!

Looks like it will outlast your device, so have at it. (I did an inlay on a leather iphone case and it is still quite stuck on there.)

apple pencil would look great in “wood”, but that is a pretty tight circumference around which to wrap the veneer. I’m not saying it can’t be done, but you may end up cracking the veneer in the process. Either way, I’d love to see your results if you try it!

I think it’s the potential permanence that is making me hesitate – I need the “excellently sticky but also not too bad to take off if you change your mind” 3M adhesive.

It hadn’t even occurred to me until I saw the Toast version: 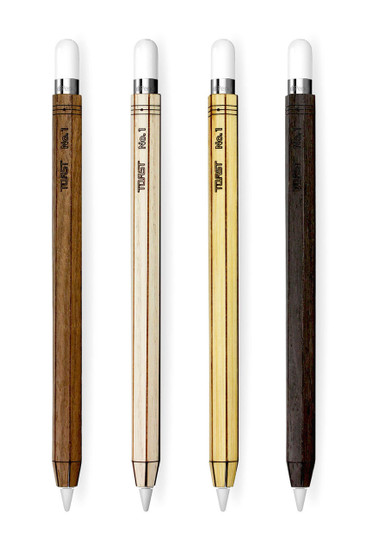 I love how they didn’t try to totally wrap the curve but went for the old-school pencil look instead.

the score lines there solve the issue of the tight circumference, and a hex-shaped thing is less likely to roll away from you on a table than a cylinder shaped thing.

Nice tip! I was excited when I found that you could cut and paste additional copies of objects in your cut file within the GFUI. Very handy when I made only 3 legs for a 4 legged stool. Instead of having to go back to illustrator and make the change and add another leg and save and reimport it, I can just choose one of the legs and copy/paste and just shift it to where it fits.

I was thinking about this last night @Jules, when after drawing a “love note” to his girlfriend, my son said to me for the third time. “Dad, the “R” didn’t print quite right, could you make the left side thicker?” This started last week when he saw how the GF could engrave a drawing like his coaster. So, Sunday (last) he started a block letter note of encouragement for his girl. Last night he started again and again. He didn’t hear me on the second time of saying I wanted it in marker, but he did hear me when I said, just draw out each letter and we’ll move them around in Illustrator. That was my first hurdle. Scan all letters, photoshop out the white space inside and out of each letter, cut/paste one by one into Illustrator, resize and reorganize to make words. Get his approval… “Dad, they’re kind of light.” Yes, son remember my two requests to do in marker? So, Live traced them, expand, ungroup, ungroup, ungroup, erase all the new white spaces. Save as svg, upload, etc. - 18 minutes, not bad. "Dad, the “R” is missing lines on the left, and the “I” is missing… well you get the idea. Did two more prints and they aligned PERFECTLY!

No time to do any of my stuff, but time spent with my son, FINALLY something we can do together that we both enjoy. His car and his girlfriend, and now being a junior fire fighter are his main priorities. Thankfully the GF came along.

Great! I’m glad it’s coming in useful - I haven’t had much opportunity to use it yet, but it is kind of fun to play with…nudge, nudge, tweak, boom! I’m almost tempted to leave a few things out deliberately.

I’m almost tempted to leave a few things out deliberately.

Maybe you could add a little corvette silhouette to things. Sort of where’s waldo.

His car and his girlfriend, and now being a junior fire fighter are his main priorities