How to Add something you Forgot into an Open File. 🤔

I feel like an idiot for taking this long to discover this little trick, but better late than never I guess…

You don’t align additions to the existing cut, you align them to the PREVIEW! And they come out perfectly!

I forgot to add the hash scores to a ring that I was cutting out of a scrap in the far reaches of the bed, and I’d already cut out the blinking ring before I realized it.

I just created another quick file that included both the ring and the correctly placed hash marks to be scored, and dragged that onto the still open file… 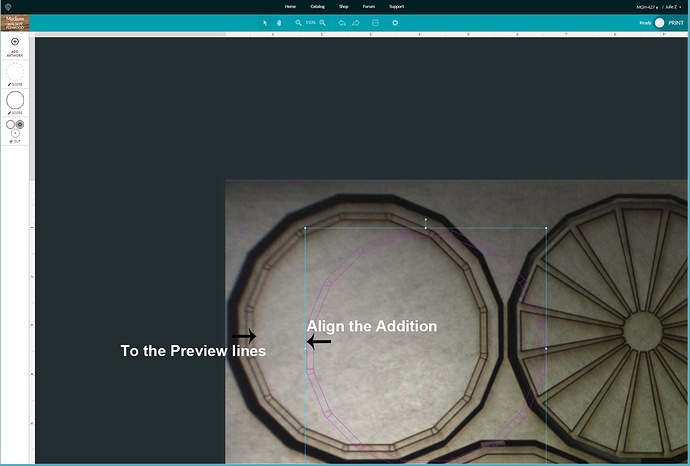 Placed the new ring so that it covered the old Preview ring precisely, (even though it appeared to be offset from the actual cut underneath), then Ignored the rings and ran the Score. It laid the hash marks exactly where they were supposed to be on the cut. 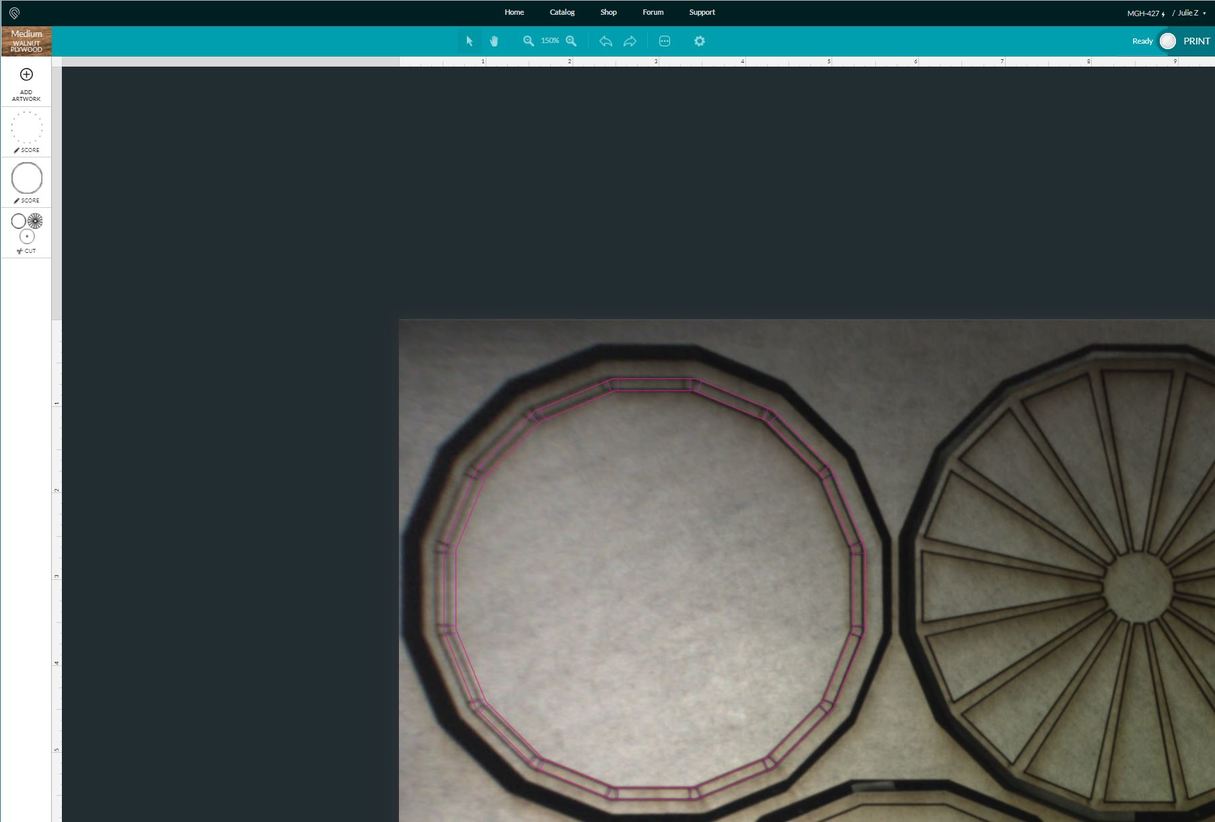 Somebody whack me upside the head for taking this long to figure this out!

30 Likes
How to Prepare an Etsy File to Print?
Trace and alignment WAY off
What a bummer! ARRGH!
Alignment Expectations
Calibration/cutting is off
markevans36301 January 26, 2018, 2:04am #2

You have set the bar so high that this great writeup doesn’t even surprise me. This will help a lot of people.

Thank you from a beginner.

It’s a simple thing, but Soooooo easily missed! Thanks for sharing!!

Wait, @jules didn’t know something? Stop the presses! This is the biggest news story of the week!

Much there is I know not, Obi Wan!

It’s so funny about how things like this just come to us now and again. We’re all isolated from each other, learning the same stuff from different angles. I’m sure fur every person who is like “wow, great thinking!” There’s probably another who is thinking “how else would you do it?!” …And yet another who is like “wut?, just wondering how this would even come up.

I love those “Aaaha” moments.

Oddly, I thought about something similar last night, awake at 1am as the expectant father the day before a delivery date. I bought some leather round coaster blanks, and figured I could put those in the preview and then drag artwork over, rather than trying to align in a vacuum. @jules you at least are able to have tried out the theory. My GF is still on a UPS truck someplace. (within 30 minute drive…) I have a dinner party to go to tonight. Maybe I can put artwork together and get the coasters made by then? Slightly unreasonable deadline.

This has me wondering what other little tricks I use all the time and take for granted, which might be revolutionary to others who hadn’t seen them/figured them out.

Also, this trick is one of the major reason I would like to be able to see resize dimensions in the GFUI. If you have, for example, resized your design a little bit to better fit some material, resizing the second version (with the forgotten elements included) to the exact size can be quite tedious.

Geez, (smacks forehead) it never occurred to me that the displaced after-image could be used because it’s - displaced! Yet I knew if you ran the file again without moving anything it would register perfectly despite the offset.
I just never put 2 & 2 together

All of a sudden that camera after image has more value than I realized.

Just depends on how often it comes up i guess…I don’t leave things out of designs very often, so it hadn’t really clicked till now.

I try, when it occurs to me… but that’s the thing… They aren’t tricks until someone comes along and goes, "Oh, neat trick!"
Until that happens, it’s just the ‘obvious’ way for me to do stuff, that presumably everyone else does as well.

Chuckle! Well everything laser is new to me, so I go by the default assumption that it’s new to a lot of other people too.

I used to has a high IQ,
but it sobered up after college.

There’s probably another who is thinking “how else would you do it?!” …

I never know that what I might know is something that everyone doesn’t know. I’m not sure how to get those tips out except through posts where it just happens to come out. There was a ton of stuff we learned pretty early on with the PRUs and then over the summer as the software was enhanced. A lot of that was reported here but it’s not easy to find in a nice capsule format. Not sure how to get it in a format that everyone could use to find out how to do stuff. It’s too bad because there’s a lot of good stuff.

Yep… yesterday I was thinking about how much great info I got out the forum before my GF arrived… and how I would never have the time/energy/motivation to go back and sift through all of that if I hadn’t been following the forum (voraciously) and reading the stuff as it was posted. The Matrix is incredible, but it’s a bit overwhelming… and that’s coming from someone who watched it come together, read most of the posts as they were posted, contributed tutorials. Going to it from a blank slate is kinda like… if you had never seen a movie but wanted to, and then someone hands you the entire IMDB and says “just start here, some good stuff to be found”.

The Matrix is incredible, but it’s a bit overwhelming…

Hehe! Yeah… I ran into the same thing a few weeks ago making dominoes. I’d done the fronts, and then figured I’d create the backs while the front was engraving. Started engraving then I went “Duh. How am I going to line them up if they’re not in the same file?!” And, like you, I found it was stupid-simple to just add the artwork to what I just did, then line them up, ignore the front, and go.

Not to mention that the conversations here often veer off into super technical or theoretical debates about the very nature of laser cutting. Time spent reading through old threads is interesting and educational for sure, but sometimes you just want to find out whether the adhesive on the PG veneer is permanent or not, you know?