I have been doing a lot of experiments lately to come up with an interlocking shape to make a thin-walled round box that would show only side grain but be thick enough not to fall apart, but as thin as possible. with a tight kerf.

So I was very disappointed when the cut (1)was very smokey, the kerf very wide and it would not cut through. So as it was scrap anyway and the least expensive wood I had, I tossed that away lowered the speed and tried again. Again it (2) was if anything worse and running a second pass was messier on top and still did not cut through.

So I inspected the lenses and the window had a barely perceptible haze so I cleaned that and tried again with the same settings. Not only did it (3) cut through cleanly but with much less smoke, and where slowing the cut did not improve the result, now I think it could be a hair faster, 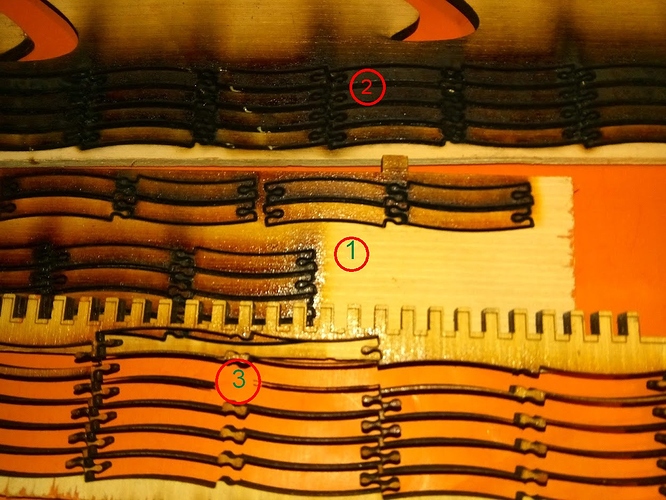 And the experiment worked! The pieces were cleaner and stronger than before and a fairly strong ring was created with parts tight enough. Strong pressure was needed to get them into place with no glue needed. 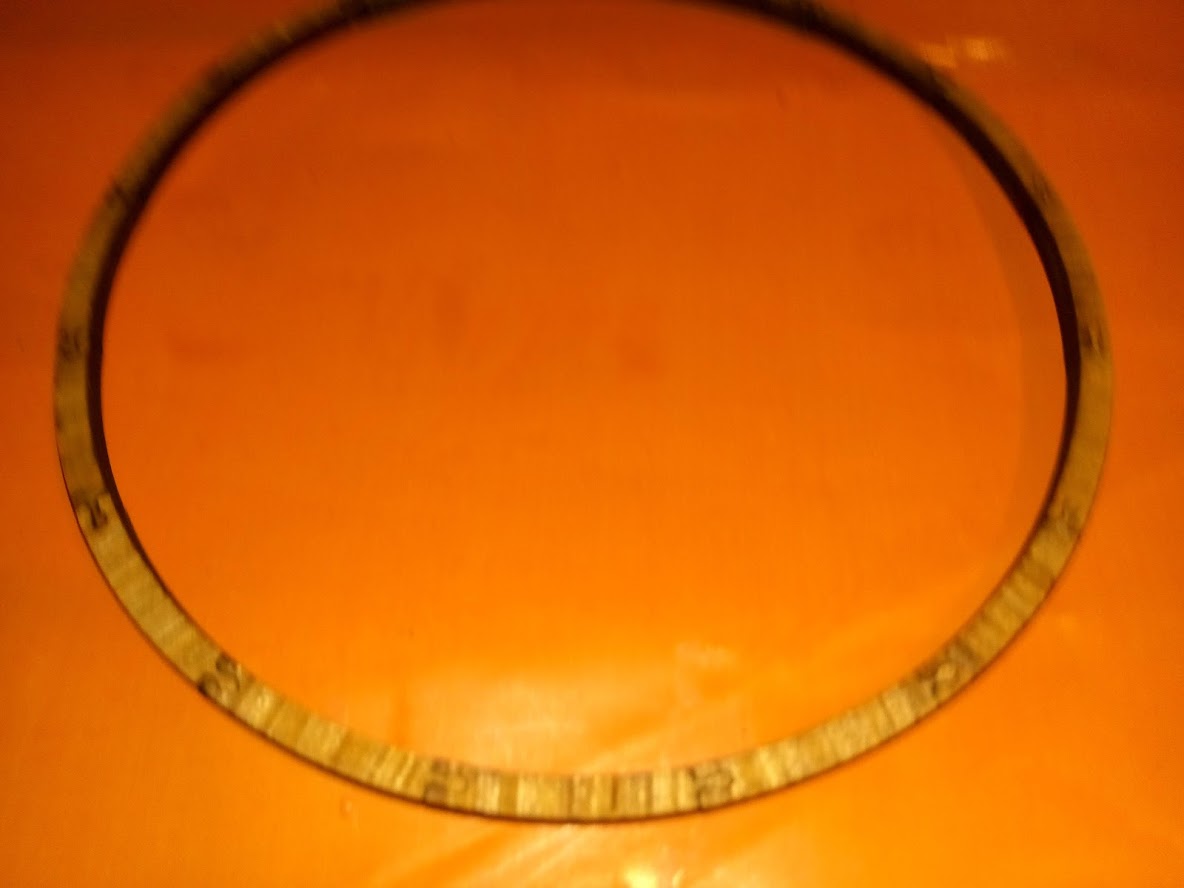 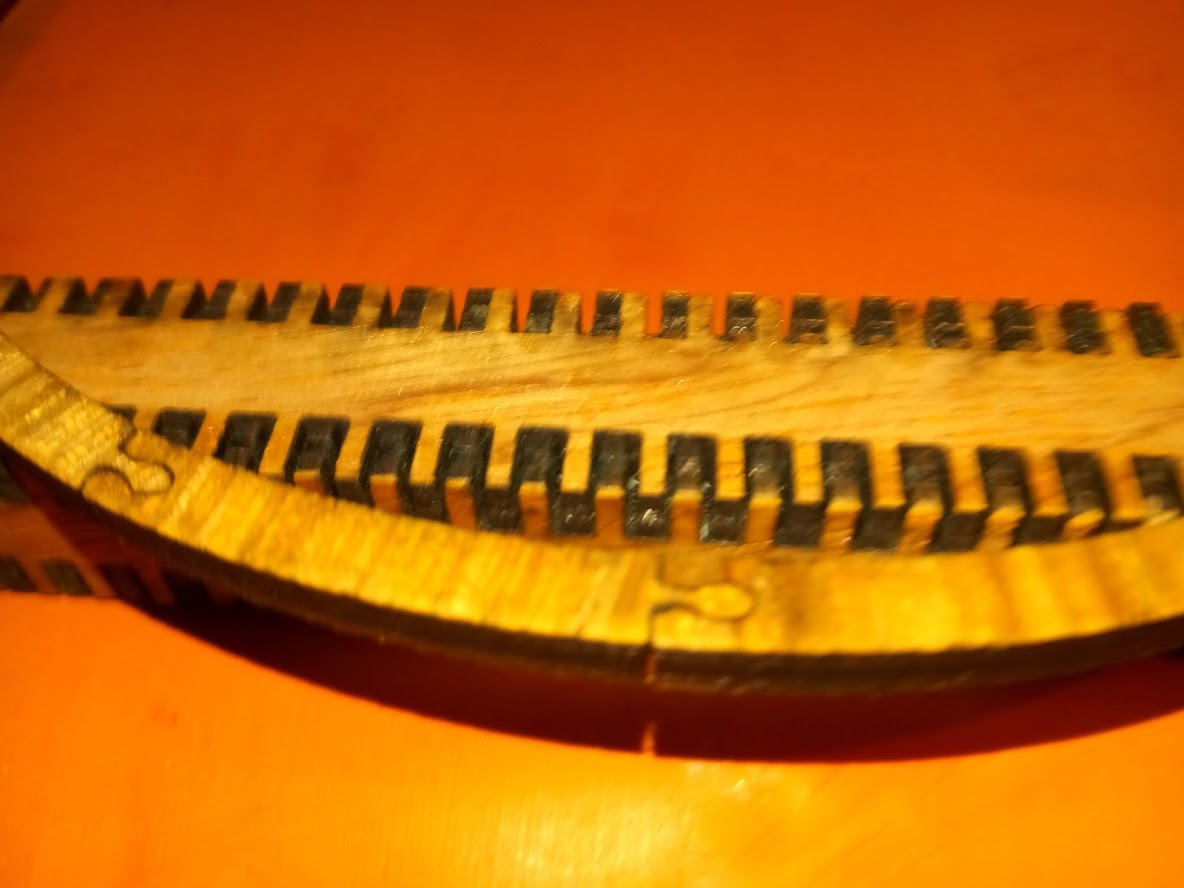 It really shows the effectiveness of cleaning to get optimum results. Thanks for the demo!

I am astounded by the difference after cleaning the lens. The proof is in the photos. I look forward to seeing the final result of your detailed experimentation.

I really like the way the grain radiates outward. That will make a fine frame for something!

the way the grain radiates outward.

I wish I could say it was all deeply thought out but it was pretty much driven by the shape of the scrap, though I too thought it was cool after

I wish I could say it was all deeply thought out

“I’d rather be lucky than good.”

“I’d rather be lucky than good

I need more good to align a number of them so it will sand clean and doing the inside is an extra challenge. Two rings glued together makes all a lot stronger, but there are challenges ahead before I can attempt the really fancy woods. 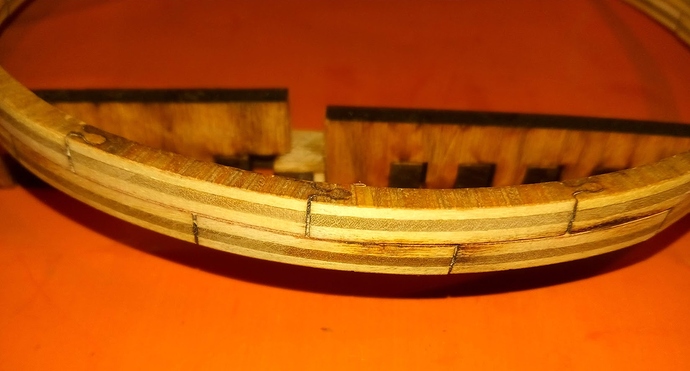 Is it tapered or the same diameter for the full height? If a constant diameter, I would suggest you take a look at putting a set of holes in each piece so that you can drive a small dowel through the hole to act as an alignment peg for each new layer. The top and bottom could be made without the holes, to “cap” the stack. The majority of the alignment effort would be taken care of by the pegs, and you’d only have to be really accurate for the top and bottom pieces.

putting a set of holes in each piece

I am concerned that the holes would introduce more weakness as unless I go with thin metal each hole will be half the thickness of the wall. I am thinking that as the materials are of different thicknesses that the overlap might do the locking so if “A” is thinner than “B” and one stack is ABABAB and the stack next to it BABABA then there will be “A” colored rectangles in a “B” background or a third material making it more complicated,

Alternatively if I have a cylinder the size of the ring I could build it around that. Sanding the inside of the ring was something I had not thought deeply about so that needs work too. Thin cork lining?

Well, you could make a jig easy enough. Laser a circle that’s the outside diameter of your layer and assemble/glue each layer on the jig to ensure each layer is equally round. If you have a nice flat piece, you could use cardboard. Once they’re glued, I wouldn’t expect them to be able to shift out of round. Then, you can stack them with another jig, maybe 3 dowels in an equilateral triangle on the inside diameter of the circle. And stack the layers vertically. Or a jig with two parallel horizontal rods that allow you to stack it horizontally.

3 dowels in an equilateral triangle

That most recent experiment has shown a need for 16 “U” shaped supports as the unglued circle is not strongly stable. This is not terrible as it allows adjustment but then again it needs that adjusting.