I know it would be a bit big 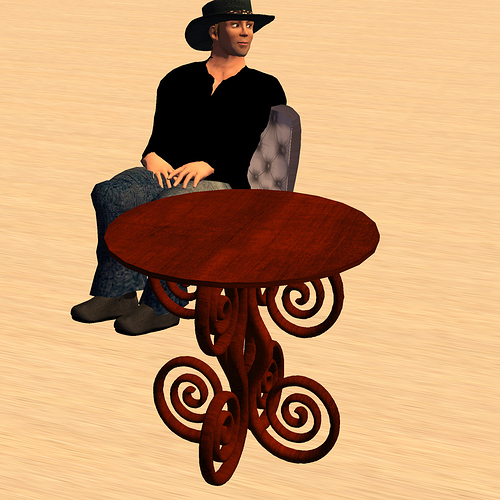 That is why I included the Avatar in the picture, Essentially a table big enough to sit at comfortably, to make the double spirals 28 inches tall and one piece you would need the pass-through capability, or make multiple layers where the break was as far apart as possible, the top could [robably be purchased as a pre-made shape at 30 inches, though multiple parts might be possible as well particularly if a design such as knotwork could be worked in

That is why I included the Avatar in the picture

Oh, I thought you wanted to forge a cowboy.

It wouldn’t be the exact design but you could split the base up into three pieces. The spirals and center section would be about 12” each and slot together with a two inch overlap.

Oh, I thought you wanted to forge a cowboy.

Yes, I keep expecting to see someone include cutouts of human figures as shown in the Architectural drawings, or even a coffee splatter become a part of the design. Though I could just forge a head

and slot together with a two inch overlap.

Yes, just how to do that in a way that is structurally strong has been the concern. I already have a stash of 1/8 in dia. bamboo skewers to use as pins though accurate hole drilling then becomes the issue. it is too bad there is not a nice 45 degree mirror that the Glowforge could drill holes {or cut slots} from the side

No reason you couldn’t add some traditional woodworking into the mix.

So here’s what I was talking about for jointing them together. 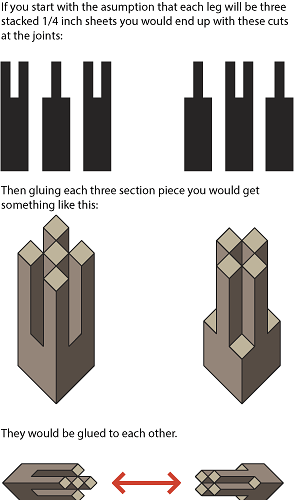 Dunno for sure but seems like it would be pretty strong.

Obviously it would give you a square profile. You would need to adjust your technique to get the end results you desired.

Inkscape would make it easy to break up the same outside piece into three different cut shapes and the glowforge can put holes all the way through the center piece but only part way in the other two, and a very thin wedge splitting the end of the bamboo pins would make a strong mechanical hold possible, A tight zigzag as is frequently seen can make one piece out of two but I would put those joints as far apart as possible and might even fill in the center of the spirals for strength there. It is the side to side cuts that will be the biggest problem as the Glowforge cannot do angles much less 90-degree angles to the plane of the work,

I had to give up most of my table saw and mills etc as even the Glowforge will be cramped in my current situation, and only hand tools will be available otherwise.

That’s why I proposed the above. It can all be done with the forge.

Though I could just forge a head

Saw what you did there !