I tried making toast with my laser

I tried to make toast in my laser it kinda worked. I did two tests the one on the left I did full power speed 500 the right one I sped it up to 700. It’s kinda hard to tell but I engraved a toaster on the toast. It did end up tasting weird though and it took about 20 mins to make so not the best way to make toast. I made a short video of the test here if your interested https://www.youtube.com/watch?v=idpky7qzHQs 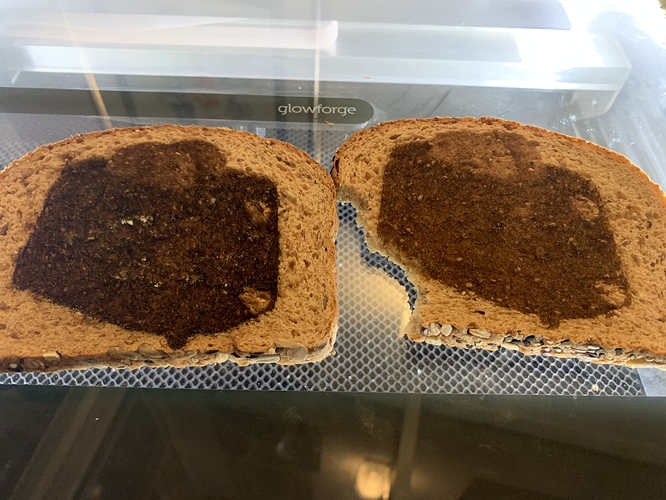 Fun, even if not terribly efficient!

Anyone can make toast in a toaster. But how many would ever think of making a toaster in toast! When engraving an image on such a surface I would think max speed defocused and even 75 LPI would do the job, and perhaps in a similar time frame.

Carbs don’t laser well. They burn and turn very bitter. The best material so far I have found are fatty things like Guac (which char but taste grilled rather than weird chemical taste).

The best material so far I have found are fatty things

Yeah, I tried toast a couple years ago. Only did a line drawing (my daughter drew a smiley face). The lasered part tasted like ash. But fun though!

Well your daughter did seem pretty fearless when I met her, so…

your daughter did seem pretty fearless when I met her

I imagine anyone who at 11 declares she’s going to be a cardiothoracic surgeon is going to a force of nature as a teen. My adult children roll their eyes when “dad’s putting crazy crap in the laser again…”

Although cardiology is still something she studies more than anything else, sometimes she wants to be a forensic pathologist. At 13 (14 next month) she reads all sorts of materials on cardiology though. I told her, and correct me if I’m wrong here, while she’s still in 8th grade and going forward, she should focus on all of the sciences if she wants to have the best chance of getting a medical degree some day. Meanwhile, and I’m not joking here, she falsifies her age and requests medical reading materials from universities and other publications. I think this medical thing might actually stick!

At that age wide knowledge is best. In the early '70s I was doing 3D printing and it would be my guess @henryhbk was not, but by the 2000s 3D printing was something else I could not imagine it to be in the early '70s. I suspect the universe that she will live in 30 years from now will be equally incomprehensible to us now. Detailed knowledge of that which will not change is a bank that never runs dry.

sometimes she wants to be a forensic pathologist.

She’s going the research route though - biochemist & neuroscience. I think this is a more informed decision than her previous one

Wow! Amazes me that people can absorb that much information. I could never. Not in a thousand years. Best I can do is “Oh! I had a similar thing happen a few years ago. I forget the solution but it had something to do with…” At least that ultimately gets me there, but people who go into medical sciences?! Those people have crazy brains!

Stuff tastes good when it browns because it’s caramelizing. When you hit it with the laser, it burns. So while you can put marks on your food with a laser, generally it ends up tasting like burned food.

Forensic pathology, how to turn $1m worth of education, into a, low paying job in one easy step. It is also not as cool as on ncis or csi in real life. But basically now do tons of science stuff, and if still interested when she gets to college, do a premed program (You don’t have to be a premed major, but you should be in the program, which is what my daughter did)

was doing 3D printing and it would be my guess @henryhbk was not, but by the 2000s 3D printing was something else I could not imagine it to be in the early '70s.

We did not have computers then of course so I was doing so by hand.