Recently got my GF, been using Epilog and Universal machines for year. Still coming up the GF learning curve. Many thanks to all out there for all the posts, very helpful. Lots of quirks like the power/speed remappings etc…

I can cut fine. Been playing with etching (yes on tiles!) and have an odd problem.

I have Photoshop and Corel Draw x8. I have been converting pieces to bitmap to get an entirely black image. I also got the artifacts on a .png import. The images are comprised of vector objects and an embedded image. For some reason the GF processing is adding a bunch of artifacts, dots/lines, for no reason I can determine. They get added completely to the upload, even outside of the boundaries of the bit map part. Interestingly, if I turn the dots intensity all the way down, the background artifacts stay 100% there, which is really odd.

I have tried both Save as and Export (that was quite a thread!!) for the svg file. Has anyone else seen this or have an idea? Perhaps some one can post the tool flow they use? No issues with entirely vector files. I’m impressed with the precision and repeat ability of vector cutting.

But the process of building the file and all the processing is pretty clunky compared to both of the other vendors tool flows. For the others you can set the material and color to operation mapping, then either direct print or save as a .pdf and it just goes. No doing the settings for every color on every material all the time. And I’ve never had them add artifacts.

Any thoughts out there?

Bob
Photo here, (I tried to upload svg file twice and it uploaded but doesn’t show in post, sorry) 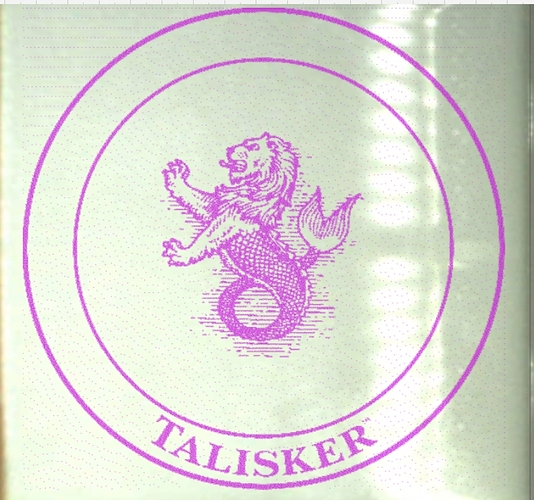 Yep…looks like your bitmap background is not pure white. A lot of folks like to remove the background in Photoshop and use PNG (transparent) backgrounds to remove bitmap noise. (Not caused by Glowforge by the way, it does exactly what it’s told to do, and it’s accurate enough to pick up something that is “almost white” and give you what you tell it you want.)

You can also adjust the image in Photoshop using a Levels adjustment layer to whiten the background. As light as that is, it should be a simple fix.

Thanks Jules
(read many of your great threads, really awesome!)
How did you find that it isn’t pure white? Coming out of photoshop it was a png, so corel must have added a non white dot or something. When I look around with eyedropper it all shows as pure white.
And when I go to one bit bitmap, it can only be black or white - that’s the point (or so I thought!)
But you can see it, so I don’t doubt you just have to figure out where it is creeping in and how to check.
Thanks and happy 4th!

Oops, just looked at the svg file, not the Corel file. It’s bad.
I’ll have to figure out how to get Corel to do a good export/Save As.
Thanks for pointing me in the right direction!

This thread can close, I don’t see a way for me to close it.

It looks like a raster file, right? …That little scattering of dots is something that you see if it is not a pure white background. (It’s close, but not pure white.) Did it start out as a jpeg or an image that you downloaded from somewhere? It’s probably originating in that source image.

Easy fix though in Photoshop.

CorelDraw does have some issues with the GFUI, but so far they tend to only apply to vector images and fill rules. But the forum here, Discourse, will mess up an SVG file if it is not Zipped before loading. So if you want to upload something for someone to take a look at, just Zip it first, then drag it onto a post and drop it on a new line to upload it.

Your SVG actually did upload, it’s the tiny rectangle under the text. Discourse does a number on them.

I’m relatively new to the GF forum but want to share something I was surprised to learn about rastering .jpeg files: they don’t have to be black and white. The UI makes adjustments to create shades of grey. So the rastering process is way easier than I expected. It’s pretty much drag and drop.horses%20%26%20earrings|500x500

Interesting. I wish I could get grey-scale behavior like that on an embedded png, with transparency. that would be awesome. My image is still not perfectly black so getting several settings dialogs.

Also, another interesting thing popping up. I have two nested circles around the outside. Both no fill, both black, one is thickness .04" and one is .06". It detects them as cut and if I switch to engrave, they show up solid, even though there is no fill. I’m afraid I may be hitting the bug Jules mentions above. I didn’t see it before because I had a background color (white) corner behind the circle (under it too) but it turned that part of the vector into a bitmap. Weird. I’m sadly beginning to wonder if I am going to have t go back to Inkscape for GF, seems like it may not play nice with Corel. If anyone is using Corel successfully, please let me know! 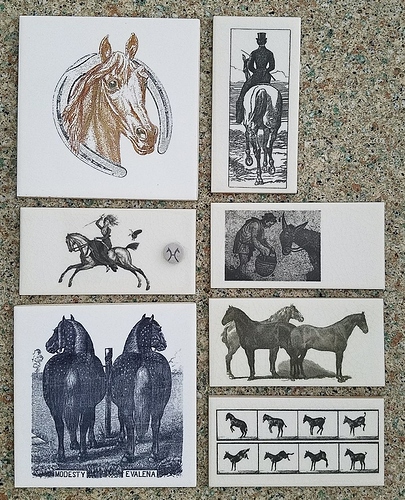 A stroke is identified as a cut.

A filled area is identified as an engrave.

If you want an area like you’re describing to be engraved, you need to either A. Rasterize it (which is WYSIWIG) or B. Use the Corel equivalent of the Illustrator expand stroke function (sorry, I don’t know what it’s called in corel). The expand function will transform your object from just a path with an appearance (what the stroke is), to a filled compound path object.

The easiest way to design for the Glowforge:

Wow those are great, thanks! Did you get some light background dithering from non-pure white?

Thanks…
I’m wrestling with a combination of tool issues and changes in thinking to what I am used to doing. I’ll see if there is an expand stroke in Corel like you mention. I was hoping that keeping strokes/vectors until the last step would result in less compound jaggies on curves. Maybe the best thing is to render to a jpg and then just use only 0,0,0 and ff,ff,ff for very dot - basically 1 bit color.
Seems like there is no need for an svg for tile etching any way, so this may be the best path.
Great how responsive the group is, especially on a holiday!
Thanks all!

You can definitely keep it as a vector. No issues with that. Just keep in mind that a stroke is just a single path - and to engrave the thickness of a stroke, it needs to actually be a shape (in this case, 2 paths that make a shape and the shape is filled).

The biggest hurdle you’re going to have is that the workflow is just different than what you’re used to which can make it seem unintuitive.

I’m glad you resolved it!

I’ve moved it to the Beyond the Manual so the discussion can continue there.

If have any other questions, go ahead and post a new topic.

I did get it all sorted out. The secret command/tool is Convert Outline to Object - this is the equivalent of AI expand stroke. I did that on the circles, converted text to vector and and object, used the png for the sea-lion as tight as possible and carefully review the svg file, tweaking as needed until it was just right.
Happy to report success! Now doing tests of speeds and depths. I have a Basic, and 1000/225LPI seems good, just did an 800/450 run. Will ink and compare results. I was curious to see if there is a difference in the LPI. It seems like with a kerf adjustment of .005 that 225LPI .004 should give decent overlap. 450 will basically provide additional depth due to overlap, basically multiple (if partial) passes. Actually quite pronounced improvement both in quality and depth. Here is a photo comparing the two. Sorry for the quality, I used my phone, good enough to see though… 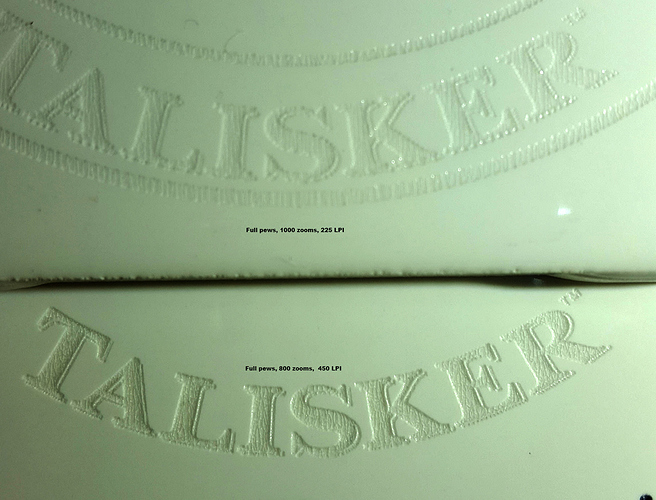 Anyway, I think I have the mixed raster/vector flow down, and the rest is just tuning. When I have a little more time, I’ll post a concise tutorial for other Corel users to try to save them some time.
Thanks all!

For your raster stuff, here is some food for thought on that resolution:

Thank you france.bob for sharing the good illustrations of your project engraved at 2 different settings. And thank you jbmanning5 for the explanation of the way LPI relates to DPI and PPI. I haven’t seen that clarification in my travels throught the many wonderful instructional GF tips.

I think I’ll be tweaking my setting in future