In Line Fan - Just Do It

Just wanted to throw my hat in with the folks who have an in line fan. Holy smokes, it’s a night and day difference in sound. Once the fan has been running for a little bit and you’ve gotten used to its sound, it’s no louder than a hotel room AC, or maybe someone vacuuming in the room over from you. I recorded a video comparison, and it’s a bit exaggerated because of how loud the head is, but dang the difference in person is so worth it. I almost forget the laser is going, super helpful for hours of being in the same room as the laser. Plus, now I can run it in the middle of the night or early in the morning without feeling like the guy who mows his lawn at 7am on a Saturday

My cheap inline duct fan is barely louder than my fridge when the compressor is running. I am so glad my internal exhaust fan finally failed!

I can’t see your videos, but I can read the glee in your voice

I’m having a hard time finding a 4" fan with enough CFM, so I go back and forth between getting a 6" one and figuring out how to attach it or just trying a 4" and see how it goes. I’m paralyzed by indecision :-/

Here’s the one I’ve been using for almost two years: 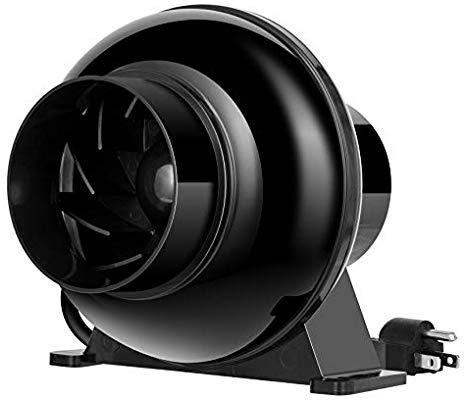 Sold - I tend to over-engineer, but knowing that’s been working for a couple of years for you is enough for me

…I am amused that they have a subscribe option for that…for those who need new inline fans every few months?!?

how easy is this unit to clean?

All that’s needed are a couple of 4-6” reducers and some aluminum foil tape.

just trying a 4" and see how it goes.

The 4" Vivosun fan works alone under most circumstances but when the big thru-cuts in Oak hit it was more like a backyard barbecue. However when assisting a working exhaust fan it works really great and creates a lot less grunge inside needing less frequent clean down. At $35 and no extra size up or down, it is barely worth the time to consider it.

Do you have one of those cyclone traps in line before it?

No. The provided cheap duct to the fan, then 25’ of similar (but a little better quality) ducting.

I’m using the 4” Vivosun along with one of those window fans with two side by side sets of blades that can blow in, out or exchange. Works fantastically well

For the cost of a can of 3M Novec degreaser I could buy a new inline fan. I would almost say its a consumable, though most inline fans detach really easily for cleaning.

That was kinda what i was thinking. But if it was easy to clean say pop it open and remove dirty bits to wash in the sink and reassemble it would be worth cleaning but if i need to buy some novec i think i would just buy a new fan.

It would certainly be easier than the built-in exhaust fan.

Thats a pretty low bar to jump over tho lol.

So you select in the UI that you have a compact filter and then just run the 4in VIVOSUN instread? I have not removed my grate and fan (YET), but would it work without doing so? I supoose not, as the fan would just spin and still get gunked up.

I would think it would spin and get gunked up but because it is not the actual air mover it would only offer a small resistance. I’m just waiting for my waranty to expire then that old fan is getting ripped out of there.

that old fan is getting ripped out of there.

I’d do that, but the pro makes it so hard to get at. I’m going to wait till it fails.