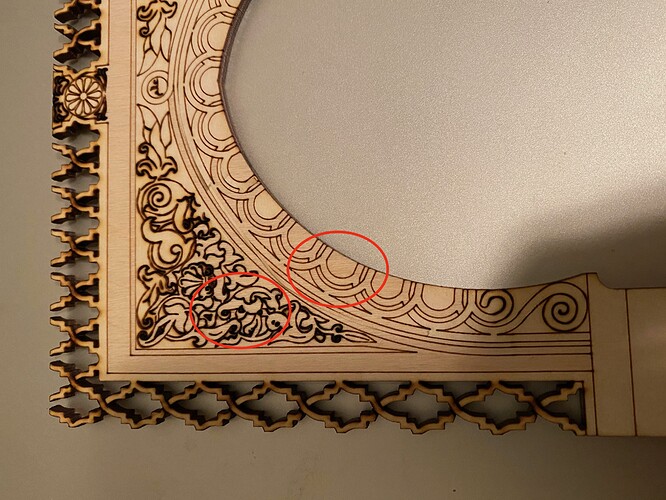 Make sure your artwork doesn’t have doubled lines in those areas.

It’s a common problem when you’re dealing with a flame, not a knife. Any time you have really tight lines that are being burned right next to each other, the potential for thicker lines exists. The places where the path turns on itself tightly is always going to be darker/thicker, because the machine has to slow down to make the turns. (The beam stays in that spot longer, so it burns a little more.) And the area is already hot. It causes more flame.

Using masking on the material is going to cut that down a lot. Once you peel the mask off most of the charring comes with it.

If you really want to adjust for it in a special design, you can place a break in the path in tight corners…frequently that will cause the motion path to move around and come back later to attach the previously cut segments.

Or, make the segments different colors and let the first set cool for a minute before running the second set without moving the design or the material.

That would be pretty extreme for this floral kind of design…you might just want to try masking and see if it helps cut that effect down enough.

I was thinking that it might be the case that it was just slowing down. Ironically, I may have caused the problem somewhat myself because I joined the individual lines into one long line where possible to decrease the head jumping from one spot to the next. I’ll probably end up changing the color of the lines and doing those at reduced power in the morning and see what the results are. I already had that masked, so I know I won’t see further improvement that way.

Hi @benjamin.george. It’s been a while since our last post, and wanted to check-in to see if you needed any further support for print trouble. Feel free to let us know and we’ll be happy to help!

I have experimented with the cut strength, but I think this is something different. Because the machine starting burning more on these lines whereas before it wasn’t. I’m not sure if it is somehow putting out more power than what is set in the GUI.

To demonstrate - the top cut is from two weeks ago. And then the cut on the bottom is the recent one. These had the exact same settings. Yet it is clear that the one on the bottom is putting out more power or the focus is off slightly or something. I don’t know. This is a refurbished machine that I just got a month or so ago - has been running great otherwise. 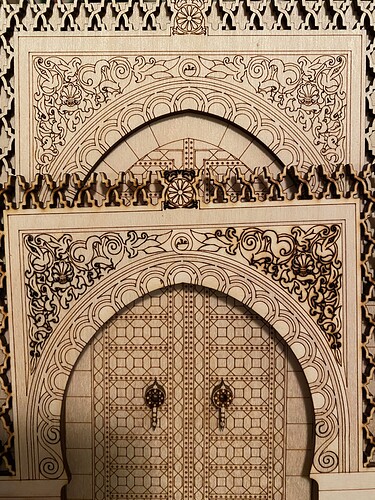 The thicker lines around the more burnt looking areas point to a focus issue IMO. That’s also a more common/likely issue than a tube putting out the wrong power somehow. Have you taken a good look inside the print head, where the lens attaches to the magnetic platform that moves up and down to change the focus? Take the lens out and look with a flashlight. There could be some damage or debris in there causing it to move during a print.

Thats a thought, I haven’t looked inside the tube in detail. I’ll do that and see if I can find anything and run a test cut. Thanks for the suggestion.

Thank you for providing that additional information. I’d like to compare the logs from your two print examples. Could you please tell me the dates that these two prints were run and the file name? That will help me locate the logs.

I’d also like to take a look at your optics too. Please send photos of all your cleaned optical components, with special attention to any damage you might find:

Once I have this information, I’ll review and follow up with next steps. Thank you!

I think that I might have figured out the issue - hopefully, fingers crossed. I had let me brother cut some stuff a couple days ago and I think that he had reset the focus height. Once I reset the focus height, it seems to be cutting better. I think that there was just enough difference in the set height that, when cutting at 500 speed, there was enough variation to sometimes cause those lines to fuzz and cut darker than they should have. I’ll post an update in a couple days if the issue returns.

Hi @benjamin.george. Thank you for getting back to us and I’m glad to hear that you may have resolved the print trouble on your own. I’ll leave this thread open for now, and if you run into any further trouble, please feel free to include any photos of the requested optical components. We’ll be happy to help.

Unfortunately the problem wasn’t solved. Welp. I rechecked all of the optics, everything is clean - no dust, no scratches. I also re-squared it. It honestly looks like it is going slow when it is trying to cut, even though it is at 500 speed. But that can’t be the case, because the print time hasn’t increased from before. So speed must be fine. The makes me think that it is over-powering the cuts somehow, but again, I don’t know how. For long cuts, things are working great. But detailed work is coming out blurry and very dark.

Ok - it is actually a speed issue. This is all one group that cut - so it shares the same setting. The left side cut in about 2 minutes time, and the right side cut in about 55 seconds. So for some reason, the first half of the cut had its speed reduced. But this makes no sense, because its the same group and shares the same settings! I’ve also uploaded a screen shot showing the settings, that it is part of the same group, etc. I think this has to be a processing error sending the wrong speed to the Glowforge.

I also took a video, so you can see the sudden speed up:

Meet Google Drive – One place for all your files 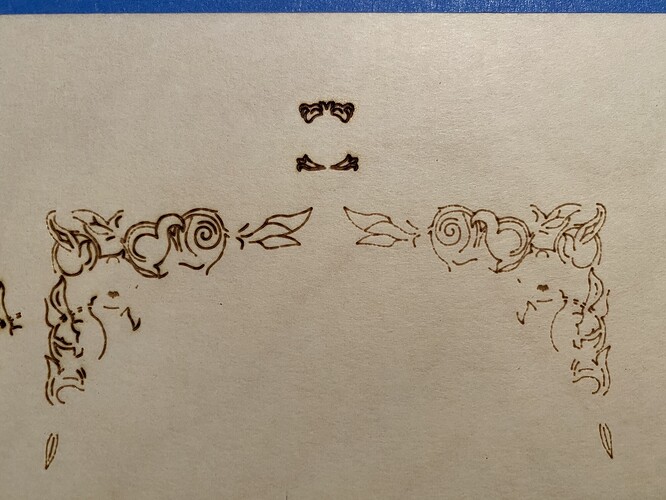 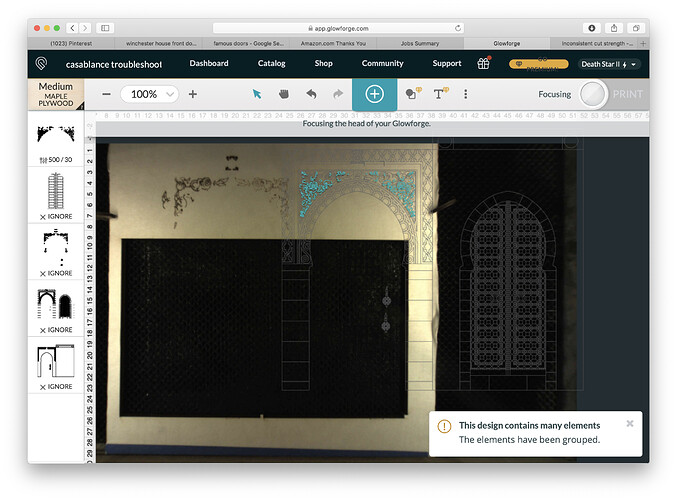 So I went in to AutoCAD and I deleted the left side and re-mirrored based on the right side. Uploaded that a viola, it cut correctly. But why??? The linework was exactly the same. Same layers in CAD, same color. What could be causing the GF interface to cut half the lines at half speed??

Your lines were doubled in the artwork. When you deleted and re-mirrored, you fixed it.

Nope - double and triple checked that. That was my first guess.

When it’s down at the node level it can be pretty hard to suss out. Sure is what it looks like when it happens!

For the thicker line issue, there might be some relation to the color 11 (salmon red) in AutoCAD. I switched to using that color from dark blue to be more visible. When I switched the color back to dark blue and tried to cut, the problem seems to go away. The speed is also better. I then switched back to color 11 and the blurry line returns (but the speed problem did not resurface).

Has anyone else had any reports of a specific color causing difficulties for GF?