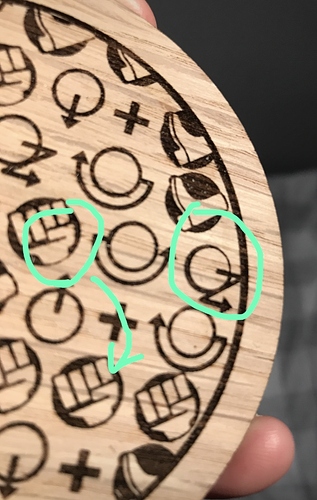 I’m having some problems where the engrave doesn’t match the artwork. As you’ll be able to see from the attached image, there are areas where it seems to be skewing and making the artwork look inconsistent.

Any ideas as to what could be causing this?

How does it behave on Proofgrade material?

Are the duplicates made within the Glowforge intervace by copy paste or in the design program?

Or is at a totally bitmap image?

Or is there an issue with a clipping/masking path or overlayed vectors?

Those are three issues that can cause un-intended results.

It’s been created in illustator and the whole thing converted to shapes and merged. No clipping masks or overlapping paths.

Saved as an svg and uploaded.

I’ve not tried it on proofgrade. I’ll give that a go.

and place it in the center of the GF, just to start ruling out easier items

I extracted the logs to investigate the problem you reported, and the first thing I noticed is the thinner line on the right most symbol is in the original design file. In the file, the coaster on the right, that one symbol has a thinner line.

Since this problem is being seen on materials that were purchased from another company, we can’t offer support for prints that don’t come out as expected. I’m going to move it to Beyond the Manual so other folks here can help. Should this happen with a print on Proofgrade materials, please open a new ticket in Problems and Support and we’ll help you right away!