I’d try running the Founders Ruler or similar design just venting outside, then going out of the apartment and checking. I’m in an apartment on the second floor, and my Glowforge cannot be heard outside. The vent, from the ground, sounds essentially like a dryer vent, and odors dissipate too quickly from the hose to be noticed outside. It isn’t an ideal setup for bad weather, but it is quite an effective temporary solution while I wait for my filter.

Glad to hear that the noise may be a little over-stated. What kind of setup to you have for venting out an apartment window? Is it just a standard ‘board with a hole and vent duct stuck in the window’?

The “dangerous” burns are going to be with materials that release hazards compounds were burned (knowing the MSDS is a good place to start).

materials would be cleared, since Glowforge is doing a Charcoal and HEPA filter design.

The charcoal will help neutralize orders and some VOCs and the HEPA will address other VOCs and such.

I have a ‘magvent’ (can search from amazon) on either side of my screen, with hose inside and hose outside running off deck. There is a picture on one of my other posts in the forums. 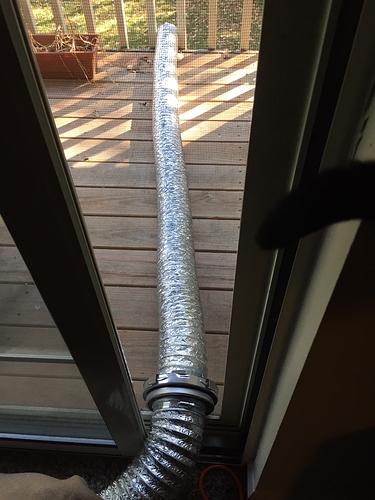 The mag vent is an interesting solution. It certainly makes the hose connecting process less painful. I’d still have to add something to block the window though since the screens aren’t really accessible from the outside.

I personally like the cabinet made in another thread https://community.glowforge.com/t/airflow-measurements/11260/13

Having a deck for that is nice, to be sure.

I have mine exhausting out the basement window. No real issues in the basement but every once in awhile I noticed it upstairs.

Got my Pro today

! The noise is not nearly as bad as people have made it out to be. I find it to be much quieter than a vacuum (granted I use a Dyson for comparison), although the pitch is higher. It seems like if you have a window reasonably blocked off with just the vent coming out the noise wouldn’t be bad at all. The noise outside wasn’t bad even with a door half-open with the vent running through. Even one room away from it with the door closed is pretty silent.

After seeing and hearing it in action, I’ll probably run it through something like the “fume coffin” idea from instructables / the nice cart I listed earlier and then vent outside. At that point you’d have to have some really irritable neighbors for this to upset them.

Never thought the sound was particularly loud. Glad someone else feels the same. But never lived in an apartment and my noisy neighbors are coyotes.

my noisy neighbors are coyotes.

My coyotes got a jackrabbit last night around

- that will make most people wish the Glowforge was at least 2-3x louder.

HI Samrcawley,
If your in to DIY then build a box using a dimension equal to a filter you can get at your local supply store. The cabinet idea is good but man those things are heavy. If your going to need something temporary then just keep in mind you want to make the air flow through the carbon slowly so the cleaning can happen over the large surface area afforded by the activated charcoal. You also need to collect the particles before it hit the charcoal so it does its job the way you want and doesn’t junk up the charcoal. The box can be built with slots you can access from the front by making one side hinged and of course you use a seal around the filters. With multiple slots you can do the pre-filter and charcoal filters you can use multiples of each and you can slow the flow down and still have the ability to make filter changes without to much effort.
Regards,
D
If you need a picture or design just let me know I can link it.

The cart has wheels, which has some appeal, but I can see the logic in not spending too much effort on a temporary solution.

I haven’t had much luck finding good filters outside of the hydroponics solutions I’ve found online. I’ve seen a couple furnace filters that include carbon, but not much better.

The common solution seems to be

as long as you are venting it outside.

Do you think it’s possible to use that system, inside a box that is within Glowforge cuttable dimensions, and have it blow air that mostly doesn’t stink even with acrylic or leather? Preferably including a layer of noise dampening material inside the box since there is now another fan.

I think it would be a nice-to-have for the community if a set of plans can be come up with and a cheap buy list for essentially a “fume coffin” style device that can be entirely made by the Glowforge. But, I don’t know enough HVAC to understand the amount of force the fan needs to put out to be able to maintain the 200CFM put out by the Glowforge. If people think this would work though, I’m willing to give it a shot.

HI Samrcrawley,
The filter is too small. Its listed at 190CFM which is below the 200CFM of the glowforge fan. That cfm will cause a back pressure. I wouldn’t do that to your laser it would most likely end with smoke etc coming out of the gaps in the machine which would ulttimately smell up the room. Give me a few minutes (hours) and I will respond with better information, have to run out have appointments right now.
-D

Hi samrcawley,
Okay so there are several solutions you can buy all going to do what you want but all are going to cost. I really like the filter that Glowforge is proposing, but I am not confident in its ability to eliminate odors when the lid is open after the job is complete, but who knows they may surprise us. I can tell you that if they delay then I will go with my own design.
I haven’t seen the laser yet so I don’t know if the fan is pulling or pushing the air into the Glowforge cutting area, or for that matter I don’t even know if there using a non-balanced air flow with two fans.
Okay so if your space has room over the top I would build a dual system that acts like a laminar flow hood and a box filter. It all depends on what you have available to keep costs down.
You will spend some money but you will get a custom fit for the filter. The box filter pulls the air from the outlet behind the glow forge and the laminar flow helps with room air leakage. Buy pulling air into the box filter from above the unit.
Regards,
-D

I’m not sure anything apart from prolonged fan runtime will prevent the odors when you open the lid. Considering that some of those odors are a part of the product and require cleaning to remove, I’d suspect even with prolonged fan runtime, the odor opening the lid will still remain to a certain extent.

I don’t think that is practical for any laser cutter and filter system.

Hi jason.fuller0,
I agree, not much you can do about the material itself.
What I would be worried about is the material that might give off a less than desirable smoke (toxic) . I work with some rather nasty chemicals and of course we use them in a fumed hood hooked to a scrubber system. It would be nice to get some more specifics from Glowforge on the filter specs.
-D

Well, the point of the filter is to cover you for that stuff, provided it is offgassing from

. They, naturally, cannot guarantee every possible material, including stuff that isn’t laser safe. At the end, it is let the buyer beware. I throw a LOT of non-proofgrade in my laser, and I’m comfortable with venting or filtering as a rule. Anytime I was in doubt, I’d go full vent over filter. If I’m running proofgrade, no doubts. They may even include a list of materials or substances that are covered by the filter when it is released, don’t know. Either way, if you decide to burn PVC, you are on your own.