I am having an issue working with Inkscape. I am trying to build this monogram from svg files I purchased. When I tried to execute “unify” it showed one of the objects was not a path. I clicked on each object and made sure to convert them to paths including the letters in the font, but the only command I was able to use after all was “combine“ which left overlaps everywhere. As you see there is overlapping in the objects over the circle and above and below the letters 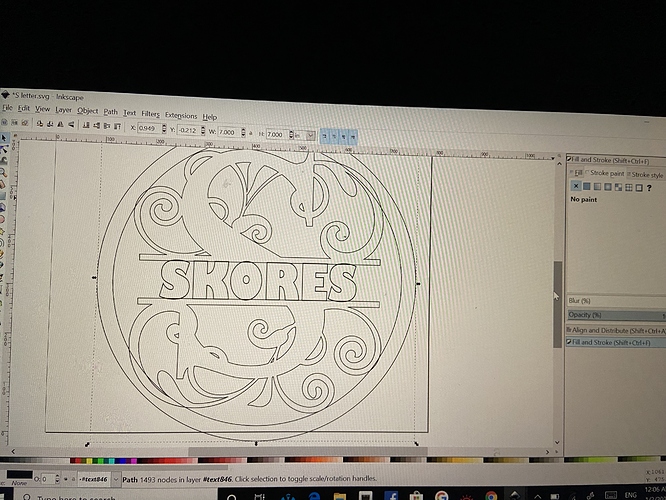 My guess is that one is a group. You’d have to upload the file to be sure.

Wait nope I just zoomed. See at the bottom, path in layer #text846.

When converting text to outlines you have to do object to path, then ungroup the letters and do a Union on them to make them one path. Then you can do a Boolean with other paths.*

99% sure that’s your issue. You’ll need to upload it and explain what you’re up to in a bit more detail if you want more help.

(* well ok there is a way to do it without ungrouping them but that’s a bit much to discuss here unless you really don’t want to for some reason. I can’t think of why you would need it here so I’ll skip that part.)

I actually highlighted the entire text word and did object to path, then nothing. After that I did unify and then since nothing happened I combined them. Since they are script letters, I thought it was going to be difficult to unify them unless I did it one by one. I am trying your suggestion now and see what happens. Thank you so much for your input

I let you know what happened.

Just snapped a quick video of the steps.

Yep, I’ve come cropper with this before as well. I’m pretty sure you are right.

Also you might want to switch to outline mode to better see the overlap. The “E” in Shores looks a bit close.

Thank you!!! I love this community group. Everyone is so helpful. You really make things much less complicated for newbies like me. 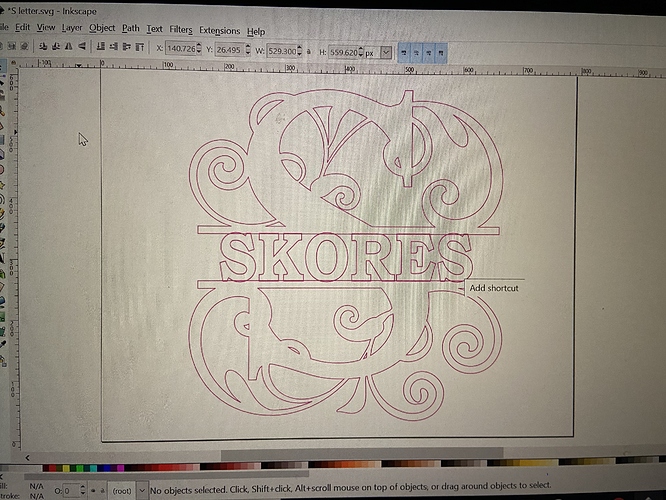 image4032×3024 5 MB
I tried it and retried it and still the final product looks like it has the overlapping lines. The svg file for the split monogram is two objects. When I tried to do object to path it didnt work. It did when I used stroke to path. Once I got both paths, I typed the word in the middle, scaled it enough to touch top and bottom split monogram and did object to path, ungroup, then unify. After that I picked all 3 and did unify, but the final object has the lines as before. I am unsure of it all now and pretty discouraged. The ungrouping part I think should not be done since it is script and not cursive, I tried it, but no luck.

Upload the file and we’ll take a look at it.

You probably have an open shape somewhere, but we as a whole aren’t psychic, although we are pretty good educated guessers. At this point the file would be necessary to figure it out.

If you can’t share the file wide because you don’t have rights to it, you can either DM me and we can figure something out using screen sharing, or you can try asking the person that sold it to you for help.

When I tried to do object to path it didnt work. It did when I used stroke to path. Once I got both paths, I typed the word in the middle, scaled it enough to touch top and bottom split monogram and did object to path, ungroup, then unify. After that I picked all 3 and did unify, but the final object has the lines as before.

Try zooming in super close to the monogram bits. The “Stroke to Path” command gets rid of the stroke width, and converts it into a filled compound path. End result is you have two parallel paths that are so close together they appear as one if viewed from a distance. Go to “View>Display Mode>Outline” and Inkscape will show the paths without any fill color or stroke width applied. This can sometimes help see things that are causing troubles.

I imported a monogram S JPG that I found on pinterest, traced bitmap then deleted original, added and scaled letters, converted them to path, ungrouped, aligned everything so there was a little overlap between the break in the monogram and the top/bottom of the letters, selected them and the monogram, hit Union. Done.

It took me less than 10 minutes, and that includes getting up to remove the paddle from my bread maker, and adjusting a couple of the “disconnected” parts of the design to make one piece.

If you are still having a problem, please send me the file, and I will work on it. I love things like this.