Interface between the GF and the GF Filter

Finally, during a long engrave the noise of my GF got to me. Usually the jobs I do are (almost) all cuts and scores and take less than 15 minutes, so I’ve just tolerated the noise. But that engrave got me to bite the bullet. I installed a Cloudline A6 inline fan. What a difference! I shouldn’t have waited so long.

Then I got to thinking. The Cloudline uses a USB cord to connect to the little button paddle thingie that turns the fan on and off and adjusts its speed. And as I recall, there’s a bidirectional IR interface on the bottom of the GF that talks to a GF filter if you install one. Might it be possible to build a little box that sits between that interface and a Cloudline fan to automate turning the fan on and off?

Before I spend a bunch of time on fools errand, does anyone know if the GF-to-GF-filter interface has been reverse engineered? Has anyone tried?

There is no “interface” to an external fan, from GF or otherwise.

You can select “filter attached” in the workspace interface, which turns off the exhaust fan. That’s it.

I plug my GF and external fan into a Belkin surge suppressor and use the on/off button on the suppressor to fire them up together.

That IR receiver was never put to use, because the under-the-Glowforge air filter concept turned out to be impractical. So there’s unfortunately no signaling between a Glowforge and filter you can intercept. The filter they ended up selling is just a separate box you turn on and off by hand, same as your new fan.

If you ordered adapters/hoses you are pleased with can you post links?

I was pretty sure there was such an interface to that under-the-GF filter that never happened. I remember seeing it on a block diagram of the GF electronics. So the hardware is almost certainly there (at least on early an GF like mine) but the firmware probably doesn’t use it. Still, I wonder what an IR receiver might see, if anything.

Sure. I got a Cloudline A7, two 6-inch to 4-inch adapters, and 5 feet of insulated flexible hose.

The outside diameter of the fan is about 4mm less than the inside of the adapters, so I glued a strip of 2mm EVA foam around the outside of each end of the fan, making nice airtight couplings between the fan and the adapters. I mounted the fan to the wall vertically above the vent to the outside and connected to output of the fan to the vent with about a foot of the hose. The rest of the hose I connected between the GF and the intake for the fan.

When the GF is in use, it’s very close to the fan intake, so the hose between them is basically completely collapsed into a short, compact run. I kept the hose long so that I can easily move the GF if I need to (to use the pass through, for instance) and still have it connected to the fan.

Thanks a bunch, looks like you found just the right set of parts for me too!

Just throwing this out there…

The exhaust fan speed control signal from the GF is a steady voltage (the fan supports PWM but in the GF, it is run at full speed - which is a constant voltage on the control signal.) The speed feedback is not monitored.

So you could easily build a circuit that uses that signal to switch your external fan on and off.

I have the skills and all the components. I chose a $12 WeMo “smart plug” and just tell Alexa to turn it on and off.

There is no evidence of the IR system on my machine. Much of the pre-release circuitry was omitted from production models, including the USB port. Mine is from Dec 2017, so it’s not one of the very first production ones.

Yes, I can find no evidence of an IR system on mine, either. It’s from about the same time as yours. The idea of using the signal to the exhaust fan is an interesting one. If I get around to doing exhaust fan-removal surgery on my unit, I’ll poke around at a bit to see if there’s a neat, tidy and quick way to bring the signal to the outside world.

I was kind of hoping I could just eavesdrop on the GF using IR to tell the non-existent GF filter to turn on/off. It would have been so non-invasive.

If it helps, here’s a photo of the installation: 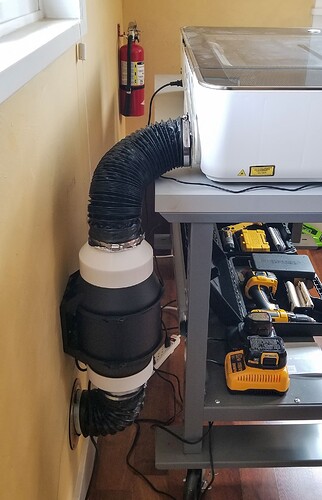 Do you have on of these? How well does it work? I could use them on a couple of my shop tools, if they do.