Another me too: I have an iPad Pro and Pencil that I love for sketching stuff. I have a couple vector apps that I have barely used. I typically move the sketches to a desktop computer. The mouse and keyboard seem like a better interface for doing vector graphics. The stuff I do tends to be very constructed. I like having an interface where I can, e.g., enter exact dimensions for something quickly. Things like quick access to the context menu are also nice.

It may just be that I haven’t given vector graphics on the iPad a fair chance yet but, what little I have done feels like the UI is just not as efficient for vector work. I’ve been using desktop apps for vector images for a long time, though. So, it is difficult to be sure it isn’t just that I am more familiar with that.

Edited to add: I do regularly use my iPad in conjunction with a desktop machine, as a graphics tablet (via Astropad), mostly for raster images.

I think you all have reaffirmed my fears of buying and iPad. I think it could be a great tool (for sketching or basic stuff) but it seems it is not the right tool to do precision drawing for the glowforge. Sounds like the general consensus is that you need a computer somewhere in the mix to maintain precision and to use the tools you need to use.

I have A LOT of experience with vector and CAD programs on the computer so making the leap to iPad only seems like I will lose precision and maybe ease of use.

I forgot to mention too, that I have a nice Wacom tablet hooked up to my desktop, which extends my abilities even further than if I were using my iPad.

I have a prior generation iPad pro with the pencil. I bought it for using OnShape CAD on location. Never found it particularly convenient (the prior pencil was just like a real pencil, always somewhere else and no easy way to attach it to the iPad. I guess if mostly I did artistic stuff it would be like my Wacom tablet. Except I mostly do CAD derived projects, so in CAD or Adobe Illustrator, I find a mouse and keyboard way better than pencil and tablet keyboard. I will sometimes bring an iPad or my iPhone 7+ on location to tweak a measurement live in the field on a cad drawing, but otherwise my pencil has been idle 98% of its life.

So, I have one of the first generation, 12.9 in iPad pro and a pencil, and I don’t use it for Glowforge stuff either. I primarily purchased it as a Music display device, and am absolutely horrible at sketching stuff, so it’s not nearly as versatile in the design respect as I would have liked it to be. I may try to do some more stuff with it over the holidays when my music schedule settles down, but really, my iMac is what I use for design, and my surface is my actual at-the-machine device(as the Glowforge doesn’t live at my house).

I use my ipad pro / pencil as a sketchbook. As far as a portable digital drawing platform, I felt the iPpro was the best offering when I went and tested a bunch of options last year. It’s still no wacom, but pen response was far more reliable and accurate than on the android and Surface devices I tried. Using a textured screen-protector really helps a whole lot with simulating the feel of pencil on paper, as opposed to the zero-resistance fell of the plastic stylus-on-glass.

The current adobe mobile apps are not full ports of the desktop programs, although photoshop is supposedly coming soon, and illustrator will follow eventually. The Draw app is still very useful for getting ideas down on ‘paper’ in vector format, and with a CC subscription everything is saved to the cloud and immediately available from the desktop app for further editing/manipulation.
Most of the “menu operations” (for lack of a better term) that I use in AI still require the desktop version. This hand, for example, was drawn in Sketch, but if I wanted to knock out some layers for engraving, merge the individual strokes, and make a cut outline, I would need to send it over to the desktop. 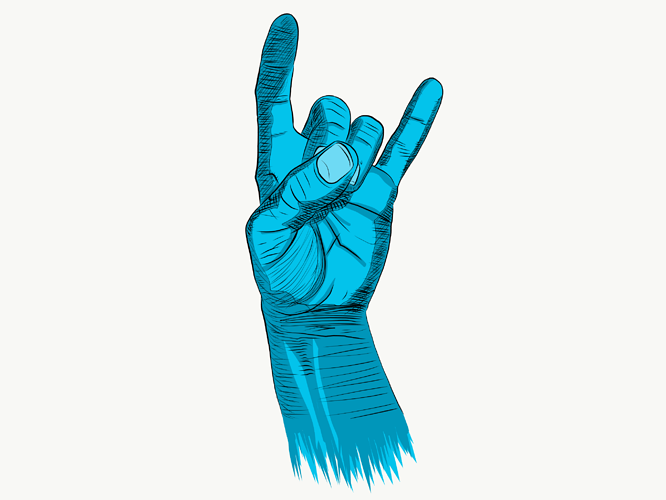 I don’t do much raster work on the ipad, but I did buy Procreate, which has a lot of great drawing features built-in, and is able to be expanded with add-on brushes and such.

i also have Vectornator, and autodesk’s Sketchbook, neither of which I have managed to get into deep enough to have an opinion.

I have done several projects entirely on the iPad. I use Affinity Designer and Graphic, both of which are useful vector drawing programs. I use the pencil for very precise design and like it a lot. Once I have the design, I send it to the Glowforge app to upload it. Then, I go to the web app to print it… I still prefer that interface, so I only use the iOS app to upload. Anyway, the workflow works well for me. I also have Graphic and Affinity Designer on the Mac, so if I do decide to go to a computer the transition is simple. Honestly though, I go there less and less as I get used to the ipad work flow.

So I’m proof it can be done.

Thank you for that perspective! Do you find that you can be as precise as you need to be on the iPad? I think at this point my plan is to keep the computer but get an iPad to supplement it. Most of the stuff we’re cutting either is really small and needs to be precise or a larger project (but I could do that in AutoCAD at work if needed).

As far as your workflow - You create in the Affinity Designer and Graphic - Save a copy as a SVG somewhere? (on the iPad or dropbox or something?) then upload with the app (can you upload without the app?). I agree the web interface is far better at this point in time although I haven’t used it on an iPad.

For exacting work I really like Graphic and the keyboard (I know - seems weird to have the keyboard on the iPad for design work). In Graphic you can actually enter numeric values for sizes and positions, so you can get everything exactly how you like it. Being able to go from the pencil to the bit twiddling detail of the numeric entry is really the part that I like the most about this workflow.

Getting the design up to Glowforge is the most janky part of it all. I export an SVG directly to the Glowforge app (I don’t know any other way to upload from the iPad). That gets it up to Glowforge. Once I have my file in the cloud, I open the web interface in either Safari or Chrome and print away.

I will say that it is not completely smooth at this point, but I really do love being able to switch from the pencil to keyboard on a single device that I can carry with me right over to the Glowforge. For example, some time ago I posted pictures of some coasters I made from depth charts of a lake. I don’t think I would ever have done that project without the iPad. Using the pencil to trace the contours was the best tool for the job by far.

It is only in the last few months that I’ve been doing the complete workflow on the iPad, but it seem that I’ve found a path that works for me. I think I’ll be upgrading my iPad Pro to the latest version as well… the new ones look sweet…

I have an iPad Pro and Apple Pencil and I find it convenient to use InkPad to create vectors from photos by tracing and then outputting as SVG while I’m sitting on the sofa. I wish Adobe Illustrator worked on the iPad and have’t tried Adobe Draw because they don’t use the same raw files.

I haven’t tried iPad GF because I have a three monitor system and speedy desktop for doing my hard core designing that sits right next to the GF.

I’ll have to look into Graphic. Thanks for all the info! its really helpful. and I agree the new ones look impressive.

My wallet just keeps getting lighter and lighter…

Use Vectornator!!! Its a great tool when using the Apple Pencil in combination. Definitely check out some tuts online, so you can get the hang of it. I’ll have to try doing everything on my iPad…that would be awesome!
Here’s me just using vectornator. I wish you could size things in vectornator, but I use the canvas to approximate that.

Graphic and the keyboard

I’ve had Graphic on my iPad forever and I’ve never really used it…although I’ve fiddled with drawing a vector in it. I’m glad to read about your experience with that app and am now going to try it. Thank you!

Just started playing based on your input, seem to be a great solution. Have to modify my workflow. Sounds like Apple is going take my money again…

I use Clip Studio for a lot of stuff. It used to be Manga Studio until they rebranded it not too long ago. The comics industry has been using it for quite some time now. Fast, stable, great brush rendering engine, AND you can make vector layers to draw in, in which all the lines you draw can be edited with the anchor points and bezier tools. So far, i’ve used it as the first draft of all my projects. Highly recommended.

Does anyone has good settings to engrave the actual pencil with my initials?

Seems like this is really a separate topic but, there is a fair amount of discussion of engraving pencils in the Beyond the Manual category. e.g.,

Not any pencil settings will do with the Apple’s plastic pencil.

Ah, yeah … I wondered if you really meant “Apple Pencil” and not “actual pencil” after seeing your other post …