Is that bit of scrap big enough?

How many times do we need material of a certain size, especially to test a concept? It would be wasteful to take a fresh sheet but is that scrap close a bit big or close a bit small?

Now I have had a measuring square for some time now by moving the material to the lowest possible point and the farthest right point and then making a horizontal cut line as long as possible as close to the top edge as possible, and a similar vertical line on the left.

When this is done you have a piece as large as you can make and a “carpenter’s square” that is the scrap. With a pro you can put the design on a 30-degree angle and engrave the whole length, while with a basic or plus you cannot engrave all of it. I have posted this set of rulers before, but as I cannot post the two cuts mentioned above (you have to play with it yourself to get it right) I can repost the accurate scale to engrave (I just chose to engrave the inches but you can choose either or both). I also engraved some clear acrylic as a ruler to use as shown below. (The green line can be cut first and make finding the 30-degree angle easier.

With a bit of double-sided tape, I fit the angle to the lid. It will easily come off if needed but it will not slide off when the lid is opened (and will keep other stuff from sliding off).

I took photos of two situations… 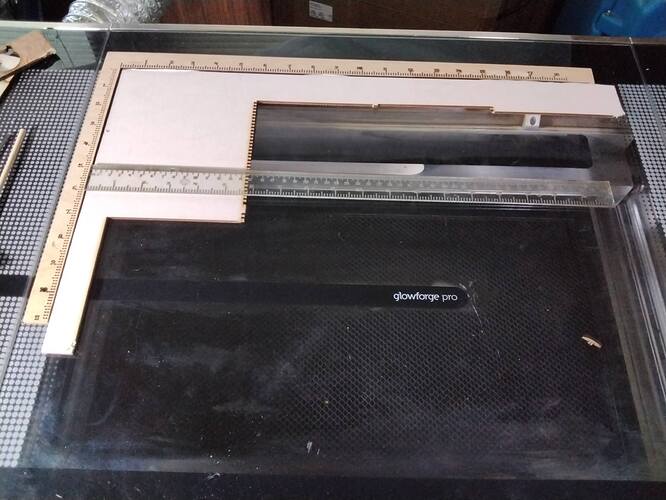 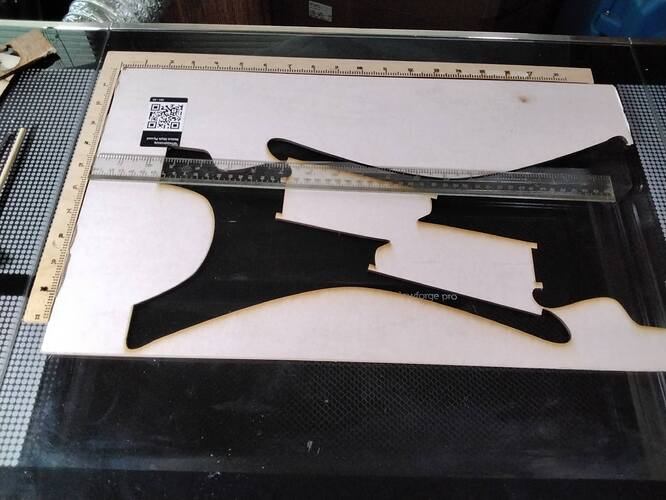 No joy here either. However, even though I spent 6 hours, I fixed a photography lamp that was broken, organized a number of tools needed to fix the lamp, and found my bucket of tiny screws that became disorganized several years ago when the 25 trays they were organized in fell out all at once and cursed the manufacturer for using such tiny screws put in so loosely that they just fell out to “who knows where” so my 2mm screws looked like lag bolts but managed to work.

Perhaps tomorrow I will find a proper sized piece of scrap.

That’s what keeps me from doing complex or ‘new’ projects. It’s far too likely I’ll need something that’s elsewhere, or really needs a new storage place, or I have to move five things to access one (seemed like a reasonable idea at the time…). Glad to know I’m not the only one!

likely I’ll need something that’s elsewhere, or really needs a new storage place, or I have to move five things to access one

It’s called an Archeological filing system. you dig in the pile until you find something you lost before you lost the thing you are looking for so you know it will not be deeper into the pile. Unfortunately that pile is now out of order, and only a vague collection that you saw in in this pile will ever let you find it again. Of course when you do find it you will not be able to do what you thought it would with it.

I had a tool for the flex shaft that turned rotational movement into back and forth movement excellent for stone setting. I had hoped I could get it to act as a really tiny keyhole saw to cut paths better than a mill cutter that had to be round and thus not as strong, After years of looking I found it but it would not do the job I had in mind for it.

This is also why I am holding off buying a cutter by Silhouette or Brother until I am sure I can get it to do Repousse.

You can never have enough rulers! Thank you.

I keep a steel rule next to my laser, but taping it to the lid is such a genius idea, Guess what I’m going to do this afternoon!

I keep a steel rule

Mirroring the scale and printing on green glass PG and spray black before removing masking works pretty well also when laid on top of the material.