IT WORKED! (Before & After) THANKS!

I want to thank everyone who offered their assistance in helping me to solve my issue with banding across my images. I had known from my notes (#4) note to engrave on wood, ceramic, mirror, or glass below 340 DPI, unless engraving on paper, which would be at a minimum of 270 DPI…low power, of course. I had, recently, been unable to change my settings which seemed to be stuck on 225 DPI. Without going into great detail on how I was able to change it, I increased my DPI to 675 which eliminated the banding. The contrast is a bit high, but very easy to fix for future engraving, Also, since the DPI was increased, it increased the engraving time by about 20 minutes. 22 min/225 DPI and 44 min/675 DPI. Thanks everyone. Now, I have to find my contact for that contract. 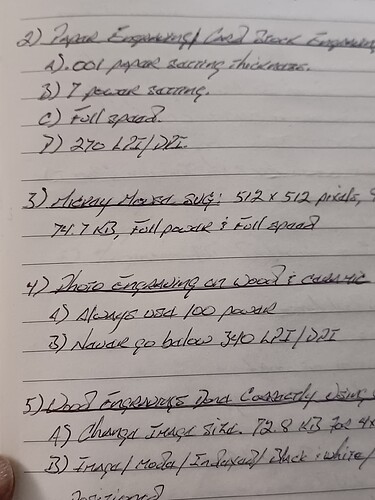 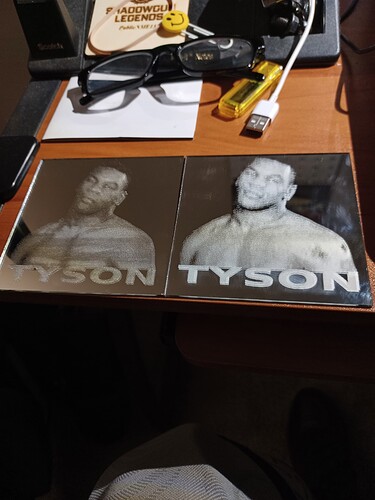 Glad you got it resolved!!

Thank you. It was very simple to resolve. I feel so stupid.

Yeah, so I wonder if the result here was a factor more of “amount of laser thrown down on the material” more than “LPI”.

Without seeing your full testing runs, I wonder if dropping the speed at lower lpi would have solved the issue as well?

(Also moving this thread to BTM, since we’re talking about settings. Forum policy.)

I did. I was still getting banding at 340 DPI at 500 speed. It was top and bottom banding at that setting. Since I’m getting, generally, good results with 675 DPI at 500 speed, I may ramp up the speed a bit for faster productivity. 1000 speed at full power may be a bit much, but I have lots of material to experiment to achieve the best formula. Thanks.

Just remember us folks when you make so much $$ from that order that you can’t spend it all!

We all make mistakes, try not to beat yourself up.
The mistakes are the things we remember the most and usually don’t end up repeating, so… lol

340 DPI at 500 speed. It was top and bottom banding at that setting. Since I’m getting, generally, good results with 675 DPI at 500 speed, I may ramp up the speed a bit for faster productivity.

Since you are engraving images you should be able to go faster than 1000 speed depending on which machine you have (a pro can do up to 4000 speed.) I would experiment with higher speeds up to the point the image is not strong enough and come down a bit.
As I noted in the other thread the fact that your images are wide means that you can improve the time taken by raising the speed much more than if they were narrow.

At some point going faster actually takes longer as the head needs time to stop and turn around, but the wider the work the less percentage of the time that is.