It's not rocket science, oh wait

I frequently get asked to make anodized luggage tags for friends and family. My niece is a Captain in the Army in the artillery and works with the HIMARS (MLRS) rockets that we have seen used in Ukraine with such effectiveness. So of course for her luggage tags (she recently changed duty stations and needed new tags), I figured putting a MLRS mechanical drawing on the back would be cool. So first thing was to get a drawing of one and I found one on wikimedia, so I downloaded it and I tried an engrave but it kind of looked terrible, and I wondered if you could use score given the thin lines and for that it would need to be vector… So next I did an auto trace in adobe illustrator. It looked pretty good. and here is the time lapse (BTW score vs engrave was like an hour vs 4 minutes).

In case you’re wondering about all the crap around the bed, it’s because you can’t see the black tags with the camera reliably so I use a piece of paper under the tag to make the outline visible. The black acrylic is a nice t-square to get the tag squared in (has the same radius corners to fit the tag). 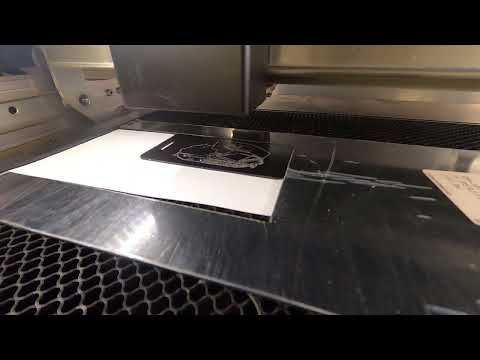 Coolio! Can you post a pic of the final result? 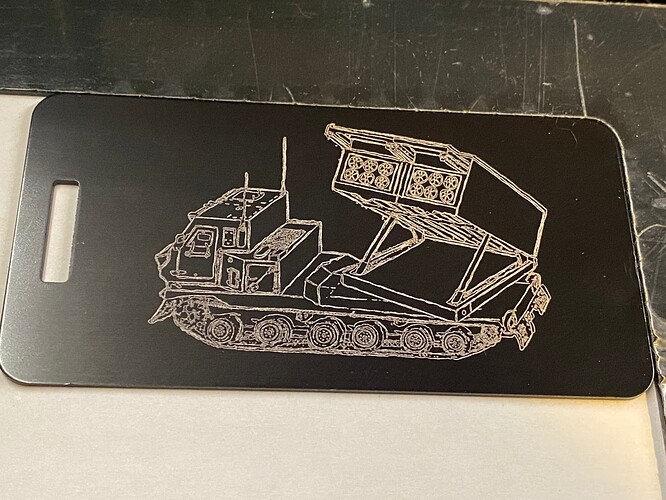 Nice work Henry, the contrast is great and the black tag should stick out on the luggage carousel.

Definitely cool looking! Though if your score lines were the same length as the engrave lines the difference would be a lot less.

Looks great. Where do you get the blank tags?

Where do you get the blank tags? 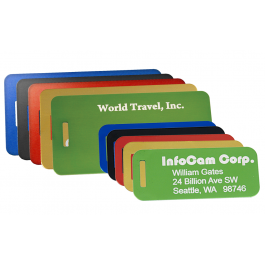 BTW: some of the colors (particularly Blue) don’t register on autofocus (i reported this to support) so the thickness of these tags is 0.04" for manual thickness setting and if you do my little paper underneath trick, 0.05" seems to work just fine. They also have tags in pretty much every other material (Leather, etc)

You are a damn fine uncle! That’s a very nice gift.

I discovered this when I bought blue masking paper, but solved it with a small bit of some thin white tape on top.

The Glowforge has more computing power than all of NASA - ground-based and Apollo - when they put men on the moon.

Even a “smart watch” does.

Well it is somewhat tricky to compare since at the time they used a lot of analog computers which are hard to compare to a digital system. There is a great article from a few years back on similar things on ars technica on the Missouri class battleship’s analog computer fire-control system. Sort of an amazing rube-Goldberg system that weighed many, many tons but not completely comparable to a digital fire control system. The coolest thing I thought was the movement tracker that allowed the system to track a target while the ship sailed forward. So how could you simulate forward motion mechanically since the ship can essentially infinitely sail forward? They used essentially a record player (people under 30 can google what that was) with a rolling ball bearing where the needle would be, and as the ship sped up or slowed down you moved in or out on the disc. Worked extremely well, and had some advantages over digital systems in that it was relatively impervious to EMP, not really hackable; but the flip was obviously temperature would have a large effect on accuracy as parts shrank or expanded.

Gears of war: When mechanical analog computers ruled the waves

From the archives: In some ways, new Navy computers fall short of the power of 1930s tech.

wow you left out magnetic amplifiers