So after a really bad start to my Wednesday this week, I received my GF in the afternoon and was able to set it that night. My biggest concern was that it was going in the spare room on the second floor where my computer is in the basement.

Well with the WIFI and the fact that you press the button on the GF to begin printing, that really made me feel better and less concerned about the distance. Now, it’s the only exercise I get, running up and down the stairs for positioning and then printing.

So his name is Eitri after the dwarf that created Mjolnir, Thor’s Hammer. I wanted a different name but a buddy of mine beat me to it. Eh, no worries. This is just as good a name.

We only printed on thing the night I got it to make sure that everything was working. My BF, Bryon, used the tablet to print the Founder’s Ruler. He accidently futz the size so it’s not correct but, hey! It’s still awesome!

His comment afterwards was “Here is the most expensive ruler you will ever own.” Shame I can’t use it.

The weekend gave me a chance to start printing other things and start to navigate Inkscape. I will also be using Fusion 360 but don’t have anything started there yet.

In this first photo, I have the ruler, the keychain and then a celtic cross made in Inkscape. 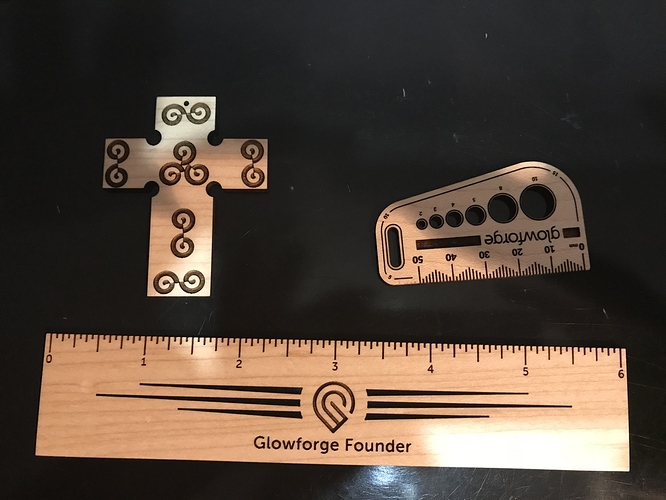 Then I have the first Trace project with one of my daughter’s recent pieces. When I first saw it, I knew it was going to be the first one under the laser! 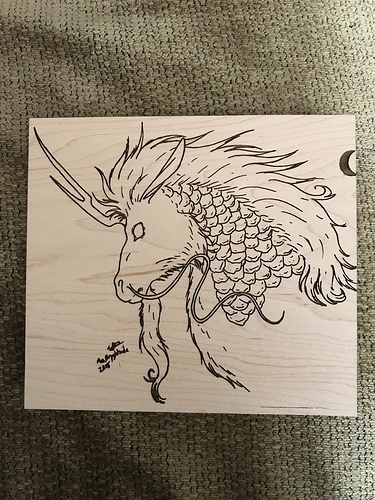 Then I wanted to try out the photo engraving so below, I have a picture of my dad when he was in the Army and my mom in her HS graduation picture. I didn’t change anything on dad’s photo since it was already black and white but mom’s was in color so I applied different filters until I found one that wouldn’t blend the background into her gown. 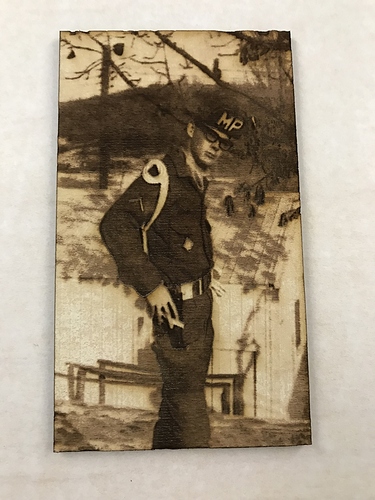 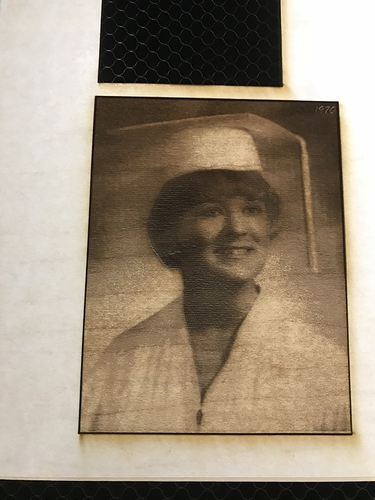 Going to do more designing today so not sure if I will be printing more but i am having fun!

How long did the pictures take to print? They look great. Well done.

Wow, your first projects are amazing! I’ve been using a Glowforge for nearly a year now and I’m still not very good at photo engraving (I guess I don’t do it enough). Yours came out great!

Huh! Wish I could draw like your daughter! (The projects all look great - the engraves turned out really well!)

I like the name. Machines on my LAN are named after various things from Norse mythology. I probably spent an hour looking through Old Norse lexicons trying to come up with an optimal name for the Glowforge. I’m not sure StjarnaSmíða quite rolls off of the tongue. So, still looking.

Aside: Does the GFUI support UTF-8 characters for the name?

They both took about 22-25 minutes each.

Your kids artwork is just wow!

Several months ago they expanded the character range, but I’m not sure to what.

Great job Aumanjoi! Just take it as a compliment that we had the same idea for a name. I am looking forward to seeing what you make. Maybe we can collab on some stuff for the SCA/Ren Faires. I keep coming up with ideas I want to try.

Also, our GF is in the garage, and our desktop is on the second floor. I am definitely getting my steps in too!

I certainly take it as a compliment as great minds think alike!

Yeah I have a bunch of ideas for that as well. Hopefully you will be coming to Pennsic this year!

YAY!!! Tell the missus I miss her!

You’re off to a great start! Opening and closing the lid also counts as exercise, right?

This is a really good argument for being able to use a computer and a tablet at the same time seeing the same thing on each. My distances are much shorter but only the computer can manage most fine details but the tablet can be in my hands while looking at the Glowforge. Currently you have to do the whole session in one or the other as they will each try to command (I think) and the whole thing crashes.

Maybe we can collab on some stuff for the SCA/Ren Faires. I keep coming up with ideas I want to try.

I managed the first Gulf Wars and several Pennsic including the 25th that was amazing. Not able to get about as much (was very painful even then) but the local matriarch of house Rolling Thunder lives down the street and still makes it to them all.

As she has a major merchant capability, I am working on ideas that she can bring there. Any ideas or collaboration would be amazing even if I cannot make it in person.