I’ve been asked to engrave a weavers’ guild logo on two shuttles. I did w/out a jig, but decided the angst factor was too much. 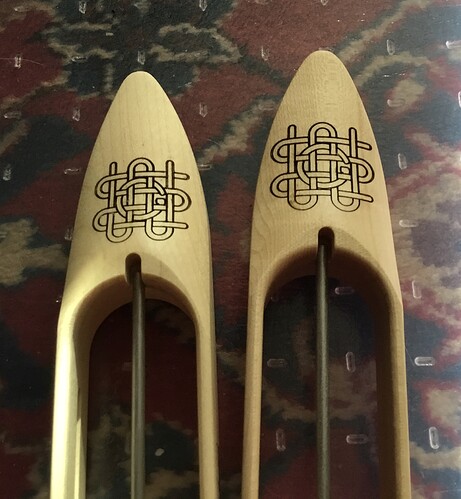 The cardboard from Chewy (pet supply company) is lovely to work with. I get two boxes every other month, so I’ve got plenty to use up. 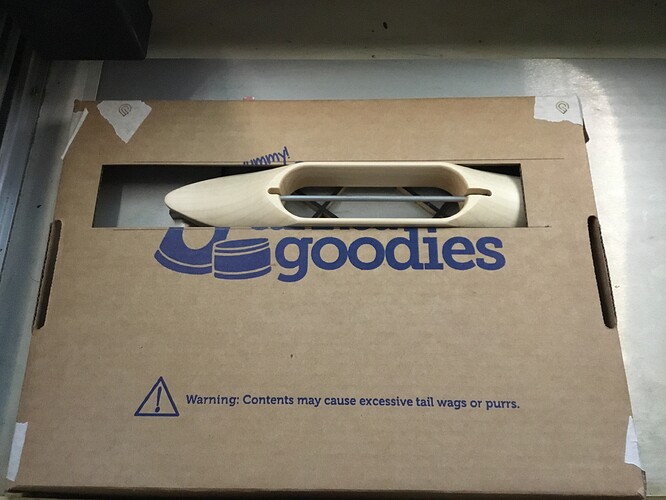 Snapmarks at the top ensure the files line up with the shuttle. I cut a hole in the box so it requires gentle pressure to fit the shuttle into, and keeps everything aligned. The logos need to sit in a clear spot on the nose of the shuttle, so I made non-printing alignment marks in the file to center the logos (future jobs will all be different logos). 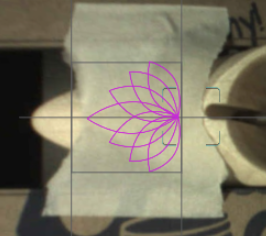 Looks so good! Their logo is really clever, too. Jigs to the rescue!..that, and Chewy boxes.

When the cat has excessive tail wags, is that a good thing? I love the shuttles btw and all the more that the designs look perfect.

I call it ‘dusting the furniture’.

Snapmarks at the top ensure the files line up with the shuttle.

Whatever happened with snapmarks anyway…I’ve heard that they were scrapped, or put on hold? I think I was late to that party and only people who HAD them can still use them?

I don’t know for sure. They disappeared on me one time; when they popped back in I didn’t use them for a while. Now I want to make lots of jigs.

They scrapped it almost 2 years ago now:

Snapmark work stopped Everything Else

In September, we created an experimental beta feature called “Snapmark”: We’ve reviewed a tremendous amount of helpful feedback. The three biggest things we heard were this. Snapmark is hard to use and only works under certain situations. Alignment is critically important, and should work all the time. Snapmarks are not a substitute for the pro passthrough software we’re developing. Based on your feedback, we’re going to stop the Snapmark experiment where it is (we won’t disable it for pe…

to focus on Camera Calibration for everyone, and Pro Passthrough for Pro users.

It was tied to experiments leading to passthrough, and I was using Snapmarks to the side of the work to assist that passthrough, though not very much.

I thought they pushed Snapmarks to Premium? I’ve had them since beta and am now Premium and still have them – actually the only reason I decided to commit to it! Anyone not have them that got them with Premium?

They only show up in there if you had them in beta. (I was late to the party, so no snapmarks for me…)