Kansas City had their Maker Faire June 23-24, 2018. I have participated in all 8 years with our Makerspace, C3KC (aka CCCKC), racing modified power wheels racers (PPPRS Series) which you may have seen at Bay Area, NYC, and more races across the country in Maker Faires. I was told by the founders that my car, Duct Tape & Zip Ties, is the oldest car in the series.

This year is the first time I missed races on Saturday in the 8 years we have been participating — because our booth was so busy because of the Glowforge! I didn’t even have a fancy big GF sign, people came looking for us because they heard/read (or read on this forum) that there was going to be a Glowforge there.

I’m afraid I don’t have a lot of pictures because we didn’t get on the other side of the booth very often. I will see if anyone else happened to get some pics, but will post what I have. Maker Faire outside on Sunday ended abruptly with a large, but not long, thunderstorm and winds. We luckily were prepared and had moved the Glowforge inside the tent enough that we were fine (although we tarped it right before the storm came through). They cancelled outside events because there was another storm predicted in less than 2 hours. We luckily were able to get everything packed up and the Glowforge safely home.

Here are some pictures we took during set up on Sunday ---- LOOK at how we accomplished venting away from the people visiting our booth — do you see the tall silver vent that goes above the tent? My fiance’, Philip, came up with that and we didn’t STINK — although the homemade kiln next to us did (major fire & smoke at times) — in the photo we are just setting up and didn’t have everything out yet. We had a 3D printed dice castle out with 3D printed dice that kept the kids amused while we talked to the adults…hee hee. Yes we could have done it all with a Glowforge, but with the weather delay, and an unplanned week away, it put us quite a bit behind on our plans.

I was pleasantly surprised at how many people came out just to see the Glowforge in person. I was so happy that the Glowforge was able to work due to our “mod”. The weather update — it was hotter than what the Glowforge likes to operate in (two weeks before Maker Faire our A/C went out and it would not operate in mid 80’s inside the house. A new unit was installed 3 days before Maker Faire set up.) My son bought a portable A/C unit when the A/C was out and we borrowed it for the event. All that was done was to turn on the mobile A/C unit, took a small piece of cardboard and bent it to direct the cold air into the intake — worked like a charm!

On Saturday we had children and adults decorate “wooden coins” and you can see that some really got creative with their artwork! We were originally going to let them decorate wood coasters but started figuring out how long it would take, and we were really glad we changed to the coin size tokens. These are just some of the coins from the Glowforge waiting for people to pick them back up. We had two TVs going with videos and information about the Glowforge.

We met several people that were on the community because one lady quoted something I said about the weather – I told her that was my post. She came out because she has a large (or I would consider large) Etsy store and wanted to see the Glowforge in person. She asked a lot of questions about my experience with the Glowforge and I asked her about Etsy — she thinks I should get a store – we’ll see… I need to get a wedding planned first and Glowforge is my new wedding planner, er creator, er assistant…hmmm a big part of the plans. LOL

I had a great time — I never thought something would pull me away from my Power Wheels (PPPRS) Racing — but I really enjoyed talking about the Glowforge. I learned quite a bit and hope to be more prepared next year. I want to thank Marion, @marmak3261, for all his insight and encouragement that helped me so much! 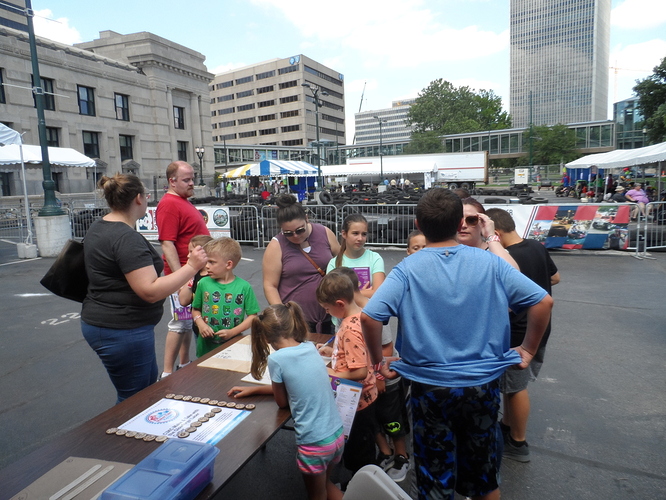 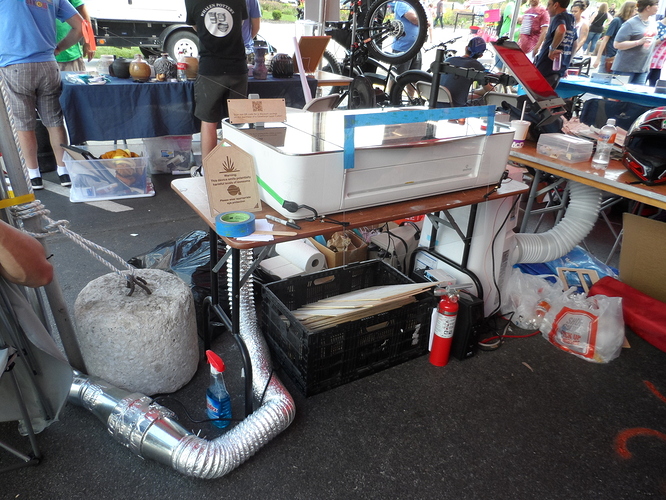 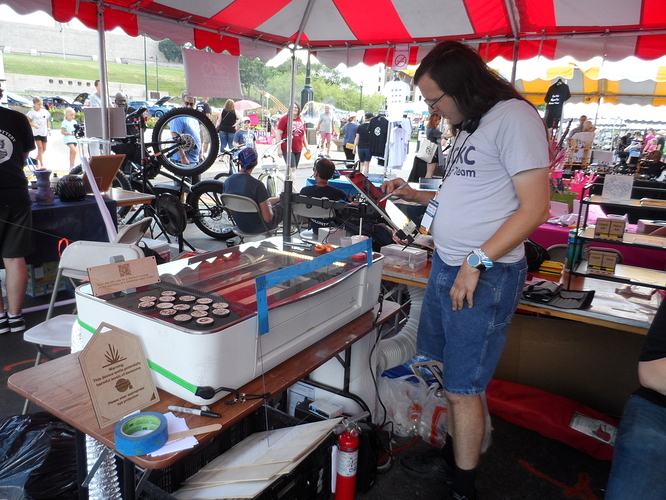 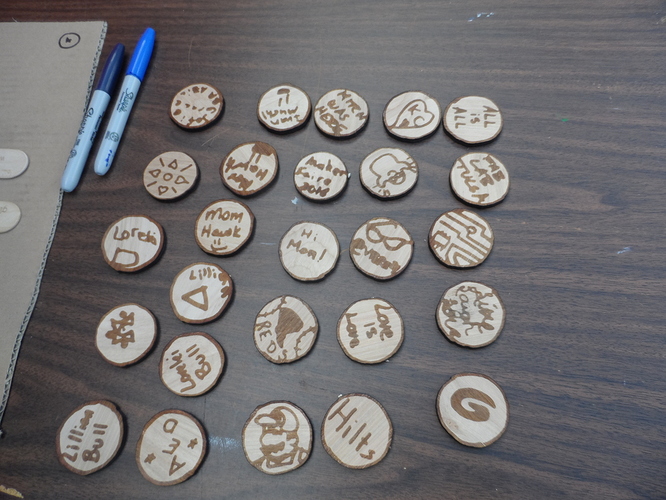 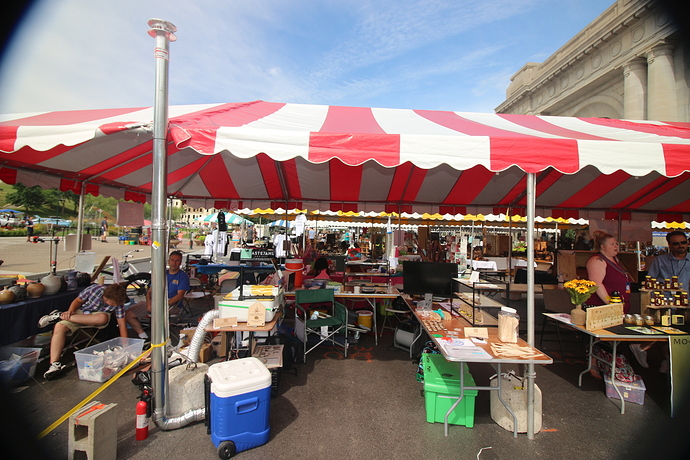 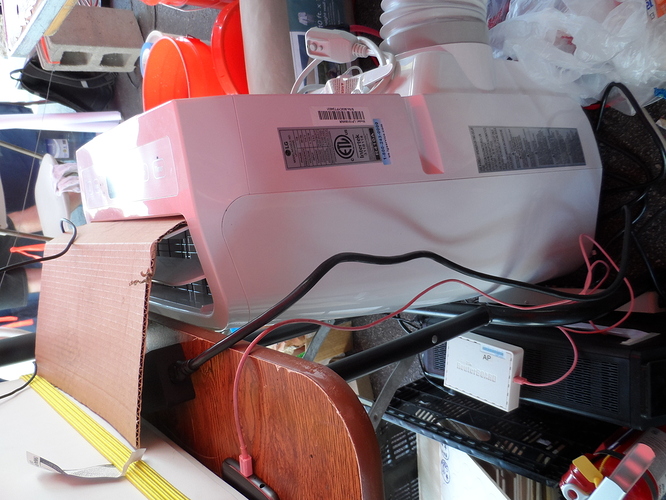 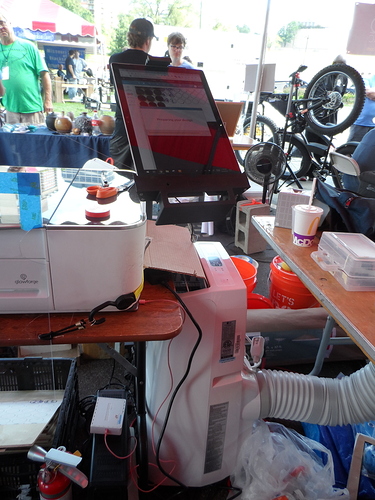 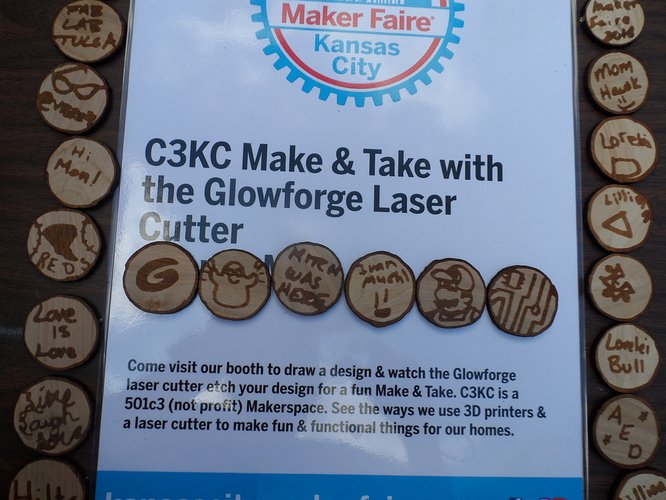 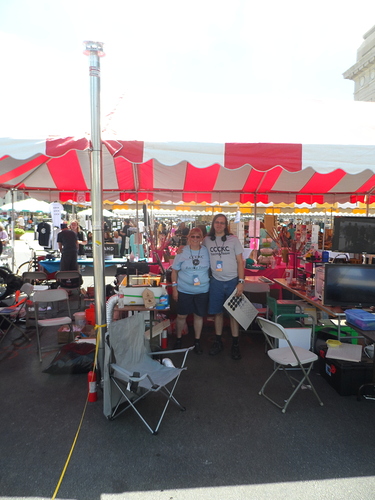 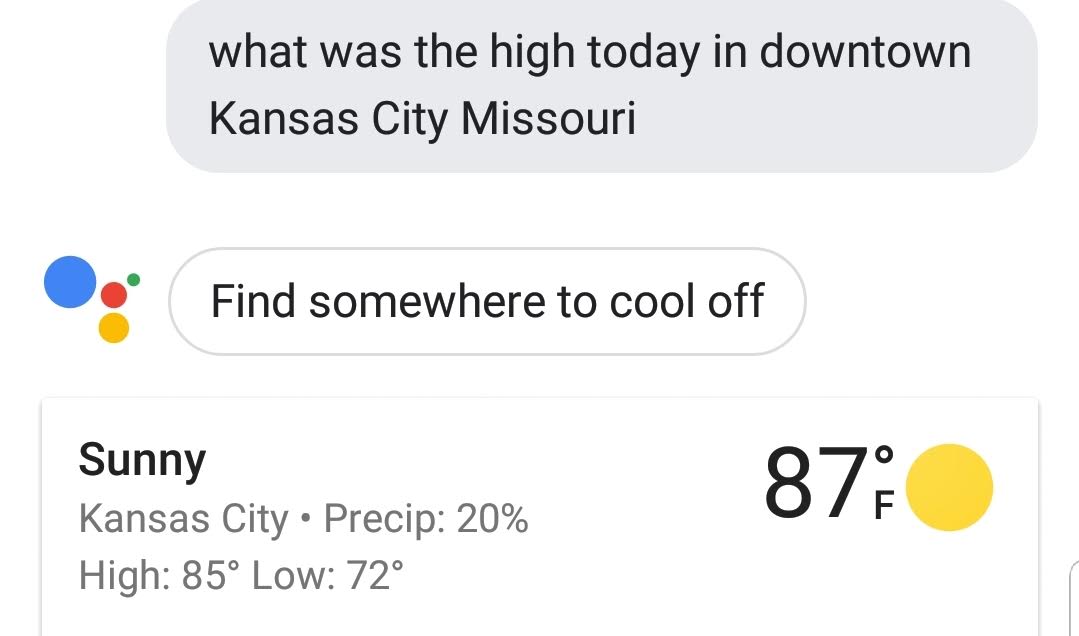 That sounds great. FYI - I don’t see a picture.

I’m sure people would be very interested in how it performed in the heat as well - and any steps you took to keep it cool.

I just updated — I disappeared for a bit unpacking to find the two cameras that we were taking pictures on (I forgot my Canon DSLR on Saturday — GASP! I have never done that before!)

Ok reread my post and left a few things off:

Great job and clever use of the stand and “enthusiast blocker devices”.

I’m so glad you had a successful Maker Faire! I know you were worried about the temps—the portable AC seems to have provided a perfect solution. The enthusiasm of the crowd is fun to see.

Great to see the pictures and your write-up. What a great name “make and take”! So glad you were able to get a cooling setup. Very clever. Venting and everything! Maybe next year I can join you. I’ll try not to book any weddings!

I hope you get some referrals out of this.

Thanks for sharing your solutions and the great experience!
We’re you running the 'forge and the air conditioner on the same circuit?

Would it help if we booked a wedding then — but in KC at Maker Faire? Just kidding – but would assure your presence.

Would really be nice — I would love to hit enough referrals that our Makerspace could get a Glowforge – I think it would really help to gain interest in our group!

You are most welcome! Everyone here is always so willing to share — glad I finally could contribute. The A/C unit came as a by product of our A/C at home going out the week before Maker Faire and having unbearable heat and humidity in the house. After the new A/C was installed just a few days before Maker Faire — seemed like a sign it was meant to be. ;0(

Yes we were …AND…the GF was plugged into a UPS “just in case” all on the same circuit.

If this is what your machine’s name references, you are definitely a nerd!

Yep. Wonder how long it will be before fiance’ discovers the GF has been renamed. The joke goes back to 2013 when I started my degree in networking communications management…as I was deep in studying in my first semester, he told me I needed to make sure I memorized the most important RFCs…and this was the one he introduced first.

My next laser cutter (thinking ahead here), I should be a lot better with Illustrator by then … And hope to have the “subject matter” graphically designed (if not, at least a project configured) for RFC2795 and name my device that. I can already visualize the logo and the 3D subjects hanging around the studio…

I can even print more of these (see pic attached) to let their food source relax until being devoured…(just made as joke for co-worker this week as others were buying him bunches of the bananas as a joke for his birthday)…he loved it. 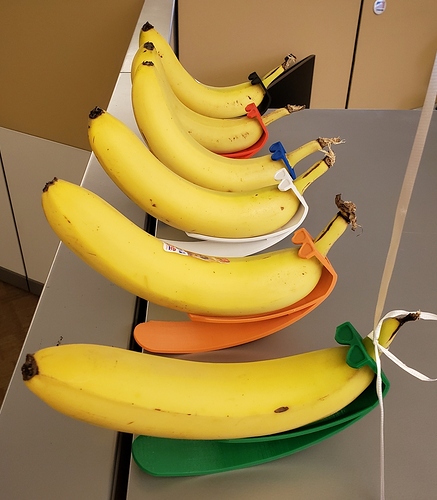 LOL capes with sunglasses/masks. They are called banana loungers — one of my friends called them banana hammocks.

They were the sweetest bananas (a few others mentioned that at work too) and wonder if the hammocks/loungers/super hero capes had any effect on that.

Isn’t that a Speedo?

That is beyond cute!

You all make me laugh — never fails. I like that.