7.62 ammo can but decorated pretty much all with the GF. Acrylic for the chevrons (The service that offers overnight letter delivery to soldiers in-training uses envelopes likes old-fashioned air-mail, with the red and blue chevrons around the edges.) The logo on the side was her battalion at BCT - “Rough Riders” (I think I used 5/32 PureBond ply for that.) Wording is draftboard - still undecided on whether to color that. The Army “stamp” is acrylic, engraved and filled. The other postmark “stamp” was just engraved from drafboard, took a few tries to get it to look decent,

Drove myself nuts over getting the chevrons to stick to the painted surface of the can. In the end, just decided it will look fine, no need to stress over it, and used a healthy amount of goop. Looks awful as a maker, if you zoom in, but looks just perfectly fine on a table from a few feet away. 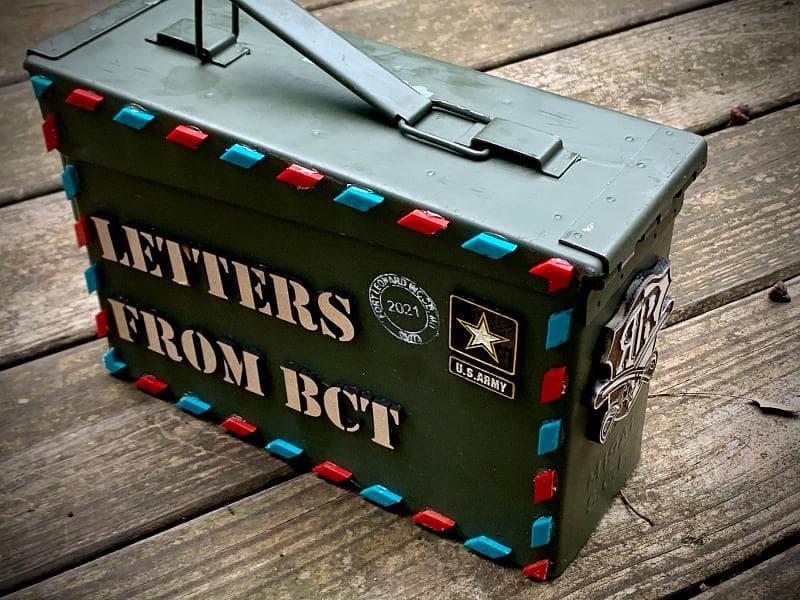 This looks great. My daughter used one of these for my grandson’s first birthday. We all wrote what we thought he would do as an adult and she’s going to have him open it when he’s 18 and see where’s he’s at:-)

Wow! Looks great and is definitely something to treasure. Also, you must’ve wrote her a lot. I got one letter from my father the entire time I was away, and it was near the end of training.

So my one letter in that box would’ve been a super funny and depressing reminder.

If you didn’t send her a lot of letters, make sure you stuff it full of candy and nice notes, then tell her you were afraid it would’ve been confiscated as contraband

Her mom and I wrote every day, she only had access to her phone for 15-30min on Sundays - and that was more than many others who often had that privilege revoked, due to “disciplinary” issues within the platoon. One entire company @ JBSA has been severely punished due to “things that transpired” over labor-day weekend. A close friend that enlisted at the same time (but went off to a different location, different MOS) didn’t get his phone for a month. He didn’t write either - boys.

The Sandboxx service provided pre-paid stationary for her to write back as well, and she wrote back most days herself. We have quite a collection of memories to stuff in there.

Sporting her Army Achievement Medal for top physical performance before graduation. She does “tough mudder” competitions for fun, scored third overall (women) in her first against professionals while in high-school. 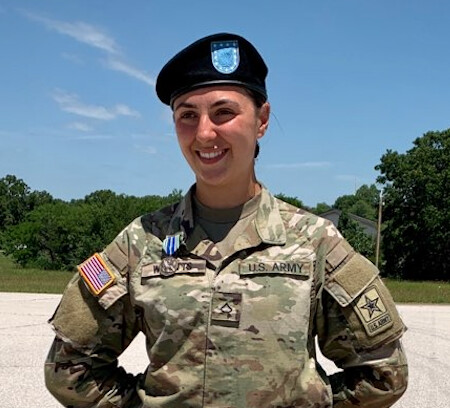 (also scored expert in marksmanship - 39/40. Top in her class, but no ribbon or medal for that.)

But she can be a sniper though. I think the requirement for that was 38/40.

Combat medic. It’ll be official tomorrow - although graduation is a couple more weeks away.

Awesome box! Did you try E6000 for those acrylic bits? I think it works pretty well for jobs like this.

She sounds like an outstanding person, you must be so proud of her.

I’ve used both goop and e6000 for years. In my experience they are pretty much the same BUT when I got to the lettering, I did end up breaking open a fresh tube of e6000 because it is admittedly thinner and easier to apply to the tiny parts on some of the letters.

when i was in BCT, if it wasn’t issued or approved, we weren’t allowed to have it. I am assuming the BCTmeans Basic Combat Training. and definitely no food or candy because it would draw vermin (and i don’t mean my fellow soldiers).

Pretty much. She gets protein bars at the PX, and is allowed a powder plus supplements that I sent. Privileges are earned as they “phase up” in AIT based on GPA, but with the virus, a lot of it amounts to nothing but a new badge - no off-base passes, which has really hurt morale. She loves San Antonio and was looking forward to exploring it while there. The ones that have phased up can wear civvies on personal time, but the DFAC is almost 2 miles from barracks, so most kids don’t even go back out for dinner given the heat and how exhausted they are - plus they have to move in groups of 4 or more which makes it even more challenging.

She called her mom and me for over an hour again last night. Her final test-out is now Friday.

Please thank her for her service for us.

An excellent idea! I love it!

Useless Trivia: Marksmanship is just one of many skills needed to apply to any sniper school. If you’re accepted, the cadre has to ‘deprogram’ all of your shooting habits and rebuild your skillset into something more useful. Then you have to survive the training and graduate.

Good on her! Combat Medic is no joke.

Lmao. My shooting skills were average. All I know about becoming a sniper was that only one person shot what was needed to even be considered when I went and so it was mentioned in passing.

I know it wasn’t directed at me but my daughter has no desire to be a sniper. We do, however, compete locally. Pistols (USPSA) since she was in high school, rifles (100yd iron-sight 3-position) more recently. She can shoot the pants off me.

Her orders have her as an EMT, assigned to an ambulance. With Covid and the situation in LA/MS right now, we are prepared for change. Guard has been deployed to assist both.

22 years in the army and I went to the range during basic training. Then 10 rounds to zero and one magazine to familiarize when stationed in Germany, then my reserve unit went out and I fired a .38 snub nose and a .45 cal grease gun. Then once in officer basic course. All told I bet less than 500 rounds down range.

OK that’s cool. I’m sure if you had the postmark stamp you could find other things that needed postmarks… I get it though; that rubber is pricy.

I have to admit, though, I’ve used needing things for a single use in a project as an excuse to purchase all manner of tools and toys.

She got a second Army Achievement Medal for academic performance in AIT. She missed honor grad by 0.1%. She was top in marksmanship.

She was one of five out of 244 who received medals. It was pinned by the adjunct general for the state. They don’t hand these things out like candy.

At the hand-off ceremony a couple of weeks ago, she had senior officers from 4 other units coming up trying to solicit her to join them, one here in Marietta where we live. She’s assigned a top medical facility on the east coast down in Macon, and will be working in a hospital. She may get assigned to Aus or Georgia (EU) next year.