Guinea keets have to be kept at 95ºF for their first weeks, until they have enough feathers to keep themselves warm. For the first few days you can keep them indoors without too much work, but after that they get annoyingly stinky and you spend all your time cleaning up after them. Fortunately, here in south-central Texas, 95º is pretty simple to accomplish outdoors, and I also had the motivation of teaching our 5 dogs to leave them alone before they’re old enough to be released.

So a few days ago I moved them outside, using an old cage I found down at the “wild” end of the house, a cardboard box, and a heat lamp and extension cord for the “low” nighttime temps when it drops 'way down into the high 70s.

The dogs have been doing a pretty good job of learning to ignore them, and the keets are having a good old time eating new stuff like worms and chickweed from the garden, and the house doesn’t smell like keet poop. Win-win!

So naturally, now that I have them all settled in (and in the process put my back out hauling dirt to fill in the bottom of the cage so they don’t break any legs), our endlessly hot and sunny weather is coming to an abrupt end later today, and the forecast for the foreseeable future is filled with rain, rain, and more rain. Oops.

So, as usual, Glowforge to the rescue! Late last night I threw together a wooden “house” to replace the cardboard, and hastily gave it several coats of tung oil to get it through the few weeks left until they won’t need it any more. That and a tarp should get them through the rainy period – now I just need to construct a feeder to keep their food dry, and we’ll be all set. 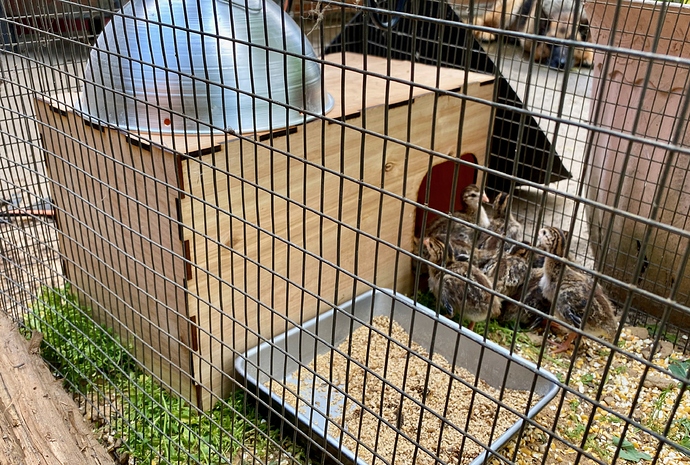 i see one face that is studiously not ignoring…

Well, she’s not trying to tunnel into the cage, so there’s that.

The worst one is River, the 4 lb wonder. My last hope, if I can’t get her to stop thinking they’re squeaky toys, is that they’ll probably be bigger than she is by the time they’re ready to release!

you just brought two more monsters into her life. she has to assert dominance over something!

Ha! She asserts dominance over EVERYTHING!

I presume that there is a hole under the dome, a tarp tied down over all, and care that all is the highest ground so the chicks don’t think they are in Michigan

Very cool. I only wish they would let us do that here.

I see they also attract flies

I haven’t noticed flies around them. Are you seeing the larvae I dropped in their food dish? Those are from the compost bin.

No there is a big fly on the wire cage left side on level with heat lamp.

Ah, now I see it. It’s just there, nothing to do with the guineas. Central Texas has a VERY high bugs per square foot ratio. Pretty much any photo I take of anything is pretty likely to have at least one fly in it somewhere.

Well done! They are lucky to have you as their caretaker!