Thanks for the information folks! This is a great help.

The Masonite I saw at the store was the type that was flat on both sides. I thought it would be great for doing small projects. Maybe I’ll pick up a piece and see how it holds up to just cutting and leaving around in the shop before I subject it to lasering

Thanks for that reference! That glue info makes a big difference in sourcing and the questions I’m going to ask to my vendors!

I hate that stuff! It will kill your back

As @spike says, it varies tremendously by supplier. I bought some 0.2" MDF on sale two years ago that I couldn’t cut through - gave it to a friend with a 100w laser and he still couldn’t blast through it, no matter what the speed.

Other MDF and HDF cuts fine (although check the MSDS because the glue may be hazardous). Just depends on the supplier.

Worth noting that UK spec MDF contains some pretty nasty stuff including Formaldehyde.
I won’t have it in the house as it does tend to off-gas, even at RTP, so I certainly won’t be cutting it.

I saw at my local big-box store that they had some 4’x8’ sheets of 1/8" and 1/4" hardboard made by Georgia Pacific (the untempered variety which is what I understand a 40W laser could cut). I contacted them to find out if they used any adhesive’s during the process and this is the response I received. 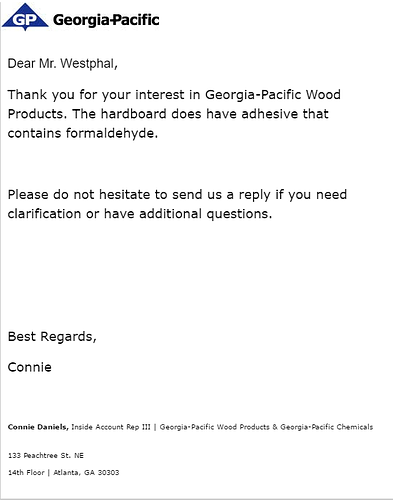 Thanks for doing the research and posting the results!
With proper precautions (i.e. wear an organic vapor respirator, and use a filter on the exhaust) it should still be possible to cut safely. Better to avoid it if possible, but I think most press board/masonite is made with a Formaldehyde based glue. I know I can smell it when cutting the stuff with my table saw.

In the pics of my shop, the bench in the center of the room and the jewelers bench is 3", and the other tops are 3/4" of a product called Benolex. That 3" bench top weighs at least 300lbs.

The 3" stuff was used as a mount for large diesel engines in production facilities.
Heavy as stone, and hard to cut. That half circle cut out on the jewelers bench took me a Saturday afternoon with a jigsaw.
The smell is unmistakably Masonite.
When you could get it, it was very expensive.

For the 1/8" thicknesses of masonite, hard to find a tougher stronger wood source material.
@jkopel, I didn’t know that smell was formaldehyde

I have heard that it is not such a big deal in small quantities. I got somewhat sensitized working as a formica installer trimming with a router all day long. I still use masonite, but I wear an organic vapor respirator and that makes a big difference.

I guess I’m not surprised that is a constituent of Formica, stuff is hard, and the color is right. I have wondered about that material’s compatibility with a laser, cuz I got me some!

I’m replying to my own post because I didn’t want this to get lost in an edit, but I may still cut the untempered hardboard and use it as a pattern. I’ve heard that putting super glue on the edge makes it harder like tempered hardboard and thus more durable…and it soaks in so as not to add material to the pattern profile.

Using hardeners is a good point to make. Bookmarking for further investigation.

I have used this stuff on rotten wood and plain old paper.
http://www.jamestowndistributors.com/userportal/show_product.do?pid=2093&familyName=Boatlife+GIT-Rot&history=&engine=adwords!6456&keyword=git+rot&match_type=

It is amazing, but also expensive. I know there are cheaper one part products (minwax makes one) but I have never tried them.

I’ve used the one-part hardeners, and they sorta work. But they have to be really thin to soak in, so any seriously soft/rotten wood (like the bottoms of our doorframes will soak up pints of the stuff. Superglue probably fine for this application.

I used the Lowe’s hardboard on a couple of laser-cutter projects at TechShop (RIP!). It’s super-cheap, making it terrific drafting material. The surface is really smooth, and the mottled appearance has some appeal, so it might even be suitable for certain finished applications.

– The back of the panel is rough, about like burlap. After all, this stuff is meant to be glued to walls, and the roughness helps the glue grip. (If a product description says “smooth on both sides”, DON’T BELIEVE IT! Or, at least, don’t expect both sides to be finished-quality smooth.) I tried making a few double-sided things by gluing pieces back-to-back, but the roughness made for a terribly-unsubtle middle “seam”. Sanding might’ve helped (that would’ve been more trouble than my experiment was worth), but I’m not sure how well hardboard holds up to that.

– You need someone to cut those 4’x8’ panels into manageable size. My Lowe’s charges to do more than about two cuts; moreover, their giant panel cutter is hardly a precision instrument, so the end results tend to be far from uniform or square. (You can buy small-size hardboard panels at art stores —painters use them as canvases— but the price goes up.)

I use them for quick knock together stuff - it’s about $8 for a 4x8 sheet at my Home Depot and they have the same 2 cuts for free but if it’s not busy they’ll rip it down further and they don’t charge me for it. Depending on the car I have with me I usually get it down to 2x2 square and then break it down smaller at home. I’ve used it for street art stencils in longer panels using the pass through. It’s easy to cut and the shiny side is easy clean up (relatively speaking) for paint overspray.