I was trying to laser my name and phone number inside the temples of some RayBan sunglasses. Since the frame is slightly curved, the thickness of the material is…immaterial. The engraving was shifted too far over as the laser met the curvature (I suppose), and the job got screwed up.

I’ve seen references to using “unfocused” laser settings. Would that work for my situation? If so, how do you do that?

It’s not so much about the focus as about the material height (and the conflict between the actual height and the height that the GFUI believes in for purposes of showing you where the zapping is going to go.)

Often the easiest way to deal with this is to set up a piece of cardboard or other sacrificial material the same thickness and curvature as your final piece and then do a low-power test run to see where the engrave will actually go. Then adjust the position of your final piece or of your engrave to get things right.

Sometimes it also helps to have the outline of the piece-to-be-engraved as part of your test engrave. Make it a different color from the rest of the image so that you can set it to “ignore” for the real engraving run.

You might also consider the chemicals in the plastics - not necessarily laser safe and potentially dangerous!

Thanks you for the suggestion, but I’m not sure how I’d go about setting up an accurate enough test piece to replicate the curve of what I’m lasering. A similar scenario to mine is engraving on a glass or on the back of a wooden spoon. Seems like a lot of work to go through to engrave on these types of curves. There’s got to be an easier way.

I’ve engraved on eggs (very uneven curved surface) and grains of rice (even more curved surface) and the secret to getting a good text engrave on anything, since text is perfectly horizontal, is to make sure that the item you are engraving on is completely square to the laser head.

I cut a collection of spacer sticks that butt up against the front of the machine, and align whatever I’m engraving against one and tape it in place. Then size the text to fit on it.

It’s not 100%, but it does cut down on a lot of errors introduced by having the item canted on the tray.

(Might work in this case too - the laser is going to engrave straight down, as long as the object is square, you’ve got a better chance that the text will stay on the object)

The thickness of the material is absolutely critical for placement though. Use an average thickness number, and be sure to enter that into the Unknown Materials slot, or it can miss the item completely.

Jules, do you happen to have a photo illustrating what you’re describing? I’m not quite picturing what you’re saying. If you’re able to engrave on a grain of rice (let alone an eggshell), I think you’ve figured this out.

Yeah, hang on a second, I’ll have to fire up the machine again to do a screen capture…

Okay, here you go - I use a couple of cuts that I know are square, butt them up level against the front of the machine, and then I’m sure that the little item I’m working on is square. (And also closer to the center, which helps with placement.) 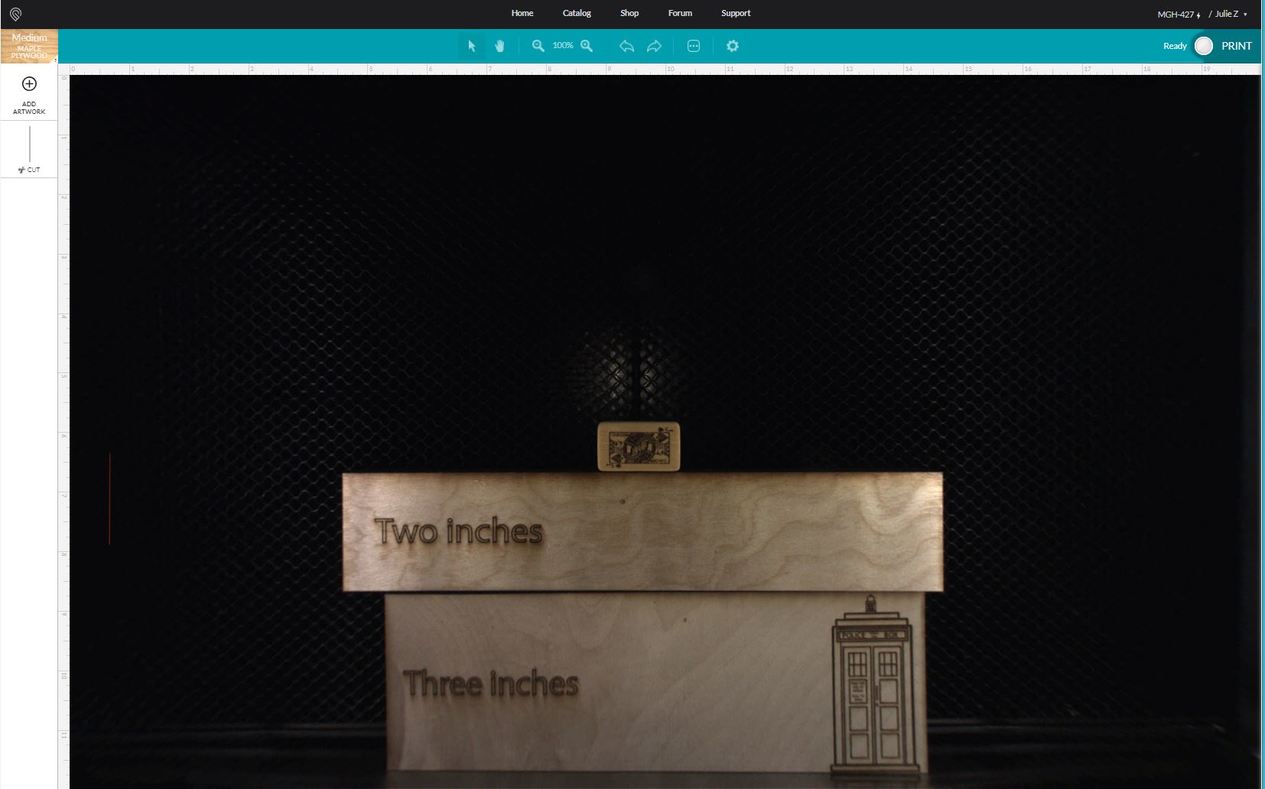 The little bamboo bead shown has a slightly curved surface and it engraved just fine.

It was a test on scrap, and I just hung on to it.

I’m still not getting it. Not to oversimplify what you’re saying and showing, but I don’t understand why you need to square up curved material relative to the front of the machine when the laser is coming from the top of the material. I’m obviously missing something here. 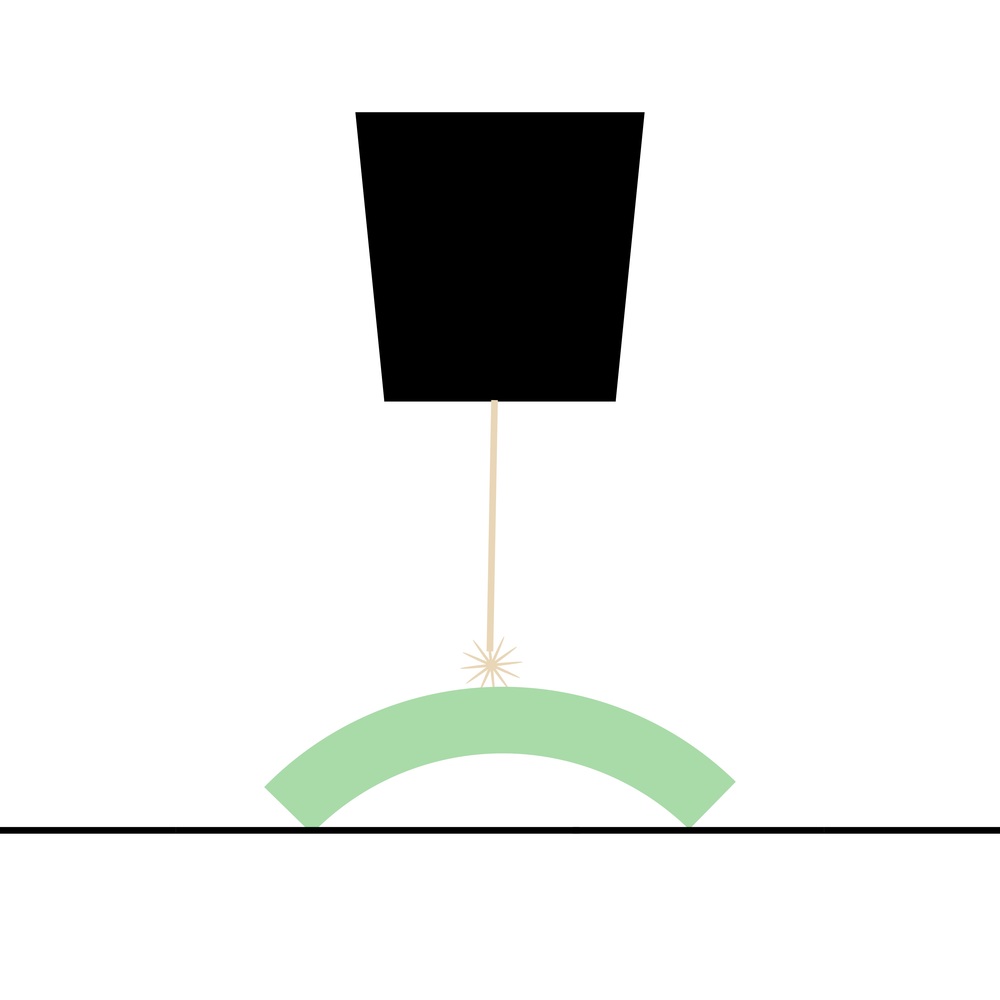 I love that my TARDIS from back in… what… July? is in this post.

The laser can deal with a fair amount of curvature actually. What throws it off is the placement, and that is tied to getting the thickness of the material correctly entered into the Unknown Materials slot.

Did you enter a thickness there? (Measure the thickest part of the eyeglasses stem where you are going to add the text, at the center, and enter that into the slot. Then place the engraving, keeping everything horizontally aligned. The text is always horizontal unless you rotated it for some reason, so you are actually aligning the glasses to the text.)

I’m probably not explaining it well, but the laser will adjust slightly for depth changes - it handles warped material, and cuts that fall down as a result, without distorting the image you are making.

love that my TARDIS from back in… what… July? is in this post.

Yep, that’s the one!

My blocks are all sporting 3D texture tests. Damn fancy blocks of wood! Nice functional art.
That front door is a good benchmark for parallel to the gantry.

the laser will adjust slightly for depth changes

I don’t think this feature is implemented yet.

I don’t think this feature is implemented yet.

A bazillion years ago in PRU days I had a cut that appeared to compensate for depth issues, but @Dan confirmed they just made the system very resilient to variable depth as it was not implemented as you note.