I’ll install a video system in it next, that’s what the thing at the front is for, the camera. But I didn’t want to waste time with that if it wouldn’t fly. Which it does! 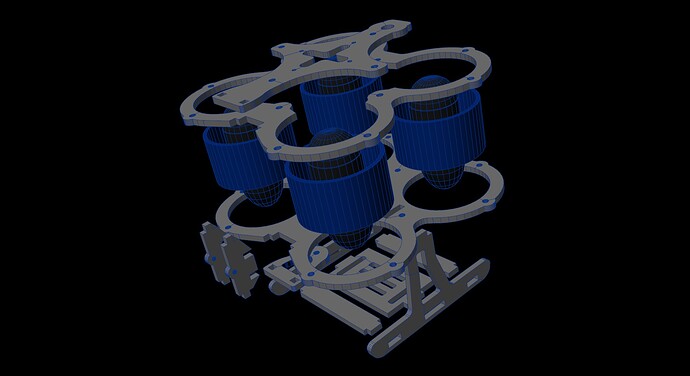 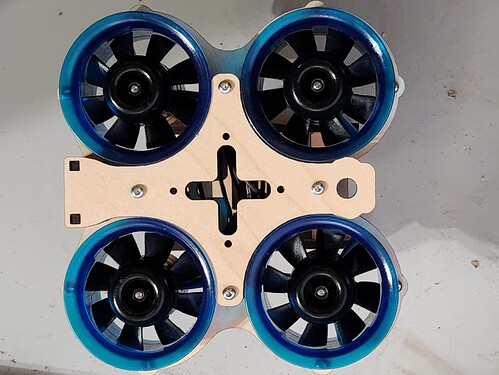 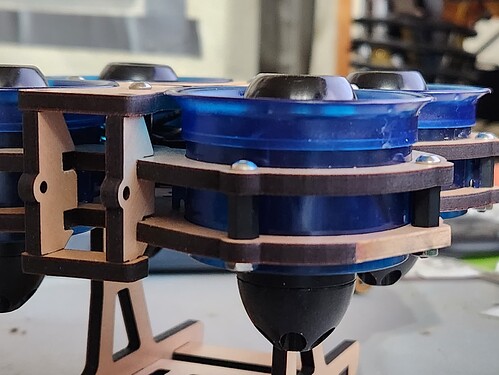 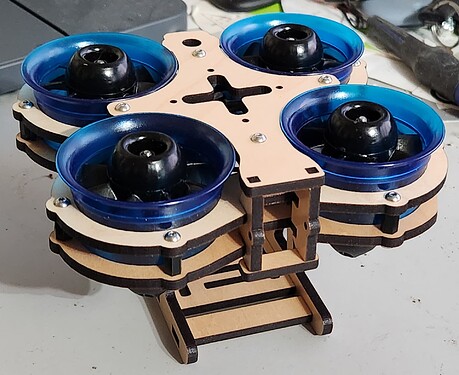 Iflight was new to me, so I went to look at their site. Looks like really nice ESC and FC, but it comes at a cost. Do you think it’s worth the premium?

Ducted fan drones often have a problem with absolute maximum forward speed, the Coanda effect causes it to pitch up as you increase velocity and you lose forward thrust. Does the FC have software to help compensate for that or is it just a gain thing that you can configure? You looked like you got pretty good performance either way.

Any design issues along the way? Any dead ends you ran into? Any things you’d like to improve?

Got any idea about flight time with this setup?

That’s pretty darn cool! Next thing we hear, you’ll have built something that goes into orbit.

Nice fall foliage in your area by the way.

I like the iFlight FCs for one major reason - they’re harder than hell to solder to. They are that way because they have an extra thick copper layer to help with convective cooling. It also makes the boards stiffer and less likely to pop off a component in a hard crash (if you did high speed video of a PCB when a strong mechanical shock is applied, you’d see it ripple). They’re also only one of a few offering an AIO for 2-6S rated at 55A. I favor their AIO FCs for high power use cases.

The FC should compensate for any aerodynamic effect in forward flight. The problem you get is at the end of that forward flight, when you transition in to slow flight or a tight turn. Then, the dynamics change very rapidly and the FC may not be able to handle it. I have a quad design from a couple of years ago called a “Big Whoop”, since that’s basically what it was, I simply could not tune to prevent it from going unstable as it slowed from high speed. As soon as pitch came up even a little, the quad wanted to flip. But that was shrouded props. I’m hoping this design which is using an actual EDF will not suffer a similar malady. For today’s 1st ever test hop it did not exhibit any unexpected behavior. I had a little trouble getting used to the throttle, but that was it. And its flight dynamics are much different from a regular quad. It’s outrageously heavy for its size, and the EDFs don’t really coast. When you reduce throttle the quad’s response is immediate, it drops like a rock. I’m used to some lag…

Big Whoop (laser cut Delrin with 3D printed ducts. This was the final version with the shortest ducts. Reducing the duct length seemed to help but it couldn’t be cured :

My first two revisions were in clear Acrylic. Looked great. Too heavy. I decided to redo it with Maple Ply (because I had some, and Cherry didn’t seem “right”), but also realized I could take a bunch of weight out of it by changing the method I was using to hold the fans. My original design used 3 stacked pieces with the fan going through them all. It captured the fan’s mounting tabs between them. I realized I could use just two pieces with standoffs between them to spread them out, and still capture the tabs between them. By happy coincidence, the height of those tabs is 8mm and I had a bunch of M2.5 8mm Nylon standoffs, so it sort of “designed itself”. 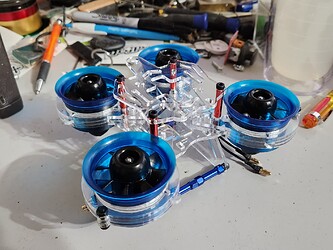 I also made the fatal assumption that the medium Acrylic and Medium Maple Ply were the same thickness. So I made one set of Maple parts that didn’t fit together. Duh.

I wanted it to be as small as possible. But with the Whoop FC mounted at 45º, I can’t get a USB connector on. I have to take the quad apart and pop one of the motors out to make a connection. I could make the quad slightly larger (5mm would do it), or maybe find a FC with the connector in a different place. That’s about the only thing I need to consider changing if I make another.

I wasn’t sure it’d fly that well. Now I see that it flies fine, I might tweak things for carbon fiber and pay someone to carve the parts for me. I have CNC, but no dust collection, so I can’t cut CF safely myself.

I hovered and flew slowly around my yard for about 6 minutes on a 1350 HV 4S pack.

I’m not really a multi rotor type but the EDFs make this too cool.

You just want to play while you rake leaves!

Seriously though, that is really cool!

It’s totally not a practical design. It’s going to blow to smithereens the first time I crash it hard, and it’ll bust up the EDFs when it does, and that’ll be the end of it (because the EDFs aren’t all that inexpensive even coming from a no-name China manufacturer). But it scratches my “what if?” itch. You never see any EDF quads. Part of that is the cost, part is the fact that you need clockwise and counterclockwise rotating fans and few can be had in complimentary pairs, part of it might be that they don’t fly well. So I decided to find out for myself.

Because it’s not in the least bit survivable, it’s no good for racing. But it should be exceptionally fast so I’m hopeful that if I just buzz around the club field, keeping the copter “a few mistakes high”, it might last more than just a week.

Looks like a lot of fun. Loved seeing the leaves whirl.

That is fantastic. I wonder if you could add a speaker and circuitry to produce a counter sound wave to make it virtually silent?

One of the design objectives was to make it loud. I have other copters that are much, much quieter.

That is totally awesome!!

Love this build. My first DIY drone was a Y-Six from MultiWiiCopter probably like 10 years ago. After getting a DJI drone, I abandoned making my own. I was a bit disappointed they never released the plans for the quad that Glowforge used in their early marketing campaign, but always thought I’d design my own. Your build is awesome and shows how a laser can help bring new things to life. Love that it flies, and looks pretty quick. Thanks for the write up and video.

Had to re-cut everything because the pocket for the camera wasn’t deep enough to let the camera tilt (it needs to be pointed up slightly, so when the quad it pitched forward in flight the camera isn’t pointing at the ground). “Blinged” it up a bit in the process.

This project is now officially completed! 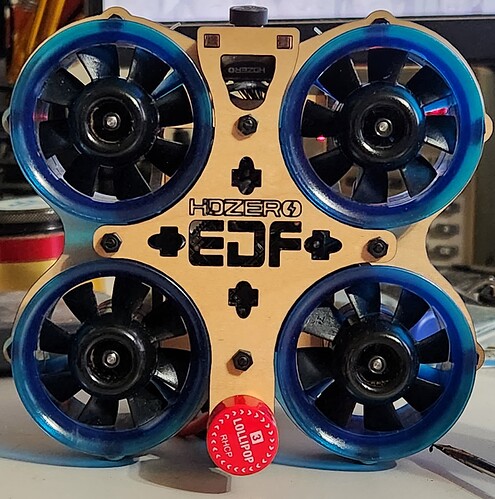 I had to do one more iteration to make it a bit wider. The landing gear and battery (which are on the underside) were blocking about 1/3rd of the exhaust of the fans. Spreading things out by another 20mm fixes that problem. Should fly a little more efficiently now. I did a test on the previous version and it was pulling almost 60A from the battery, which is a lot even for a wall socket. Will test out the new version tomorrow night at our weekly indoor FPV racing session. I will not be racing this, though. It weighs about 8x more than the class of quad copter we fly indoors. 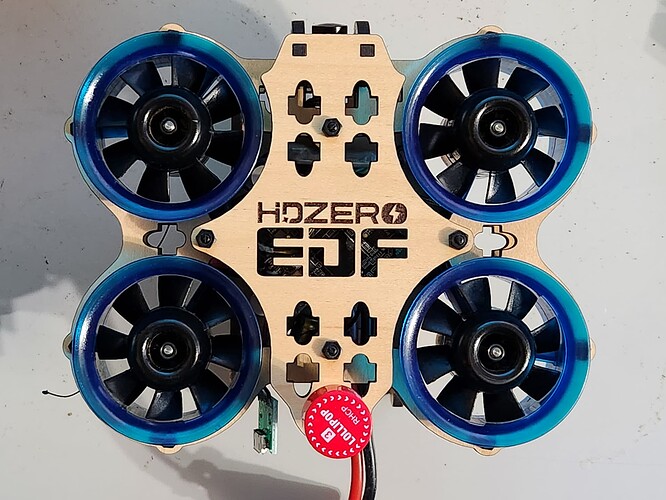 Wow, that’s something! You just need some space graphics in the back and you’d feel like you were in a Star Wars movie!