It’s been a while since I posted in here, I didn’t laser much in the beginning of the year, but I’m starting to complete and finish more things lately. Here are some of my latest projects, mostly Montessori based, and mostly for my youngest who’s into all things letters and numbers lately.

First are the sandpaper numbers, letters, and phonograms. These are great for finger tracing and getting the right muscle memory for future writing. We’ve used the phonograms the most as the youngest knows most of her numbers and letter sounds but is still fuzzy on some of the vowel teams and other letter combinations. I like the engraved ones, but those take SO LONG on my machine, so most of our sets use the sandpaper. I backed some 220 grit sandpaper sheets with 3M tape, cut the letters out, and then applied them to the already painted tablets. They’ve held up very well so far, no peeling of the sandpaper at all. 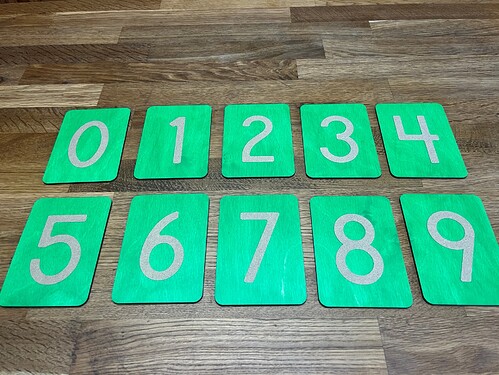 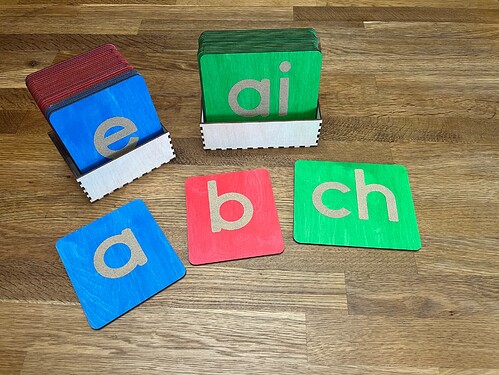 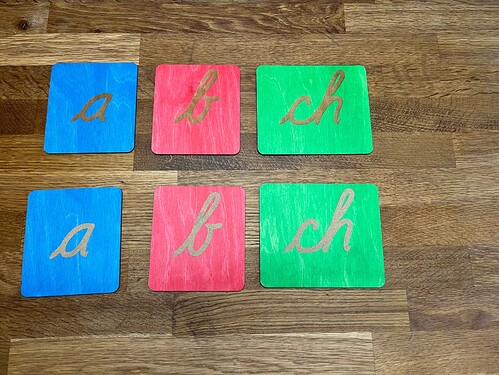 I already had a movable alphabet in print, so next I made one in cursive, which was a little trickier. The only way to fit all the letters into a GF bed-sized box was to slant the dividers. I had to make the slots and tabs wider than the actual material thickness to account for the angle and I ended up gluing the dividers into the box (which I don’t normally do) because there was a bit extra play in the box. But other than that, it came together so well. I love how the vertical slant of the dividers mimic the slant of the cursive letters, they complement each other so well. 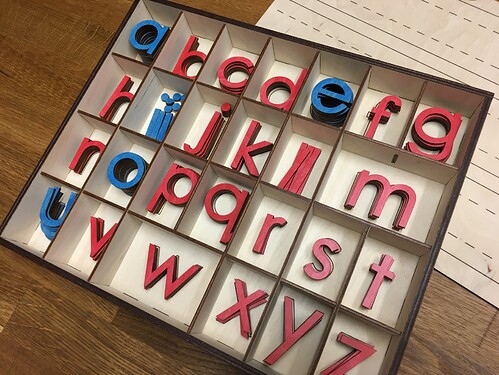 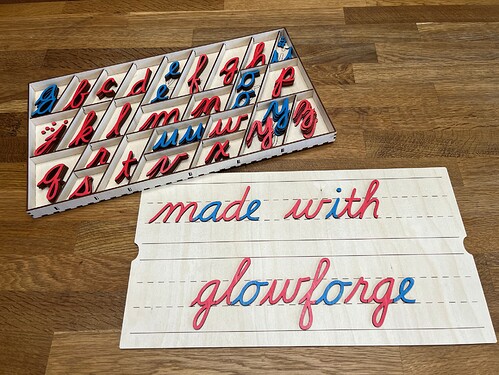 Next up is numbers. I made some numbers and round counters with a simple divided box and integrated ten frame on the lid. She’s pretty good with counting, but sometimes she counts too fast and gets mixed up, so I’m hoping the counters help her slow down and correlate one number with one counter. The ten frame is also useful for practicing subitizing and recognizing different visual arrangements of number groupings. 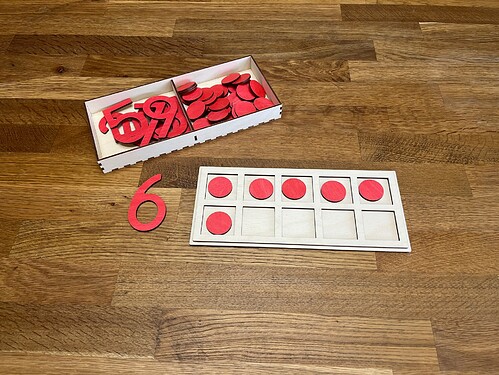 Last up is the classic Montessori spindle box. Again, to help counting and correlating discrete quantities with their numeric symbols. We don’t have the ‘old school’ spindles, but regular round dowels work just fine for us. It was a pretty simple build, just a divided box with slanted sides. 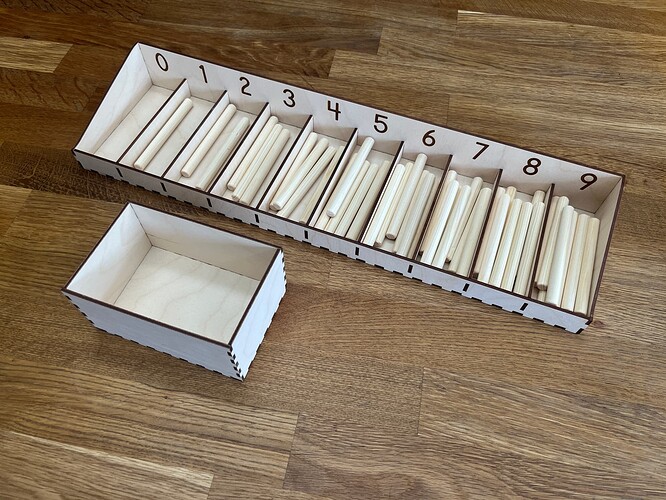 Now I need to make some things for my oldest, he’s been feeling a bit left out lately!

Excellent use of the Glowforge!

Clever sandpaper trick. I’d guess it would work with any paper, like heavy cardstock, chipboard, etc?

These are really amazing. Great stuff!

I’d guess it would work with any paper, like heavy cardstock, chipboard, etc?

Yea, that’s an interesting idea, I don’t see why not. I used sandpaper for the tactile effect, but I suppose other paper-like materials could be used as well.

The 3M tape is certainly better than glue. On my first tests, I started with regular glue, but it seeped through the paper backing of the sandpaper, darkening some areas and it also seeped out under the edges of the sandpaper and it didn’t look as clean. I expect you’d have similar problems if using glue products when trying to adhere other paper materials. So 3M would definitely make application a lot easier and look much cleaner.

These are all just such great learning tools!

Recently graduated my youngest from home. Sure miss teaching them when they were little. Would have loved to have my GF when they were elementary age.

Yes, the GF is SO useful for so many hands-on learning projects, I love it! My kids get all the cool stuff

I learned about the Xyron probably from this forum. Another option for applying adhesive to something.

I learned about the Xyron probably from this forum.

I remember that - I ended up with a Xyron due to someone’s posting here. This is a bad bad place for gadget/tool junkies

I learned about the Xyron probably from this forum. Another option for applying adhesive to something.

I think I’ve heard of that before, it’s like a sticker machine, right? Neat idea, I’ll keep that in mind if I do more paper work, Thanks!

Well darn. I don’t know how I missed that, but I think I need to get one.

Very clever tools for learning! Thanks for sharing ! : )