I did a small project for my new mini-lathe tonight. The compound has an angle adjustment on it. The original unit is molded and chromed plastic. It sticks out over the edge of the cross-slide and you can’t really see any indication of where it is supposed to be lined up until you turn the compound 90 degrees and find one small tool nick in the edge of the cross-slide housing. It also only has two degree gradiations. I wanted to try out scoring, so I made a protractor replacement. I will be marking and scribing new references marks once it is installed so that I can see things more clearly. 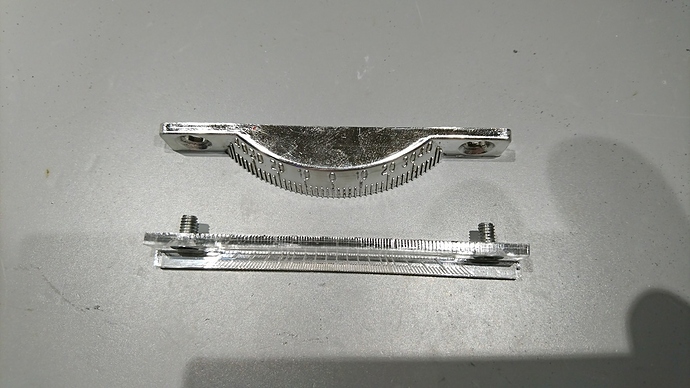 What did you use for that? Acrylic? (Looks great - and impossibly tiny!)

I used Proofgrade medium acrylic. As usual, the glossy sticker on the sheet was not readable to the camera because of the glare, so I had to select the material.

I wanted to check to see how well this type of project could be done. I have several other projects I would like to try now that I know it works.

This is also the first project I did in SolidWorks without making a solid model. I did it all as a drawing. The parametric function of SolidWorks made it easy to adjust the kerf when I accidentally reversed the measurement for the first version. I set up several layers so that the PDF export was imported into the GFUI with different settings options for each layer. This also allowed me to use a common cut between the two sections, reducing the cut time.

I found out what people say about acrylic being smelly. I didn’t notice it during the cut, it was only afterward that I smelled it. I think the vent fan should run at least a few minutes, 5-10, after the cut concludes and should continue to run even if the door is opened.

It’s in the hopper for the fan to be under user control one day. (They’ve actually lengthened the post processing fan time since the early PRU days and it helps a lot.)

And if you think the cast acrylic smells bad, don’t ever try to cut extruded.

This is one of the projects I want to make when my GF makes it here. Care to share the SW file…