I have had the GF+ for less that a week as of 1/5/19. In laser cutting some 3D truss designs that I had previously cut on a band saw, I noticed a way lot of smoke coming from the GF.

So I used some window strip tape and metal tape to seal out openings around the GF. It did not work. Smoke Smoke and more Smoke. Then I decided maybe I’ll read about “leaks” on the forum. After reading some threads here it was clear that Dryer vent connections possess FLAPs to keep critters out of the venting that flap-open when an actual Clothes Dryer operates. In my set up I have two(2) flaps; one at the wall interconnect and the other at the outside port.

However, the blower motor on the GF is not as powerful as a Clothes Dryer blower; so the flaps remained partially closed and I was getting a backup into the GF that went into the room.

I removed both flaps (and intend to add a open grate at the outside port that should keep small critters out). Restarted my cutting and now no more Smoke in the room.

I need to read more!

Nice job troubleshooting! I’m replacing the hose that came with the GF this weekend and sealing some gaps.

I don’t think you want to seal up the GF itself so much… it sucks air from the room and should exhaust out the the back.

This group is definitely full of so much helpful info!

Good point about the sealing; I live in Chicago so I know about sealing up windows and doors.
Just afraid to unseal it.

It’s designed to operate under negative pressure. Unless you have an obstruction, the smoke will clear out the fan through the back.

However, the blower motor on the GF is not as powerful as a Clothes Dryer blower; so the flaps remained partially closed and I was getting a backup into the GF that went into the room.

It should work fine for a single flap (outside) and the standard hose length with only a couple of 90 degree bends. If you go with longer hose or more bends or additional flaps, the fan may not open both flaps but then you’re not sticking with the recommendations for venting either (10’ of hose, no more than 2 90 degree bends).

I removed both flaps

Flaps serve a good purpose in keeping condensation and critters out.
I have about the shortest run you can have, but added a boost fan anyway.
It made the outside flap that was about half open go total open to the stop.

It is a Rockler extension - fan - magnetic seal, with foil tape and flex hose joining it all together. 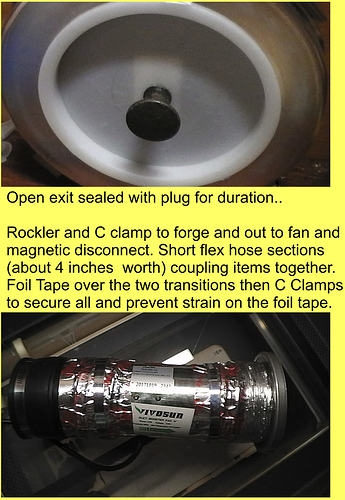 As @jbmanning5 said, it’s designed to operate with negative pressure. If you are seeing smoke coming out, you definitely have some resistance. Removing the dampers/flaps may help in the short term, but I would think you should still be able to use those. I have a flap on my vent and it’s fine, but I had to add a booster fan (Vivosun 4") which is about 3’ away from the opening of my outside exhaust and maybe 6ft from my GF. The key is to find something that is going to match the CFM of the Glowforge fan (200 CFM), but everyone’s situation is a little different.

Thanks–your experience is helpful to me as I’m considering putting in a dryer vent like system instead of having to open a window & block area not covered by the vent all of the time… and glad I already bought a booster fan, since having the louvers not only helps keep small critters out, but cold air blowing back in… but more likely where I live, the often windy days might keep the louvers closed or blow back in against the exhaust–so will need one of those angle covers to keep the wind off the louvers directly… And may allow me to use my machine on the really windy & rainy days, too, since the window I use is on the high exposure side (for now–tossing around ideas for rearranging my studio in addition to getting a good workbench for Buckaroo)…

I have a multi-flap single louver, it works perfectly.

I also just upgraded (literally today) to an insulated exhaust hose, it is so much quieter now.

You know, you could probably sell those as a package deal!

May I ask you for a link? Local home improvement stores have zero here.
Thanks!