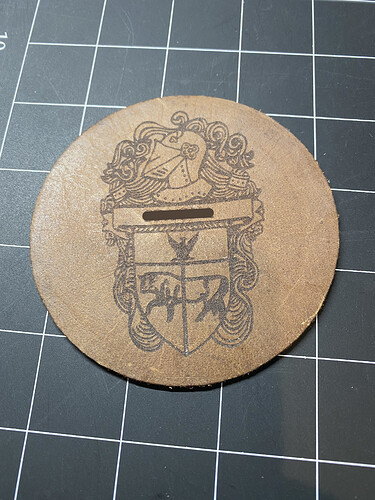 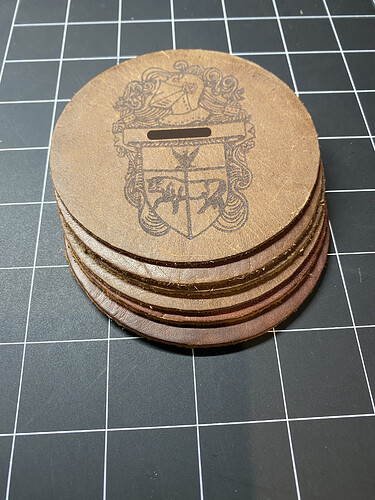 Those are cool. You should try them on slate too. 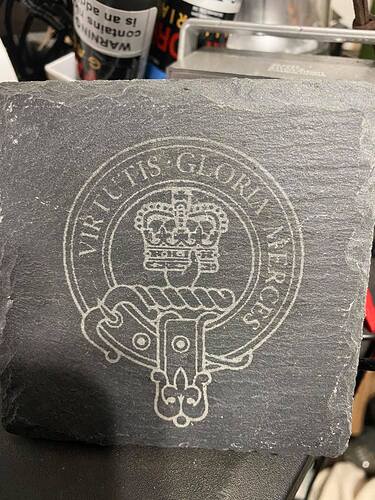 I do my coasters mostly out of Lowes white tile. The leather looks great, but out of my budget for coasters.

You can get leather on Amazon and ebay. I also go to Skycraft in Orlando FL and they sell scraps there at a reasonable price

Going to have to get a family crest made. Probably will not have a knight on it…maybe a couch or Laz-e-boy And a laser. Great work!!

I have one of those funny family crests too. It involves a shovel and other tools, coffee cup etc.

I don’t really know much about my family crest. I know my family originates in Wales, but that is it. Last year, for Christmas, my son-in-law bought me a “Lordship”. It is pretty scammy, but it basically says there is a 2x2 plot of land on some Scottish noble land that is reserved in my name or something like that, and that I can put “Lord” on my plane tickets or Driver’s License if my state allows it. (It doesn’t) But it did come with a semi-cool family crest…I might use that. (I also assume the billion other suckers who bought their lordship have the same crest)

I know that the crystal with the crest was in my parents house since at least the 70’s. But could be fake too.