Question for anyone who has done mixed medium with GF/Leather working hand tools. When working with an image that you want to use tools to texture, is it practical/more effect to score your image onto the desired area and then use hand tools to do the rest of the work or is it more along the lines of if you start with the laser it needs to be lasered all the way though? I’m trying to plan some arm bracers that will most likely have an image on them ( will be for a cosplay that I’m working on) and I want at least one ornate image but not sure the best/ smoothest application of what I want.

Update: so last night I tried to cut some “stamps” using the stamp maker setting, it ended up not being a deep enough groove to press the leather, I then attempted to make 2 more using standard engraving settings and it still ended up not turning out exactly how I thought it would be. Tonight I grabbed a test scarp of leather and was able to see how it would look engraved, and while not bad per say, it’s not as Sharp as I was hoping for. 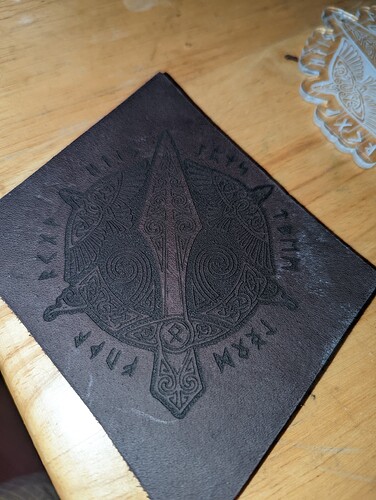 So what does a crafty Creator to do with some of the left over parts of acrylic that can’t be used as a stamp? Glad you asked! Threw it on the forge once again and cut a wee little hole and now it’s a new Christmas ornament! 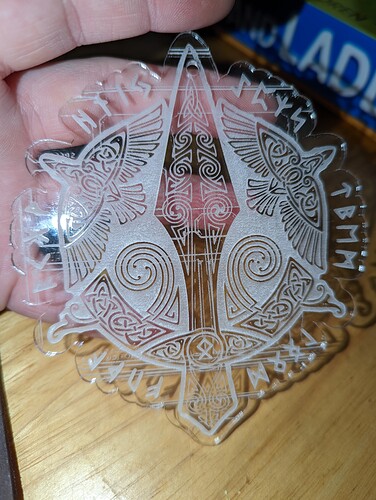 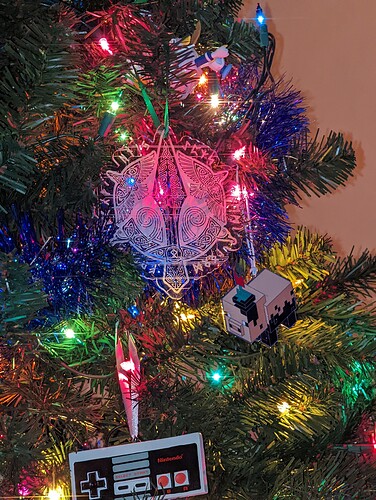 It depends on the look your going for since the laser actually removes leather and traditional ‘leather carving’ is sculpting without cutting/removing leather (generally). Do you have a pic of something like what you’d like to make?

So I was thinking about something in the remote area of this : Viking Armor Leather Bracers Archery Arm Guard LARP Bracers | Etsy
Now I’m not expecting it to be that perfect, however trying to weigh my options, I know that score would remove much less then engrave, but again, trying to figure out the best option.

Those are lovely, and definitely stamped in one go. Much like Oberon’s famously luscious pieces. You can tell by how flat and even the debossed areas are. To replicate that look I’d skip the hand tools altogether and just make a stamp - delrin would be best but acrylic would also work if you’re not making more than a few of these. Given the size of bracers - a cut layer glued onto a solid layer and then attached to a solid base like plywood would be much faster to GF than engraving.

Commercial presses are quite $$ but you can easily make something that could stamp something this size from Harbor Freight parts - google “diy bottle jack leather press” for lots of options. Alternatively, you can also roll stamp it using something like a Sizzix Big Shot or rolling print/etching press. (basically blind letterpressing into leather instead of paper, I would go this route since I do already have a couple of those and it would be faster)

Use a nice thick leather that isn’t too dense to get maximum relief - bullhide would be quite nice.

The first test is 6mm, and then I have a bunch of 3 or 4 mm. Thank you so much for that VERY helpful tip! I think I have some great ideas for making some kind of press.

I’ve experimented with putting the tooling design on using a very light engrave, to save having to trace it. I never really got it light enough not to show after tooling, but maybe someone with more tooling experience could do better.

Still, I have cut designs around the edges and then tooled a design in the middle. Pretty sure I posted some of them, lemme go look, and I’ll update with a link!

Scoring tooling lines on leather Made on a Glowforge

'Way back in prehistoric Glowforge days there was a discussion on this: The final consensus was that you couldn’t really engrave / score with the GF and then tool your leather. Well, fortunately for me I hadn’t read that discussion yet, and had the same thought the other day, so I tried it. I cut a circle of PG thick leather, did a draft score (with masking in place) of a rose outline, and then tooled it. You can see the score lines, but I think that has more to do with my lack of expertise …