Me: I think that I have too much Star Wars stuff made on the

Also Me: Wonder if I can use EL wire to light up an acrylic Death Star?

This is just a prototype to see how it looks with the EL wire versus/in addition to an LED base. At some point, I would probably build a custom base to both control mechanisms, and maybe wire it all to be controlled by one switch, but for now, this works. I ran the engraving layer twice at diminishing heights to get the EL wire to sit comfortably in the trench. Need to clean up the acrylic, but otherwise it turned out ok. Basically, just a way to add multiple colors to edge lit acrylic. 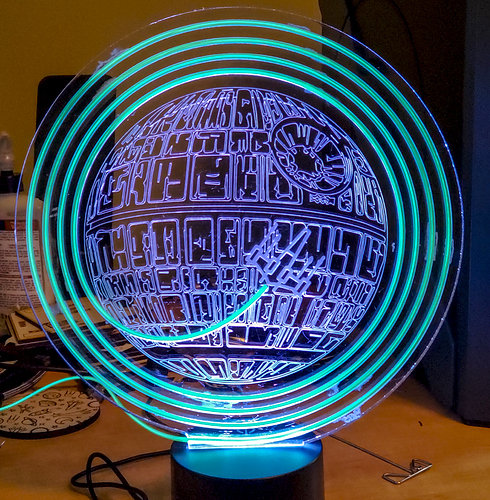 Here is the EL Wire that I got off Amazon.

Oooooo, now I want some of that stuff. This looks really cool!

I haven’t yet been happy with any inverters I’ve gotten for EL wire due to the noise they make - how are the ones you linked to?

I didn’t think you could get ones that did not make that noise.

Very neat POC! Brings a lot of possibilities to things!

Also… “too much Star Wars stuff.” That’s a thing?

They al make noise, but I’ve heard that some are less annoying than others – but the ones I’ve tried so far (relatively limited since I haven’t played much with EL wire) have been almost unbearable…

“too much Star Wars stuff.” That’s a thing?

Get your EL wire and power inverters from Adafruit.com

you will be happy.

Ooooh…they have el PANELS! Now I have to think of something to make with those!

Now do one with Superman reversing time!

Ooooh…they have el PANELS! Now I have to think of something to make with those!

I just placed an order with Adafruit yesterday. Why does it always happen that I don’t see this stuff until after I place orders!

Thanks for the Amazon link - I usually get my el-wire stuff from Adafruit and hadn’t even thought to look at Amazon.

Adafruit has the super bright (relatively speaking) el-wire which is good for daylight/roomlight applications. Eats twice the power but that’s not an issue for these things.

You can get quieter ones, they just need to be properly designed and not the cheapest ones out there.

I’ve never really noticed the Adafruit ones making noise. Maybe my hearing is impaured at whatever frequency is the bothersome one?

My son loves that stuff. He thinks its hilarious that there are things he can hear that my wife can’t. I guess I still have slightly better hearing, because I often can still pick up those frequencies.

He thinks its hilarious that there are things he can hear that my wife can’t.

A friend of mine started losing his ability to hear higher frequencies about 20 years ago. He became less and less able to hear his wife talking to him.

She thought he was faking

Useful for ringtones that older adults cannot hear … except, some of us can …