Simple project. Make a simple frame for an LED matrix project. Overall size of matrix is 25 x 12.5 inches so a good challenge for the pass through. It worked well on this try. result is about 30 inches long by 15.5 inches wide. Small tabs on the backside of the matrix are glued to the frame from behind. Mount for wall and power plug are were also cut on the forge. I am happy with the result. 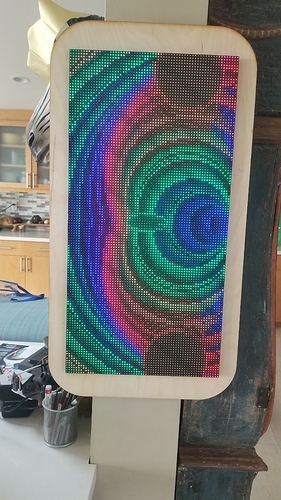 But, same file did not work as well on the next attempt. Strange issues with my browser where the preview was missing so I had to accept the proposed alignment on faith. Given how well it works when it works at all, and the alternative was wasting the 32 x 16 sheet of birch, I gave it a shot. That went well until the last pass where GF was really wrong. Restarting the browser cured the issue but it was too late to save this part. 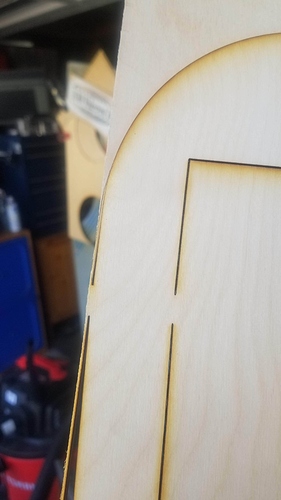 The frame is cool - I keep on thinking I’m gonna try getting into programmable LEDs (beyond the strips I buy pre-done) but until I have the time to sit down and learn how that’s definitely a back burner!

Sad about the missed spot. I’m thinking a quick cache clearing prior to starting a passthrough project may be in order! I have mine set to auto-clear on exit so I don’t have that issue, but I do have to retype things since I’ve cleared its memory…definitely a tradeoff.

I bet you could save that particular piece by lining up and cutting those (presumably) 4 spots, but it’s gonna be ~1/2" too long for that LED matrix so maybe not worth the effort :-/

The miss was due to the auto align rotating the part. Thus the gap was only one of several flaws.

Nice! Where do you get the matrix? Arduino run or something else?

Wow, that a lot of LEDs. When do we see it in action?

Technical details. These are made from P5 LED Matrix panels, each with 32 x 64 LEDs that are more commonly used in large video signs or jumbotrons. In this case, I have combined 4 such panels to make an array of 128 x 64 LEDS or 64 x 128 LEDs depending on configuration. That is is a boatload of LEDS ( 8192 to be exact).

The brain is a Teensy 3.6 which is an arduino-like board. Arduino based code is being used. I wrote the bulk of the pattern code, I borrowed the bits that get it to work with these panels. The teensy is running the panels through a SmartMatrix shield in order to drive this particular style of LED board. This is about as many LEDs as this model of teensy can handle. Adding more LEDs would require more more memory and a faster processor or the speed would suffer. There are newer more capable teensy boards and new shields coming that should let me double this (if I was hankering to).

One good thing about these panels is that they are not power hogs. So a 4A, 5V power supply is capable of supplying the needed power. I am careful to not run them all with a bright/white pattern.

Videos and photos of the matrix in action can be found here and many more videos the patterns during development (when this was still 2 square matrixes joined via a cable) are here. The camera does not do these justice.

I also made some frames with smaller (12 x 20 in) wood sheets and pieced them together. Used alcohol based wood dye to color them. 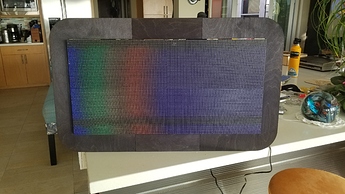 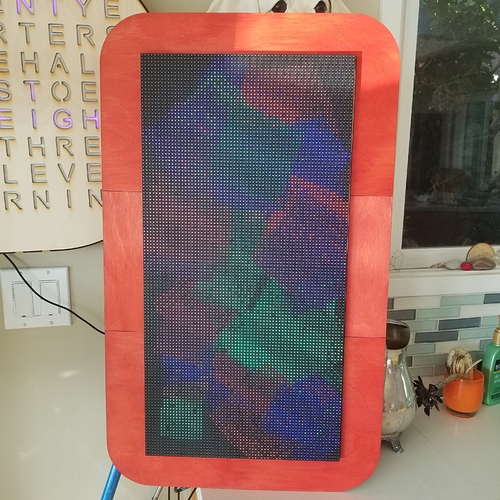 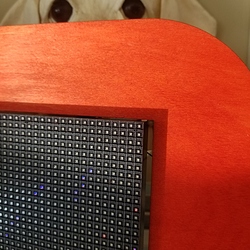