Bought a neat box design file off of Etsy, then changed up the details to images from the Legend of Zelda video games!
I’ll be making these as gifts and maybe sell a few.
I still need to tweak the design a bit to make the little nail holes smaller, but this is pretty much what they are going to look like 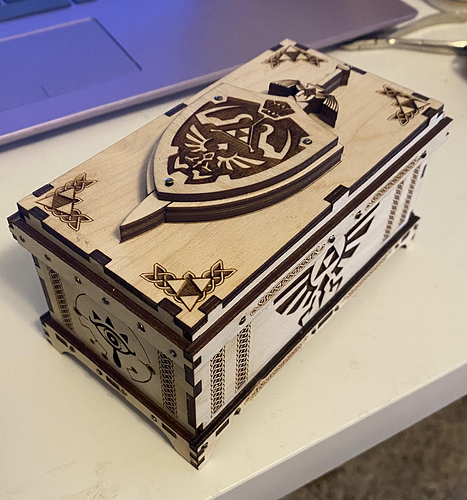 I love the Zelda theme you added!

But is it allowed/ethical to resell a design you bought off Esty?

A lot of stuff on Etsy is sold with commercial rights

Depends on the seller. I sell mine with commercial rights included, but not everyone does.

That is awesome, if they allow it then.

It’s gorgeous! Does the sword actually come out, or just look like it could?

That is true… I probably wouldn’t try to sell someone else’s copyright material.

I love it though, and it is great as a gift!

The file was for limited commercial use

as long as I’m not selling the file itself, and just selling what I make!

I can make them with the sword removable, because it is a separate piece, but on this one its just glued down.

My mom used to say to me, “If everyone jumped off a cliff, would you do it too?”

I wouldn’t want to be the only living person on earth!! If everyone else jumps, I’m jumping too

But in all seriousness, I am planning on doing more research on that if i plan to sell them online or anything.

Welcome to the forum. Nice box, and important discussion about legal rights to sell licensed items.

I can make them with the sword removable

Always a good idea. It’s like an Easter Egg. It will bring a smile to anyone who discovers that they can withdraw the sword (and likely conjure up a few fantasies of Arthurian England

That is one awesome box! Is Link buried inside?

I have a granddaughter named Zelda and would love to get the design if you are willing to share it! Brad G.

Just wanna say… You may think “I see others selling it!” and expect to never get caught. But then you do get caught. Catan came after me and told me I cannot sell my board unless I remove the name Catan from the listing title, the photo, the description and the meta tags. If I wanted to include those, I would need to be officially licensed. It makes me wonder if some of these people ARE officially licensed, because one person has a whole website. They are most likely licensed. But then others most definitely are NOT and yes, they WILL get taken down (seen it happen a few times).

When it comes to using someone elses IP you have to be careful. Most big companies don’t mind the small things (pins, stickers, art prints) but when you start making bigger and fancier things, they will notice. It’s a matter of company pride and making sure nothing big will ruin their image, even inadvertently. Technically, this person probably shouldn’t even be selling the file.

The original file that was sold didn’t have legend of Zelda stuff on it, I added those details.
And again, I said I would research if I ever do sell them.