A friend of mine has a project in mind and I cannot find the right kind of material for it. I need something that is soft, flexible, and non-slip, kind of like a yoga mat. Ideally it should be something like 1/16" - 1/8" thick. Thinner than 1/16" would be OK if it was durable and non-skid.

It would ideally be available in a few colors, and including blue and yellow.

Lastly it should be cheap, a few bucks per square foot.

EVA craft foam is the closest thing I have seen so far, but it isn’t grippy enough. It scoots around on a slick floor.

I did find thin, colorful neoprene for sale… but I am finding it hard to get consensus on it it is safe to cut or not.

neoprene contains chlorine, but in a lower quantity per gram than PVC. Consensus appears to be that one of the worst things to cut in your laser cutter is PVC (due to the HCl gas that will eat the parts and isn’t good for you to breath) so my guess would be that neoprene is a close second. (Of course, there many things that are worse, but among the stuff people want to cut, but probably shouldn’t, PVC appears to be the top of the list.)

I think those are silicone which I think is pretty expensive per square foot.

Unfortunately I don’t have a suggestion for the original request. There are poly-urethane yoga mats which do produce unsafe gasses when burned, but depending on your risk tolerance and venting solution might be acceptable.

I need something that is soft, flexible, and non-slip, kind of like a yoga mat.

Why not use yoga mats?

From what I read, they are PVC.

I use Plastozote all the time in my box making. Might do the job for you, not too sure about it’s wear resistance though.
It is very similar to my yoga mat if that helps.
http://www.polyformes.co.uk/plastazote.html

You can buy PVC-free yoga mats. Just search google for “natural yoga mat” for a bunch, usually natural tree latex. No idea how it cuts or would be laser-safe, but at least it’s not PVC.

I found a supplier for neoprene made from “Styrene-Butadiene Rubber” which is safe to laser cut, and apparently cuts well. I’m trying to get samples.

Here’s a Trotec page discussing a simple SBR neoprene project. Looks like a nice alternative to leather for some items. 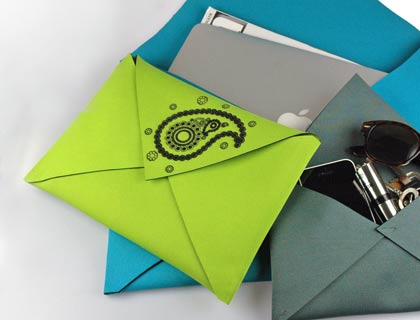 How to laser-cut your own neoprene clutch - MakeTank

Laser cutting is an extremely versatile technology, here is a simple expression of its applications