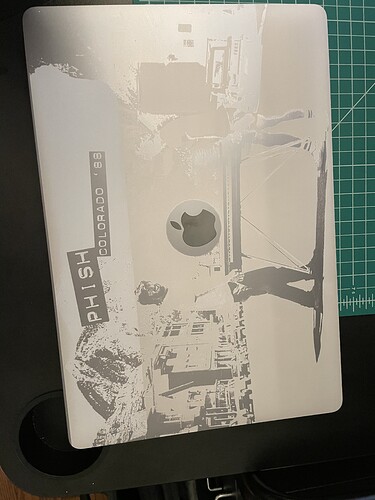 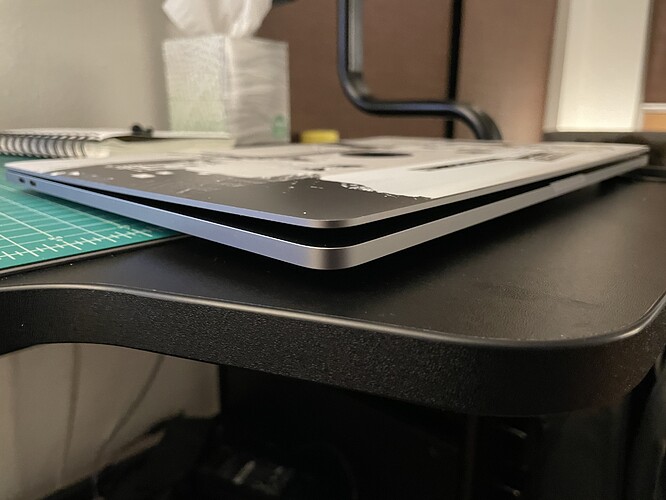 Attempted a image engrave on a MacBook Pro and got a warped display. See pics. I’m pretty sure this was due to the large, complex image burning too much material away from the display but not sure. I wanted to show everyone so you don’t make the same mistake. About 60% through the image, the display became warped and popped open. Not only was the display damaged but because the MacBook was closer to the laser, the image was blown out. So just beware when doing a MacBook Pro to keep it minimal. You can see in the video the moment the display pops up. IMG_0004|video](upload://4LHrVVeRpHd9VIDD3Y5Z4m92E2L.mov)

complex image burning too much material away

So lasering doesn’t remove significant material, but it does add a lot of heat. I’d think this is a warping from the heat.

Thanks evansd2. That was probably it. Maybe pausing the burn halfway through would have helped. Maybe it does already but I feel like there should be a warning when using the MacBook Pro preset.

Which I why I don’t see why people want to take the risk and laser their devices. First, if it ever breaks, you’ve lost the engrave you paid for. Second, when it fails, if under warranty, it will automatically void the warranty. Electronics aren’t built for that kind of heat.