Did you get a chance to check for buildup of crud on the fan grill?

There is little to no accumulation of crud on the back of the fan, I have only two bends, and the total run is 68”.

Can you show the exhaust hose connection? 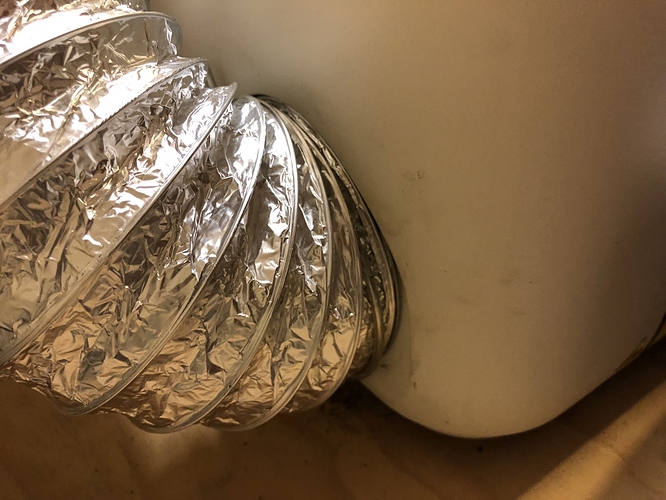 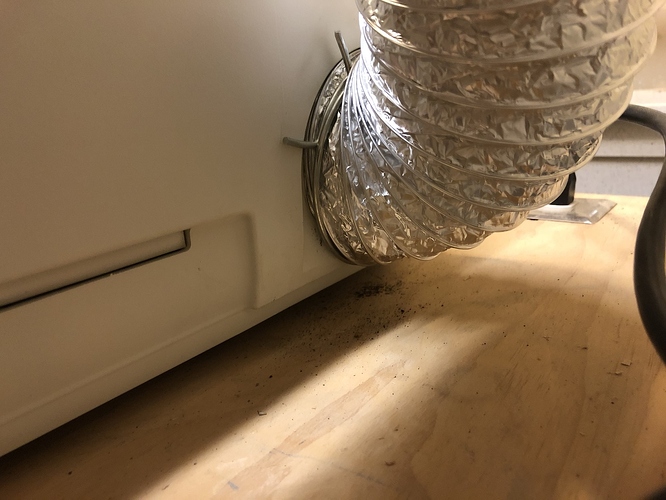 Could I please get a response from GlowForge support?

Seriously! This ticket’s been open for a week! The other (My Glowforge has picked up a nasty smoking habit) is open for a frickin’ MONTH! What happened to a max of 3 days to hear from Support?

Maybe we need to ping @Rita?

The residue on the table is dirt that fell out of the connector hose when I detached it to inspect the fan again and re-verify that the hose is clear.

Hmmmm…this is seriously weird . I hope support gets back to you really soon

A way to test this would be to run the machine with no hose attached at a very low power and nothing on the bed. Then while the fans are running go around the lid joints with a joss stick and see if the smoke is sucked in or blown away.

If the machine is still under positive pressure then the outlet fan must be running slower than the inlet fans and the machine is definitely faulty. If it is under negative pressure it points the finger to the exhaust hose being constricted but wouldn’t be conclusive.

An interesting fact is that according to @scott.wiederhold’s diagram here: https://raw.githubusercontent.com/ScottW514/GF-Hardware/master/wiki-images/Interconnect-Diagram.png the intake fans have more than twice the airflow of the outlet fan. So it looks like it relies on software to ensure the pressure is positive. If an inlet fan controller went short circuit it looks like it could easily generate positive pressure.

Another day without a response from support. Could I please get a response to this support request which was opened 8 days ago? My initial request was submitted over a month ago and has also not received a response from Glowforge Support. @Rita @dan

and has also not received a response from Glowforge Support. @Rita @dan

I don’t know you’ll be successful getting their attention by just tagging them here. You are likely better served if you send them an email directly.

You are likely better served if you send them an email directly.

Well, they’ve stated multiple times that posting here or e-mailing delivers the same results.
Is it true? Who knows.

I recall seeing a note from support that both “Problems & Support” forum posts and email are appropriate channels, but that they de-prioritize support cases when people reach out via both email and the forums for a single issue.

If this isn’t the case, I can send an email as well. For now, I’m trying to stick with their suggested process.

Good point. Dan did say that specifically.
Personally, I think tagging is the best bet.

Correct, except he’s not gotten a response from the month-old one, nor this one that’s a week old. A separate email to Rita & Dan, not Support should not open a new case but is a direct reach out for help and feedback that the 3-day standard is not being remotely acheived.

but that they de-prioritize support cases when people reach out via both email and the forums for a single issue.

Correct. But I wasn’t suggesting sending it to support@glowforge.com but directly to Rita &/or Dan. And it’s not dual report, but reaching out to point out that they said tickets get 3 day attention yet you have 2 tickets that are a month and 8 days without a response respectively. It’s entirely possible someone missed these - they have noted on a few P&S posts that they’ve missed some.

It’s respectful escalation vs creating multiple reports on the same thing. I don’t believe when they’ve missed their targets by an order of magnitude, that it’s necessary to continue trying the process that has already failed.

Given that support seem snowed under looks like the problems we see in this forum are only the tip of the iceberg. That doesn’t look good for a population of less than 10000 machines.

Yes but is it sustainable to employ so many people to support so few machines?

The hardware needs to be much more reliable and the software more robust and with proper error messages. You should be able to throw any SVG at it and get the result you expect or a descriptive error message. Doing odd things, like the way it interprets vector artwork is bound to bring endless queries.

is it sustainable to not reply to customer support tickets for weeks?