We were just talking about meranti plywood, which is sometimes called “philippine mahogany”.

Its buried a bit in this thread:

1/8 Birch Plywood (not proof grade) Beyond the Manual

So I am experimenting with my new Glowforge. I don’t want to use the more expensive wood (yet) until I have this figured out. So I ran to the hardware store and picked up some regular (not Baltic) birch plywood to play with (.20"). I tried a rather large cut (18x10) at 182/full, 1 pass. It cut most of it right through but it was slightly shallow in some areas. I am thinking it’s probably inconsistent core. I tried again at 2 pass and it didn’t seem to make much difference. Shouldn’t the …

As for proper African mahogany ply, I haven’t come across that.

Isn’t that kind of the point of plywood? Do you not just want a mahogany board?

Isn’t that kind of the point of plywood? Do you not just want a mahogany board?

No, the object is to have the grain running in multiple directions,sometimes you want the core from the same wood.

This is why it’s important to know the difference between Baltic birch and just birch solid at the home improvement stores.

I don’t know what Baltic Birch has to do with anything.

Maybe give a call to a reputable plywood supplier and ask them if they know about availability. They may know if it’s available and may have reasons for not stocking it, if it is.

I have Boulter Plywood near me (http://www.boulterplywood.com/) and they were very helpful when I came in not knowing what I needed or wanted.

You’re making a lot of assumptions about what I know and what I don’t, and none of it is relevant to the OP, so I guess thanks for explaining Baltic Birch to me, but I’m good.

You’re making a lot of assumptions about what I know and what I don’t,

and none of it is relevant to the OP

Completely relivent to this discussion as you don’t understand why someone would want plywood with the same core as the outer plys.

Are marine plywoods generally built with the same wood as core? That might be a good place to start?

Yes,aviation and marine, and hobby.

When you feel it’s time to start with pejoratives it is perhaps time did you go to your corner and calm down .

I took a lot at Boulter’s Marines and they are not built with the same core. I wonder if that’s a semantics issue or proof that the rule isn’t really a hard and fast one.

I’ve never actually seen a plywood (besides baltic) with the same wood in different orientations. I can see why you’d want it, it’d be more stable and all, but it’s probably a more specialty item, like aviation ply and such. Interesting.

I have used the sort of Mahogany ply to good effect but the mahogany is micrometers thin and any attempt to engrave it looks terrible. but if you don’t It can look very nice, as example… 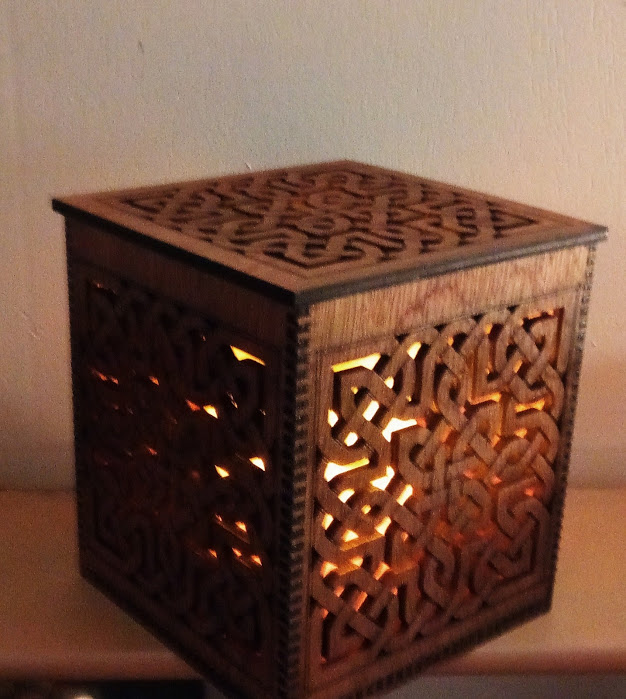 My HD carries the Revolution ply. I used it last week for a shelving unit I was building into a wall. It’s got a nice finish and seemed like just a lighter colored version of traditional luan. I have some leftover that I want to try to see if it’s a good alternative for Baltic Birch for small giveaway projects I make for the Makerspace. But my replacement is enroute so no laser right now.

Neither Lauan or Revolution is near as strong as BB or Oak ply and while Revolution is a bit better than Lauan if engraved you really on’t want to engrave either one, I built one box that after several tries to engrave even with a heavy layer of paint it was awful. Instead I made a design of a lot of scores and that worked well.

The Lauan looks good on both sides where Revolution is only nice on one side, with the other very plain. I did get a yellow-orange stain however that made both look better and quite similar to the Lauan.

The only real replacement for BB is the Oak and I like that better. the only problem is that oak is like the accordion in the orchestra, much more in your face that it is oak grain. while the BB us much quieter and unassuming.

I want to use it for the top of a Cajon I’m planning to make. If the core is different it may change the sound in a way that I don’t want.

Thanks! That makes perfect sense.